SPONSORED: The photovoltaic power market has grown at an impressive rate in the past several years, marked by new utility-scale projects in emerging markets and rooftop PV installations in mature markets. Utility-scale growth is occurring mostly within the world’s sunbelt regions, i.e., Africa, the Middle East, India, Southeast Asia, Latin America, and the western US, while the rooftop segment is dominant in Europe and Japan.

Falling system prices have been a key driver of this recent growth and competitiveness, but upfront costs are only one part of the equation for long-term profitability within the solar power industry. Maximising any given system’s cumulative power output over its lifetime is critical to lowering the levelised cost of electricity (LCOE) and maximising investment returns. The less reliable the system, the less certain the investment. Consider this correlation: when a panel’s expected lifetime is reduced from 25 to 20 years, the LCOE increases by over 20%.

Solar panels are exposed to significant environmental stresses over their lifetimes, including UV radiation, extreme temperatures, thermal cycling and humidity, usually in combination and under load. The current International Electrotechnical Commission (IEC) standards for solar panels are primarily based on a set of accelerated testing protocols originally designed to track panel failure after manufacturing (infant mortality) and not to predict the longer term performance of the panel over its expected lifetime.

The current standards also provide no segmentation by climatic zone or by application, and the environmental stresses panels are subjected to can in fact vary wildly from location to location. For instance, the average temperature in Riyadh, Saudi Arabia, is 27oC, whereas the average temperature in Munich, Germany, is only 10oC, with about nine times the amount of precipitation.

Application type is another important factor; a panel in a ground installation operates at an average temperature of 25oC higher than ambient air temperature, whereas rooftop panels operate at about 15oC higher than ground.

The importance of the backsheet

A solar panel’s backsheet is especially vulnerable to the effects of weathering and repeated stress. The backsheet adhesion, UV resistance and mechanical strength are all critical factors to its longevity, and by extension, the longevity of the entire panel.

The solar industry is witnessing higher panel failure rates as unproven, poorly performing backsheet materials appear on the market. Cracked and damaged backsheets can have significant implications for a panel’s operational condition and safety, i.e., they can cause the panel’s electrical insulation to fail, posing a safety hazard and a potential ground fault.

Data from a global field survey of solar panels, conducted by DuPont, showed that 22% of panels studied were affected by some form of visual degradation with an average of four years in the operation. The DuPont survey also found that the top two components showing defects were cell and backsheet, with cell accounting for 11.3% and backsheet accounting for 7.4% of defects, in the panels studied. 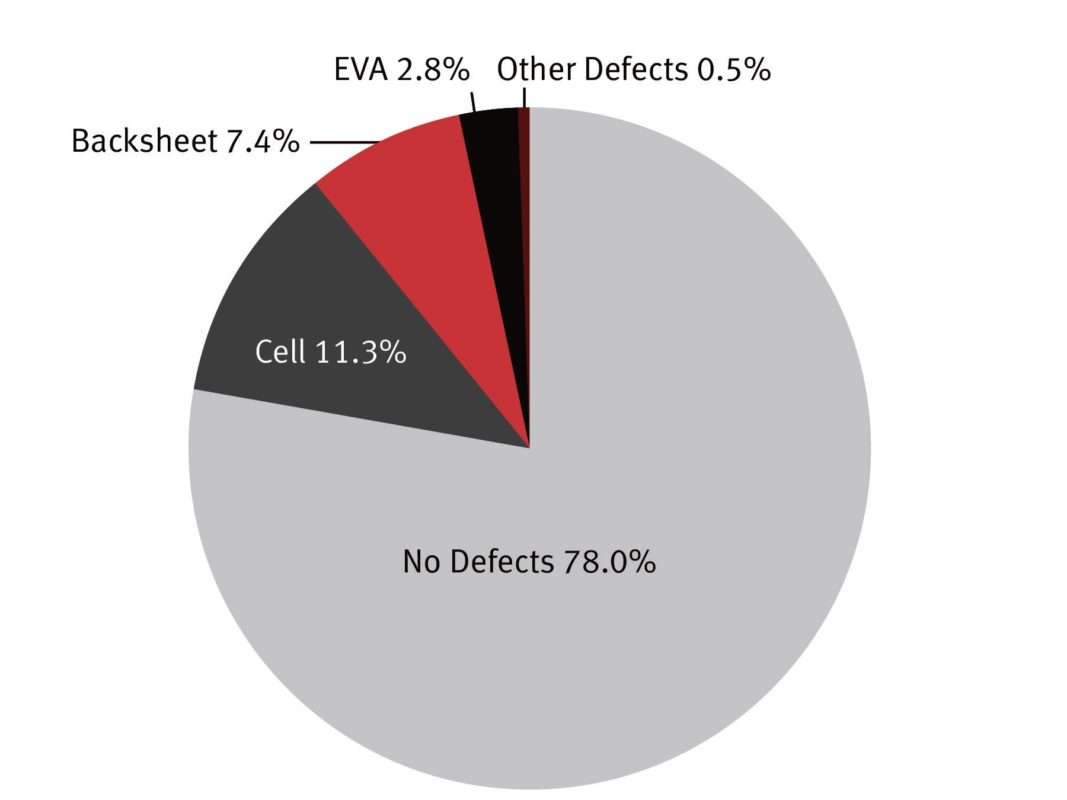 Results of the Fraunhofer Study

The Fraunhofer Institute for Solar Energy in Freiburg, Germany, conducted round-robin tests on solar panel backsheets for analysing the effects of UV stress and at different temperatures.

The key finding in the Fraunhofer study regarding yellowing sensitivity was that yellowing starts at UV wavelengths of less than 360nm and that different backsheets degrade differently with UV exposure. Fraunhofer observed that yellowing only requires the presence of UV intensity to trigger degradation, and, as noted in the DuPont field observations, it shows a strong dependence on temperature. 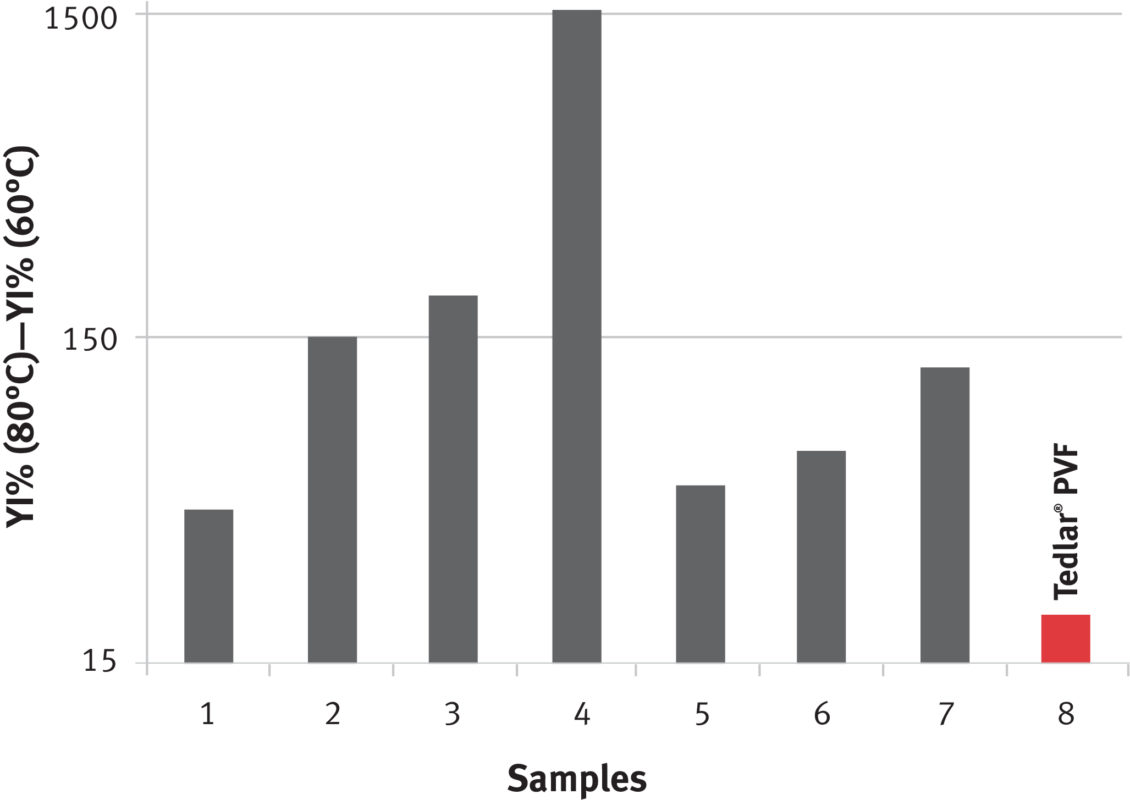 In DuPont’s field observations, the rate of backsheet degradation increased over time with all backsheet materials except for Tedlar polyvinyl fluoride (PVF). In addition, the rate of degradation was very low in older photovoltaic systems in the DuPont field survey, because most of those featured Tedlar-based backsheets.

The need for better testing standards

In the absence of reliable quality assurance (QA) standards, field observations are invaluable for determining best practices for solar panel materials selection. However, it has been clear for some time that new accelerated testing protocols are needed to mimic the forms and extent of materials degradation observed in the field. Existing IEC quality standards are not stringent enough to differentiate between the quality of different backsheet materials.

Developing an alternative accelerated testing methodology rests on the rationale that tests need to match actual degradation observed in the field. Until now, lab testing methods haven’t been sufficiently demanding to demonstrate the impacts of long-term aging on PV modules.

With this in mind, DuPont has introduced a test method called Module Accelerated Sequential Testing (MAST), which consists of a series of stress tests applied to a single module. The tests follow this general sequence: exposure to damp heat, followed by repeated UVA exposure and thermal cycling.

DuPont proposes sequential MAST testing to help replicate the main forms of degradation affecting backsheet materials. The MAST protocol combines the most critical stresses of the operating environment – UV irradiation, humidity, temperature and temperature cycling. The levels of these stresses are taken from field exposure levels and analysis of degradation of fielded modules.

The MAST method more accurately predicts the long-term performance of PV module materials than conventional test methods, and the results MAST produces are more consistent with field observations. MAST testing utilises the critical stresses from the field and matches results from the field for the major backsheet types – PET, PVDF, Polyamide and Tedlar based backsheets.

Addressing the problem of backsheet degradation

As noted earlier, the PV market is growing especially fast in higher-temperature climatic zones and in applications that can be harmful to panels, e.g., rooftop, and DuPont’s field observations have demonstrated that the rate of degradation is significantly higher in hot and arid climates and on rooftop applications.

The backsheet sub-component is particularly sensitive to environmental stresses, with a rate of degradation that increases significantly with thermal stress and UV exposure. Yellowing is a sign of degradation that affects a backsheet’s mechanical integrity. Cracking and delamination are particularly critical defects – raising the likelihood of a loss of electrical protection and increased risk to personal safety – and, when observed, imply the need for panel replacement. A DuPont case study has shown that the economics of replacement can have an even greater impact than that from power loss over time.

Solar panel installers can mitigate these risks by selecting the most robust materials with respect to UV and thermal stress factors. Tedlar PVF has proved to be the most dependable backsheet material through the years, as shown in the global field surveys conducted by DuPont. This observation was supported by the Fraunhofer third-party study, which demonstrated that Tedlar PVF based backsheets are the most resistant to yellowing and the stress of higher temperatures.

This article was written by DuPont and originally appeared in PV Tech Power 12, the leading technical resource for the downstream solar industry.