Solar cell production in 2018 represented change on many fronts, but may be remembered as a year during which Chinese-owned companies made further strategic moves as part of the current Beijing mandate to position the country as a high-tech manufacturing global powerhouse.

This article explains how this is having a dramatic impact on solar cell manufacturing outside the control of leading Chinese-funded companies, and what this really means in terms of solar cell technologies and industry-wide technology roadmaps during 2019.

The content and scope of the article also sets out the topics that will form the 2-day agenda of the forthcoming PV CellTech 2019 conference in Penang, Malaysia during 12-13 March 2019.

Understanding why cell production has changed

When the first wave of capacity expansions occurred in China about ten years ago, it was followed by various forms of vertical integration during which many companies established GW-scale cell and module manufacturing facilities. While this occurred, there was still a place for pure-play cell production in other countries such as Taiwan.

As a result of this, cell production globally saw top-10 lists comprised of different Chinese and Taiwanese companies, alongside more established producers such as SunPower, REC Solar and Q-CELLS (subsequently South Korean controlled Hanwha Q-CELLS). For a while also, representation was provided by Japan through companies such as Kyocera and Sharp Solar.

At about the same time as Taiwan cell production grew, there was a dramatic decline in cell production in Japan where costs were simply too high to compete with Chinese and Taiwanese manufacturing benchmarks.

Over time, Chinese companies took more of a lead, based purely on capex to scale from 1GW to the 3-5GW level. Outside China, the only company to match these capacity expansions was Hanwha Q-CELLS, with ambitious new factory builds in South Korea.

However, in the past couple of years, a further shift has occurred during which Taiwan cell production has been scaled back, overlapping with the growth of new pure-play specialists in China, most notably Tongwei and Aiko. These new entrants are woven into the fabric of China manufacturing aspirations, being central to the supply-channels that extends back to wafer supply from the likes of LONGi and Zhonghuan, and forward to anyone making a module in China.

Notably, Tongwei and Aiko did not seek to reinvent the wheel: rather, it was more of the same p-type mono and multi, but with the 1GW benchmark of before becoming a staggering 10GW, and expansion plans in multiples of 5GW that appear to rather ignore any red flags in terms of market supply, trade-wars and upstream over-capacity fears.

In fact, without tariffs in place, it is simply impossible for non-Chinese companies to compete with the likes of Tongwei and Aiko, if p-type cell business was the end game. Thankfully, this is not the case. What is has done however is force cell production outside China to concentrate on value-added differentiation, which is basically another way of introducing n-type into the discussion here. More on this below as in relates to the 2019 cell production landscape expected.

The first thing to point out is that the list below is preliminary and will be subject to some minor tweaks once we learn more about cell line utilization rates during the past few months of 2018 of all the major cell producers today. 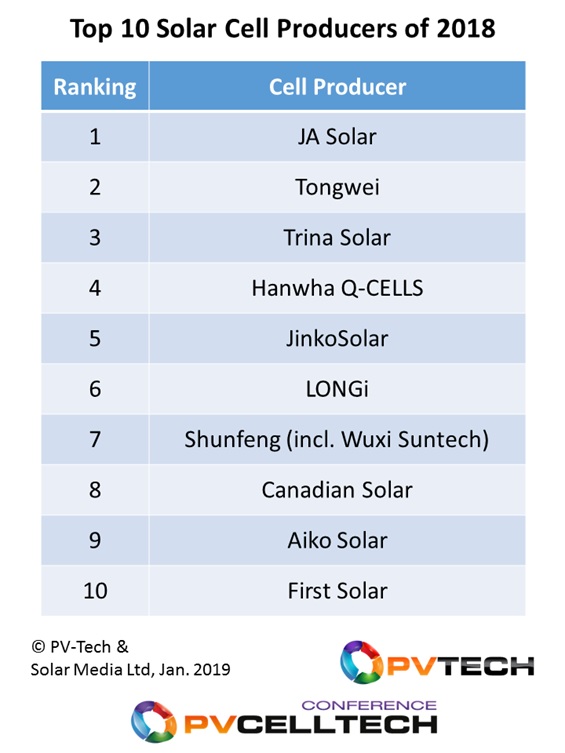 We have a grouping of four companies (JA Solar, Trina Solar, JinkoSolar and Canadian Solar) that can be viewed as global module brand-recognized integrated cell/module producers that all produce multi-GW of cells in-house (in both China and Southeast Asia facilities), while using domestic Chinese third-party cell supply from the likes of Tongwei and Aiko, for example. JA Solar and JinkoSolar have largely repositioned as p-mono PERC cell producers, Trina Solar is in the process of making the change, and Canadian Solar still retaining a multi-loyalty of sorts.

Hanwha Q-CELLS is largely one of a kind when looking at the companies, and the closest thing in solar today that allows us to draw parallels with Korean conglomerate activities in the flat panel display sector. From a global module brand perspective, the company is similar to the four major Silicon Module Super League (SMSL) players above.

Cell production differs as having a major contribution from South Korea that has been prioritised in recent years for capex, versus the legacy Solarfun sites in China and Q-CELLS in Malaysia.

LONGi Solar also is unique in our top-10 listing in many ways, most notably in the extent of its full value-chain (ingot to module), but in particular the scale and positioning of its ingot pulling business in China. More coverage on LONGi Solar will feature in our subsequent reviews of poly/ingot/wafer production and module-supply blogs on PV-Tech over the next few weeks.

Shunfeng (or from a cell production standpoint Wuxi Suntech) is another one-off in the category above, and the leading example of a legacy Chinese cell/module powerhouse (Suntech) that has managed to sustain production levels at meaningful levels, propped up by the domestic market and in the absence of overseas cell/module options or strong global module business levels. Capex limitations have prevented any major shift from p-type multi production.

As mentioned earlier, Tongwei and Aiko should be grouped together. These companies have been one factor behind the demise of the Taiwan cell industry, and their contributions to cell production will only increase during 2019. It remains to be seen if 20GW cell capacities per company with single-digit margins will simply cause a domino effect of removing even more cell competitors, or if they will get diverted from their current raison d’être through illusions of grandeur (such as trying to become global module suppliers).

Finally, we have the only meaningful thin-film solar cell producer globally today, First Solar, more on which below.

Therefore, it is not crazy to have doubts about n-type capacity expansions in China that have occurred in 2018 and will continue during this year. I will return to this more in other blogs, as trying to explain fully does merit discussion in its own right.

For now however, it should be pointed out that virtually nothing from the top-10 companies shown above is coming from n-type in 2018, and the strategies of almost all the n-type entrants in China in the past 12-18 months are focussed entirely on meeting domestic carve-out needs from Top Runner variants.

But for equipment makers, it is for now a period of capex excitement. And why not? The stakes are very high, and if a few of the new n-type GW plants shows success, this could change the entire solar industry overnight and force n-type onto the immediate roadmap of every solar cell maker globally.

In 2018 also, many of the p-type cell leaders made first moves into n-type territory and new capacity will come online here in 2019 for sure.

The last major expansion for bespoke deposition equipment in the solar industry (PVD/PECVD) was about ten years ago, in the form of turn-key a-Si based production lines. Several billion dollars was spent with the likes of Applied Materials, Oerlikon and ULVAC, endless resources were afforded to marketing campaigns; today, a-Si is no more than a token gesture and for all purposes dead.

The current n-type landscape is very different however, as it is still the natural roadmap evolution of everything p-type which is over 90% of solar industry annual consumption. And today mono is dominating multi, and we have low-cost ingot pulling in China ready to flip to supply n-type capacity additions. This changes everything, suggesting it is a matter of time for n-type, but just maybe not via the first wave of companies undertaking major investments during 2017/2018.

If awards existed for most-impressive achievement for cell technology in mass production, one may decide First Solar was the winner here in 2018. It is hard to convey how impressive the move from Series 4 to Series 6 has been, or indeed the mere fact that it occurred in the first instance.

In contrast to almost all the capex in China by c-Si cell market-leaders – which was low-risk, low barrier-to-entry large-scale roll-out of known p-type multi or mono (Al-BSF or PERC) that was originally pioneered in mass production by Western companies – First Solar’s Series 4 to Series 6 came on the back of 20 years of in-house R&D investments and a relationship with equipment suppliers that is unique within the solar industry today.

Add to this running Series 4 lines typically at 95-99% utilization rates and moving CdTe module efficiencies to unchartered waters, and you begin to see how First Solar from a cell production standpoint is not simply differentiated in technology (thin-film, not c-Si) but from a manufacturing business perspective.

2018 marks a return to thin-film being a feature of the top-10 cell production rankings, and while Series 6 is still in a ramp-up phase and costs still need to be fully established, it is likely First Solar’s ranking will improve when the summary of cell production in 2019 is undertaken.

Going into its fourth year, the forthcoming PV CellTech 2019 conference (Penang, Malaysia, 12-13 March 2019) will again be the go-to event of the year to hear from the CTO’s of the top-10 cell producers, many of the new n-type companies seeking to disrupt mainstream cell technology in the next 12-18 months, and all the leading equipment and materials suppliers that are key to cost-reduction and efficiency-gains.

PV CellTech has now become the PV Technology Roadmap of the industry, and for the exclusive attendees, offers market insights and networking that drives much of the leading company strategies going forward. The event was sold-out during 2018, so book a place early to ensure participation.