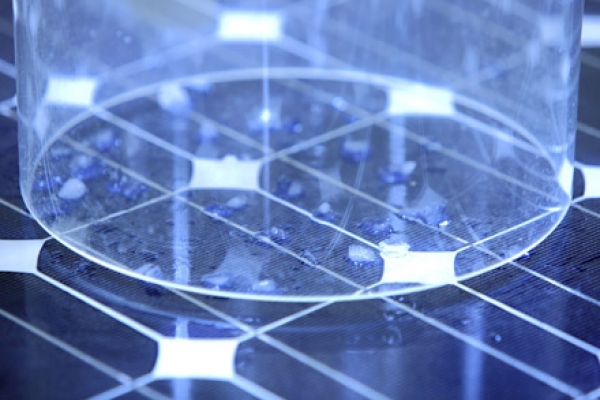 While India’s solar market is still heavily weighted on the lowest possible costs, the price difference between monocrystalline and polycrystalline PV module technologies is beginning to fade. PV Tech caught up with major module suppliers at the REI Expo in Greater Noida, India, to discuss the future of Mono in this heavyweight global market.

Speaking to PV Tech, Anmol Singh Jaggi, co-founder of India-based solar advisory, EPC and O&M firm Gensol Group, which has provided services on multiple gigawatts of projects across India, estimated that technology choices for Indian projects in 2017 came out at 95% Poly and 5% Mono. But in 2018 it has been closer to 85% Poly and 15% Mono. Furthermore, he predicts 2019 to draw 65-70% Poly and as much as 30-35% Mono.

Singh Jaggi said: “The reasons are very clear. Today the non-safeguard price is 25 cents on the module. Earlier the Mono guys were charging 3-4 cents as premium. Now the premium has come down to 1 cent – even as good as no difference on the Mono versus Poly price, but Mono helps me a lot on my balance of system. The same module, whether it’s 325Wp or 345Wp, reduces my Balance of System (BOS) by 8%, which is extremely interesting to save costs. So Mono is the future because we don’t see any difference in the Mono versus Poly pricing now.”

He went on to explain how higher wattage helps EPCs reduce cable, rail, and structure costs to name just a few pieces of equipment, as well the reduction on cost of installation and time. The market is changing very fast and Mono is starting to make an impact on India, particularly in the rooftop space, he added.

Describing an Indian market that is in difficulties with safeguard duties, rising interest rates, a depreciating rupee against the dollar and a Goods and Service Tax (GST) of 18% rather than 5%, Singh Jaggi added: “When we are in the market of only bread and butter (no cheese or jam), every price counts.”

What the top three suppliers forecast

According to consultancy firm Bridge to India’s ‘India RE Map’ the top three PV  module suppliers to India in FY 2017/18 were China-based manufacturers Canadian Solar, JA Solar and Trina Solar.

Victor Liang, sales manager, JA Solar, said that polysilicon modules still dominate the Indian market with the firm’s sales last year and the first half of 2018, coming out at 99.9% in Poly technology. This is because customers still feel that the cost to efficiency ratio remains best with Poly, said Liang. However, he said new specifications are becoming more popular and while JA Solar has been actively promoting Mono-PERC modules globally, which it sees as the future of the mass market, it is also now promoting this technology in India.

“[Indian customers] were thinking Mono-PERC is too expensive to make the financial model work, but now the price gap is very very small,” he added.

Liang also noted that Mono-PERC has been proven already in markets like China, America and Asia Pacific. As a result, he believes that Mono-PERC will start to take some shares of the Indian market from Poly starting from this year onwards.

“In past years manufacturers have been shipping the low-end products and offering the lowest price, and today the price pressure is even harder. The PPA price is coming down and together with the safeguard duty which adds pressure on capex and cash flow,” he said.

However, Zhuang is beginning to see PV players focus on higher performance technology with increasing costs, with some players as early as 2016 looking at LCOE when procuring modules. Indeed, he forecasted that if not this year, then by 2020 at the latest, project developers will have to look towards new technology to save costs rather than focusing on low-end products for the lowest price. He cited bifacial module technology as a key mover in this regard.

Zhuang also claimed that once grid parity is reached at a mass scale, this will iron out some of the major annual market fluctuations caused by subsidy support curtailment, and then cost structures will be stabilised, the market will become more predictable and customers will be able to plan in more detail and therefore focus on better technology.

Nonetheless, Zhuang also claimed that there is much chat about the Mono versus Poly debate, with bold statements such as ‘Mono will replace Poly’, for example. However, as only a few players represent the majority of the Mono wafer capacity, that market is open to speculative pricing in a way that the open Poly market is not, he claimed. This can keep the Mono prices high at times when the Poly price dives and therefore project economics will keep the Poly products alive. Ultimately the prices of Mono and Poly wafers will be the key differentiators.

“The Mono market share will grow, but poly will still be there,” he said.

He also suggested that Mono players are on the offensive and may become more aggressive in their pricing, but this cannot be sustained for too long.

“In the end people have to make money, at a certain point they have to stop and Indian price is already very low – you can’t go any lower – so in today’s industry we all know that silicon is at the RMB80 per kg [US$11.68] and in wafer and cell and module no-one is making money. The entire supply chain is losing money and today the only driver for cost reduction is RMB currency depreciation.”

The only other factor that could change costs for next year, said Zhuang, is technology innovation, but technology does not change prices dramatically in the space of one year.

Remarking on the 2.44 rupee tariff discovery in Gujarat’s 500MW solar auction earlier this week, Zhuang said: “I think it can be managed at that price and the project can be built.”

This was assuming a market price of 23 to 24 cents per Watt for Poly modules from tier 2 suppliers (excluding shipping), he said.

However, Zhuang again highlighted bifacial technology as an unavoidable technology of the future: “Moving forward at a certain point they have to think about using bifacial technology. The investors, the banks would have to accept that. It would dramatically increase the yield of the project by around 10%. Indian conditions are suitable for that – flat and barren land with hard ground.”

Gaurav Mather, sales director, India, Trina Solar, said that Poly is dominating the market, however, all players will start having to look at Mono-PERC as the price starts to be comparable with Poly.

“We estimate that that second half of 2019, the gap between the Mono and the Mono-PERC and the Poly will be very minimal,” he said.

However, Mather expects Poly to continue as mainstream in India because of the focus on low tariffs and aggressive pricing. Mono-PERC will however appeal to certain developers looking at LCOE.

In terms of N-Type module technology, Mather believes it will take a long-time to take hold in India because of the pricing, however, he – like others – sees bifacial as a major future prospect, particularly in the floating PV sector, which is beginning to flourish in India.

In a testament to the rise of Mono technology in the country, Bridge to India’s Solar Compass for Q2 2018 tabbed Mono specialist Longi, followed by thin-film specialist First Solar and Chinese firm Yingli as the top three module suppliers for projects commissioned in the quarter.

Jason Chow, marketing manager at Mono specialist LONGi Solar said the company had a very successful 2018 in India, but it has historically been hard in this region to promote its PERC technology due to the higher costs in such a price-sensitive market. The company has been striving to change customers’ attitudes to concentrate on performance over cost.

Pranav Mehta, chairman, National Solar Energy Federation of India (NSEFI), said: “I'm happy that Mono is picking up globally and making some inroads in India. LONGi and Trina, now GCL will also have to follow through. Everybody has to now [look at] Mono PERC. That percentage of Poly is going down – 99% to 90% let us say, but there’s still miles to go.”