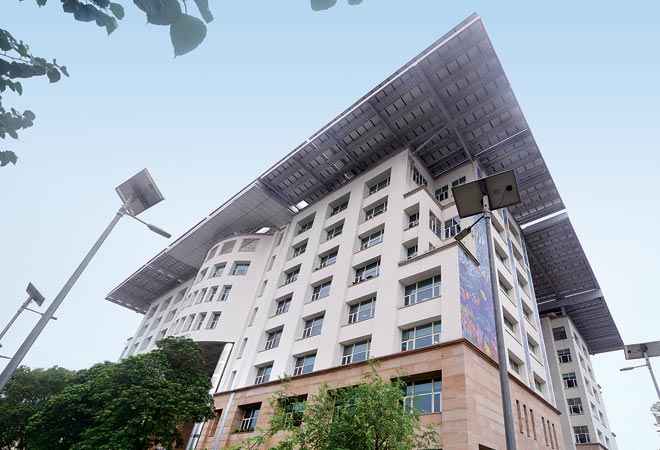 Indian buildings are silent energy guzzlers. They account for 35% of India’s overall power consumption and generate a significant amount of greenhouse gases. Because of ever-increasing population and urbanisation, the construction (and energy consumption) of buildings has seen a rampant rise. The next decade is expected to witness massive volumes of building construction, which will further escalate energy consumption.

While there is a strong policy-push towards the adoption of renewable energy technologies such as rooftop solar photovoltaics (RTPV), the potential for making zero energy buildings has not been explored extensively – even though experiments across the world (and India) have shown the possibility.

Net Zero Energy Buildings (NZEBs) – 100% energy-efficient, sustainable buildings – can be a game changer, not only for India’s building sector, but also for the energy sector. NZEBs have lower energy demand than that of conventional buildings and produce at least as much energy as they consume in a year, through onsite renewable energy technologies. NZEBs are commonly grid-connected to save battery costs. This allows them to draw electricity at night and during cloudy days, and return an equivalent amount of electricity to the local grid on sunny days. Thus, it nullifies the net carbon emissions from buildings.

In the Indian context, proactive government initiatives encourage decentralised solar photovoltaic (PV) technologies, such as RTPV and (to an extent) integrated solar photovoltaics (BIPVs). However, this has not evolved into an integrated policy that looks at achieving zero energy consumption from buildings.

Such green buildings can significantly support India’s Nationally Determined Contribution target to reduce the emissions intensity of GDP by 33–35% (from the 2005 levels) by 2030. Beyond this, NZEBs can emerge as a beacon for scaling up decentralised solar photovoltaic generation and support the efforts of the Ministry of New and Renewable Energy (MNRE) as well. NZEBs can help mitigate the consequences of climate change by bringing a revolution to both the construction and especially the energy sector.

Current status: slow progress is better than no progress

The Indira Paryavaran Bhavan in New Delhi (constructed in 2014) is India’s first NZEB, built with integrated energy-conservation methodologies and a super-efficient solar PV system of 930kW capacity. This system generates almost 1,491,000 units annually, while the overall energy demand of the building is approximately 1,421,000 units per year. However, in spite of their promising potential to tap solar power and address environmental challenges, only seven Indian states (including Delhi) have constructed NZEBs till now (see Figure 1). 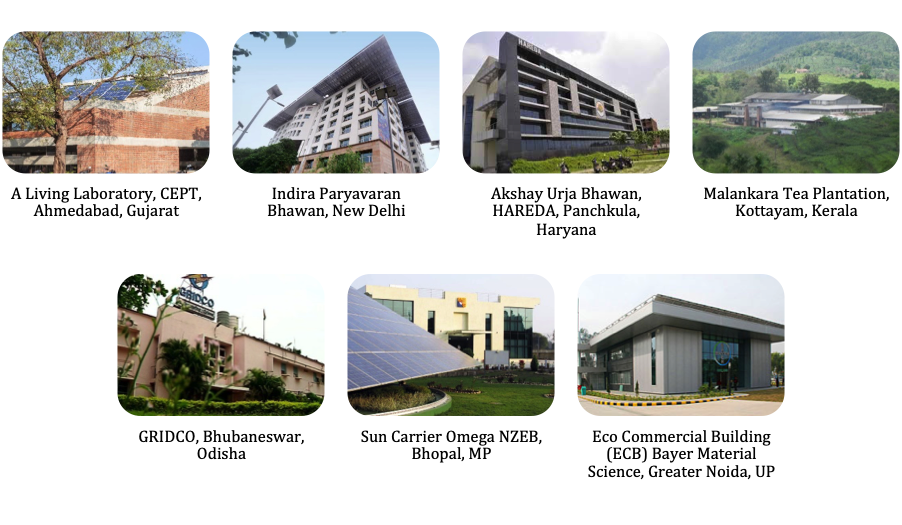 Globally, however, there is significant policy push for NZEBs. For instance, the European Union has mandated that all new public buildings (post December 2018) should be NZEBs, and all upcoming buildings in the member states must be NZEBs by December 2020. California, as part of its Long-Term Energy Efficiency Strategic Plan, has mandated that all new domestic buildings be zero energy by 2020, and all new commercial buildings be zero energy by 2030.

Considering India’s housing and energy needs, especially its commitments to meet the Sustainable Development Goals, it is time for us to develop a comprehensive policy that looks at reducing the energy consumption of buildings.

However, the question remains: How can we accelerate the growth of NZEBs and implement it on a large scale in Indian cities? Constructing NZEBs requires a two-pronged approach: incorporating energy-efficient techniques to diminish the energy demand and tapping renewable sources of energy, such as solar, to meet the residual demand (see Figure 2). For older buildings, we can consider retrofitting energy-efficient technologies and feasible decentralised solar measures to partially meet the energy demand. However, by incorporating these elements when designing buildings, the energy demand can be significantly reduced and the reduced demand can be completely met by solar technologies. 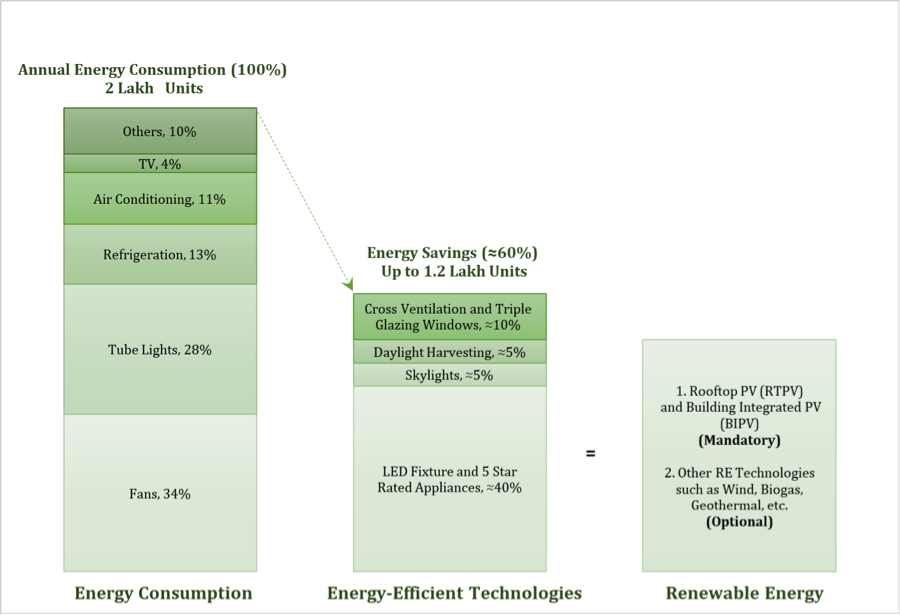 Typically, in both residential and commercial buildings, the maximum electricity consumption is from lighting and cooling appliances. Thus, to reduce the energy consumption of a building, factors such as building orientation, positioning of windows, and construction of horizontal and vertical shading elements should be taken into consideration to maximise daylight harvesting. By adopting natural ventilation, cross ventilation, double-pane or triple-pane windows, and fixing insulation materials on walls and roofs, solar heat intake can also be reduced.

Furthermore, LED (Light-Emitting Diode) lights with automatic lighting controls, five-star rated electrical appliances, energy-efficient ceiling fans and air-conditioning systems should be encouraged for energy conservation. By including all these features, the energy demand can be reduced by up to 60%, and the residual demand can be fulfilled by onsite solar PV systems.

Fixing solar PV panels on rooftops has become a common practice to harness solar power, typically after the construction of a building. However, beyond rooftops, solar modules can also be mounted on building envelopes.  BIPV is an emerging alternative technology that incorporates lightweight, robust and weather-resistant PV modules on building facades, curtain walls, skylights, and windows during the initial designing and construction phases. BIPV is gaining traction in the country and has the potential to become an integral part of NZEBs.

From a design perspective, the optimal inclination angle for a solar module is close to location’s latitude (with ±5ᵒ deviation) and the orientation is due south in most cases for RTPV systems. A typical 1kW RTPV system can generate 1,500–1,600 units on an average every year. But, for BIPV implementation, solar modules can be mounted vertically, as well as with a tilt, on the facades and curtain walls depending on the facade’s material and design. Initial results of the study and calculations conducted by the Center for Study of Science, Technology and Policy (CSTEP) reveal that a south-facing BIPV system, vertically aligned, generates 50% less power than its rated capacity in any other position. A tilted system, on the other hand, performs as per expectations. However, it should be kept in mind that there will be an additional cost of constructing elevated structures in a tilted BIPV system. The levelised cost of electricity is quite similar for both systems and close to the retail tariff rates for the domestic consumer category, which makes them feasible on a south-facing facade.

At the moment, the initial investment for BIPV is high (although its long-term benefits outweigh the initial costs). However, the overall cost of BIPV can reduce, compared to that of conventional building material and construction costs, with adequate tax breaks and incentives.

At present, BIPV systems are not 100% feasible for the existing Indian building infrastructure due to certain challenges like heavy congestion, poor infrastructure and inadequate urban town planning. These might hinder developing a specific regulatory framework and policy, and the lack of government support for BIPV systems in India. Consequently, it is highly recommended that upcoming zero energy buildings and communities should be planned to harness the maximum solar potential using building envelopes. Using solar technologies is prudent because of their efficient performance, lower cost, durability, aesthetic appeal and longer lifespan.

Is ignorance of NZEB acting as a bottleneck?

The NZEB concept has not been implemented on a large scale in India due to the absence of a specific NZEB policy, well-defined government programmes, awareness, pilot projects and lack of success/failure stories. Additionally, the country lacks qualified design experts and architects with adequate knowledge to deploy NZEBs. Thus, training and development programmes for building simulation methods need to be encouraged as part of the educational curriculum. There is also a need for advanced and customised computational tools to design and simulate an entire NZEB, as per the choice of users. Such simulation tools can be helpful for evaluating and comparing a building’s performance before and after incorporating NZEB elements.

The cost factor is one of the biggest bottlenecks in the adoption of NZEBs; the overall cost of NZEBs is nearly 30% higher than that of conventional buildings. Nonetheless, NZEBs are worth it because of their premium value, and onsite RTPV and BIPV systems offer decent paybacks over time. Designing of attractive feed-in-tariff rates, for selling the surplus electricity generated to the local grid, can be another benefit from the cost perspective. Moreover, financial assistance or capital subsidy from the government can also reduce the overall NZEB project cost.

How to transform the energy and building landscape?

In view of the aforementioned barriers and the tremendous potential of NZEBs, there is an urgent need for a common platform, representing different stakeholders having adequate knowledge and expertise. The platform could include the Bureau of Energy Efficiency, Ministry of Power, MNRE, Ministry of Urban Development, town planning departments, building planners/consultants, construction material manufacturers, research and academic organisations, and municipal corporations. We suggest that an academic-industrial-government consortium be created to develop and promote a well-defined NZEB roadmap for large-scale development.

The goal of this consortium should be to set a small target for adopting NZEBs in India, by 2030, for trial. This will allow the consortium and other experts to evaluate the actual performance of NZEBs, and resolve problems that may arise. Thus, the consortium will be able to develop a specific design strategy to integrate energy-efficient and renewable technologies, especially BIPV and RTPV. Eventually, the consortium should also be responsible for obtaining financial support from different national and international funding agencies.

Similar consortia should be recognised at the central level as well as the state level. The central consortium will have to shelter all state-level consortia, and provide guidance and support.  These collaborations will contribute significantly towards achieving the existing and future solar targets, set by MNRE. In this regard, NZEB pilot projects, for residential and commercial segments, should be demonstrated and monitored by all state-level consortia. After experimentation in the states, pilot NZEBs should be launched in all cities across the nation.

Meanwhile, long-term electricity savings, cost savings, and environmental benefits of NZEBs should be acknowledged and shared with the public for bringing about increased awareness through channels such as traditional and social media. A large number of engineers and technicians should be trained to design and develop cost-effective NZEBs. The State Electricity Regulatory Commission (SERC) of each state can formulate attractive feed-in-tariff rates/incentives for selling the surplus power to the local utility grid. In the meantime, the above-mentioned departments associated with the building sector should also plan and develop net zero energy cities by making NZEBs feasible and scalable, with similar designs for each and every building. It can be argued that conducting such pilot projects in the Indian context will help decarbonise the building sector and ensure a complete makeover of the sector in the long run. Such efforts have the potential to not only meet the solar targets but also cross the targets in a sustainable and safe manner. They will also pave the way for creating a regulatory framework for NZEBs. We can thus achieve the dream of completely offsetting the adverse climatic impact of buildings just by deploying sustainable techniques and by harnessing the Sun, someday.