Aiko Solar aims to tap into European R&D, one step at a time

One of the largest merchant solar cell producers in the world, Aiko Solar has now established a base in Europe, with the intention of accessing the best of the R&D activities the region can provide.

It’s an attention-grabbing development for Europe’s solar industry, and one that poses a number of questions. The task of establishing that base, and indeed answering those questions, has been given to Dr. Christian Peter, managing director of Solarlab Aiko Europe, officially a registered company in Germany since the beginning of October 2020.

PV Tech spoke to Dr. Peter to determine the direction of Solarlab Aiko Europe, and what it may mean for the continent’s solar supply chain.

PV Tech: What is Solarlab Aiko Europe going to be?

Dr. Peter: To answer that, allow me to go back in history a little bit. Having been in the solar industry since 1995, I was with RENA from 2008 and became acquainted with Aiko Solar as a key customer, almost from the very beginning when the company was founded. Since then, Aiko has become the biggest solar cell producer, almost exclusively using European manufacturing equipment.

During discussions early this year with the Aiko team, the question came up as to what all the great European PV R&D institutes were developing, given the current dearth of mass production in Europe. From these discussions, we came up with the idea of combining the best of both worlds, European R&D and Chinese mass-production know how.

After carrying out a feasibility study on how this could be achieved, we agreed on the idea of creating something along the lines of a ‘think tank’, where the different technological approaches of all the institutes and manufacturers in Europe could be evaluated.

Having worked for six years at the Fraunhofer ISE in Freiburg, I talked with some of the people there and they warned me to be careful with perceived technology shifts to China, since that can become highly political.

Therefore, if a Chinese organisation were behind this concept of a think tank/testing lab in Europe, there would need to be an element of job creation attached, particularly involving the mass production of high-end cells.

After sharing the discussions I had had in Europe with Aiko headquarters, they asked me whether I could set up such an arrangement for them in Germany. For me personally it seemed to be a great chance to bring back production to Europe, which I had discussed with many stakeholders in the German PV community, and finally we took the decision to set up in Freiburg.

There were numerous reasons for the choice of location. The Fraunhofer ISE is located there, the university has an excellent reputation, with ‘Master of Science Solar Energy Engineering’ courses, a number of big suppliers to the PV manufacturing industry like Centrotherm and RENA are located nearby and Freiburg is also situated centrally to several of the other European PV R&D institutes.

In October, Solarlab Aiko Europe GmbH became an officially registered company in Germany and we are now in the process of establishing a test lab facility. This is not intended to be a pilot line, simply an evaluation, testing and qualification type operation that will ideally give us the answers as to which technologies we should look at as a next step.

Since setting up, we have also been in contact with some of the key institutes across Europe, which are of course already very well known to us, as we explore different levels of possible cooperation and look to recruit people to work with us.

Is this testing facility designed to filter down R&D cell developments in Europe back to Aiko Solar?

The challenge is that, typically, each institute has a specialisation in a particular field,  on which their experts have written numerous papers and presented their findings and developments at many conferences. This potentially leads to a scenario where you talk to five different experts at five different institutes and maybe have three different answers to the same question.

The idea is that Solarlab Aiko Europe, since we don’t have any agenda or preference toward a specific technology, could be completely neutral in identifying the best technological directions to follow.  As you know, Aiko Solar is currently focused on just bifacial PERC in high-volume production and we just want to figure out what we believe could be the best next step.

Included here, of course, is the potential to help improve the evolutionary PERC steps that could push the technology a little further, as every 0.1% improvement is obviously important. This could be, for example, where an institute or equipment supplier had developed some cell processing improvements and we would just try and measure those improvements before advising Aiko.

It has been clear for many years that PV R&D in Europe is struggling since manufacturing has declined due to competition from China. There are now simply no manufacturers with real scale to compete and invest in R&D collaboration at levels that previously supported a multitude of institutes. Is this something you’re trying to help avoid?

Yes, I have seen and experienced the rise and fall first-hand, not least losing some money with my shares in Q CELLS… But let’s just admit that things are not really running without China. Clearly, this has resulted in a sort of dead-end for European R&D engineers, who have been excellent but have nowhere to go, so to speak.

What we at Aiko can offer them is an open-minded approach where ideas could become reality and end as a tangible product. On the other hand, to be honest, part of the role of Solarlab is to provide a possible pathway for Aiko Solar to establish mass production in Europe. We would not be looking for European funding for R&D because everything is already there in the field.

Having mass production at a later stage is therefore possible as Aiko is not a module producer but solely a cell producer, with existing customers in Europe. Recent history has also taught us that having a global manufacturing footprint offsets some of the political sensitivities and uncertainties.

Another area of interest for Solarlab is the potential to support R&D at key European equipment suppliers, since they have a range of R&D activities that would support Aiko in mass production. We could be interested in sharing the risk of rolling-out new technologies, for example. This could improve and significantly shorten the time to market, something that Chinese companies thrive on.

Who really benefits from Solarlab?

I can’t easily answer this good question. Much discussion is ongoing on many fronts as to what could be possible on so many levels. This relates to areas like perovskites, long to short-term R&D projects and whether IP licencing models can be applied.

Does this also mean that R&D in China is not done as well as in Europe?

No, definitely not. I think it’s been a company thing, in respect to Aiko, which has historically been a major purchaser of European equipment and related technologies, much more so than most China-based companies, as they have seen this as a competitive advantage, even when, as we know, the machines have higher upfront costs. Aiko was an early adopter of p-type mono PERC and is now at the stage of wanting to further optimize this technology for the bulk of its customers, so whoever can help them achieve this will also benefit.

Aiko sees this as an opportunity in the sense of wanting, as a cell producer, to carry out its business as well as possible and the company therefore wants to strengthen business ties with a view to cooperating and collaborating more closely. Let’s not forget that we could be entering a new renaissance in demand for solar in Europe due to the Green plans and Aiko would want to directly support that renewed European growth. Indeed, the cost gap with China in production terms is narrowing, when taking into account the increasingly high levels of automation, and more costs are now related to materials than labour.

Obviously, Solarlab Aiko Europe is at an early stage of development and is in the process of establishing itself and honing its approaches to recruitment of key staff, collaborating with R&D institutes and equipment suppliers. From Aiko Solar’s perspective it’s a clear business decision to tap into European expertise and to the benefit of those it partners with, especially given its history of doing that with equipment suppliers.

But it is launching this new initiative from a position of strength. Recently, Aiko reported revenue growth of nearly 50% higher in the first nine months of 2020 with RMB6.25 billion (US$935.28 million) exceeding the 2019 full-year revenue figure of US$860.25 million. PV Tech had previously reported that AikoSolar planned to reach 36GW of high-efficiency solar cell capacity by early 2021.

The company said in its H1 2020 financial results that it had reached 15GW of nameplate capacity in the reporting period, up from 9.2GW at the end of 2019. The company’s R&D spending in 2019 reached over US$31 million, ranked 14th highest amongst 25 public listed PV manufacturers, according to PV Tech’s analysis. 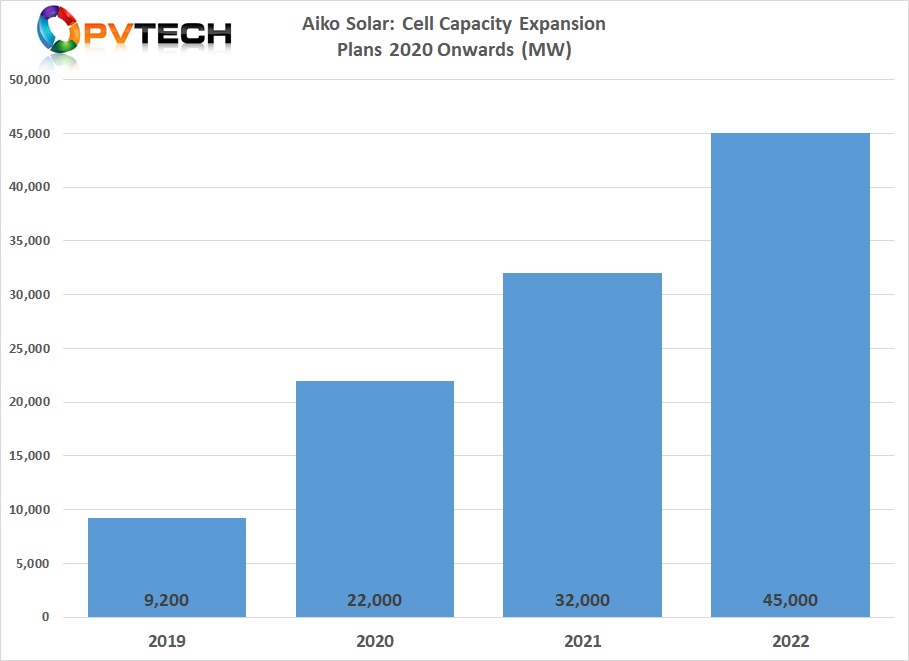