Borrowing the sun when it should be free 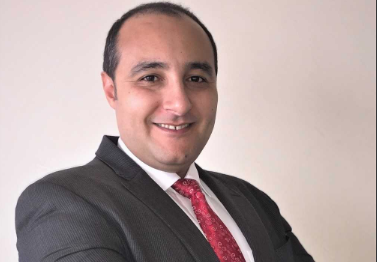 Let’s agree that the limited reserves of fossil fuel and its growing impact leading to environmental degradation highlights a very costly, dangerous, and unsatisfactory future for our world. It is easy to understand that as the fossil fuel reserves near depletion, the cost of fossil fuels will rise, depriving even more people of energy (currently more than 1 billion people live without electricity in the world). On the other hand, solar energy offers an opportunity to get out of the tightening binds of depleting fossil fuel reserve, while offering power to all. So, there are no doubts that we are in the middle of a transition period, but how can developing countries benefit from this transition?

We must highlight that, energy and economy are interconnected components. Thus, growth in solar within a country (which promises to solve energy scarcity) signifies new overall development and construction of a progressive economy. Let us see how: 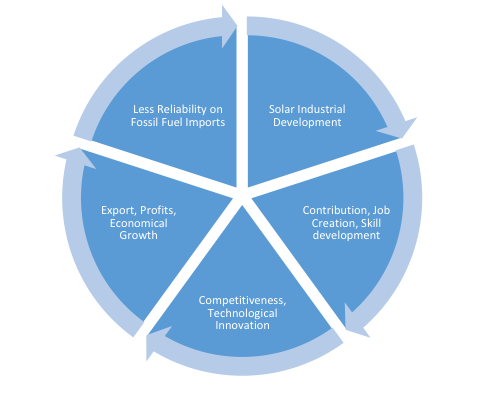 As the above stated points reveal, it is a cycle; one empowering another, leading to the development of a country’s economy and diversifying its sources of energy and income.

Global acceptance is at hand

Understanding the potential of green energy transition through solar, developing countries like Brazil, Philippines, Egypt, Mexico, Turkey, Chile, Africa, and India are investing in solar. As a result, renewable energy investment (US$286 billion) surpassed investment in coal and gas (US$130 billion) in 2015-16 and reached to US$333 billion in 2017-18. Solar investment globally amounted to US$160.8 billion in 2017, up 18% on the previous year despite these cost reductions. Additionally, solar PV project auctions in emerging markets rose by 4.5 times within 2013-17. So, it is apparent that global demand and acceptance for renewable energy (especially solar) is on the rise.

We shouldn’t buy the sun from others!

We have already explained how a green energy transition through solar can not only offer power to all but support and lead socio-economic growth of a country. However, that totally depends on building industry and manufacturing capacities. Unfortunately, countries, especially developing countries are losing their chance of building a better future through enhancing manufacturing capacities, as countries with vast manufacturing scale are flooding their market with solar components priced at much lower than market cost. Low priced solar modules and components may appear as a great deal for developing countries, but it is actually robbing them of the opportunity to build manufacturing capacity and speed up the overall growth of their country.

Countries like China becoming a world supplier of solar components will centralize the solar industry in foreign countries, further strengthening their capability to control the industry and put the dream of becoming a solar power on unstable grounds. Centralising the solar industry to a handful of countries will also introduce a decline in technological improvement, since those countries will most certainly invest most of their time and money on expanding their supply chain (to meet growing global demand) rather in R&D. There shouldn’t be limitations on global manufacturing or monopoly on the sun.

The US has taken measures to protect its domestic manufacturing industry. The US Department of Commerce imposed up to 165.04% on PV solar imports from China and Taiwan in 2014 and in 2018 the country imposed 30% tariff on solar imports.

Although, developing countries like India have shown intent towards rapid solarisation, in most cases this growth has been depended on solar imports (especially in case of India). India spent $3.1 billion in solar equipment imports, which is about 35 times its solar equipment export. In FY 17-18 the expenditure stood at $3.8 billion. This massive import figure helps only achieving short-term goals of the country without having a sharp precognition on the global future energy control map. Growing expenditure in import blocks the country from investing in domestic manufacturing, and gives control of Indian solar future to foreign suppliers (Chinese suppliers already hold ~80% share in solar market in India).

Here, it is important to underline that spending billions on imports doesn’t really create jobs but only increases forex outflow, which could have been spent towards industrial growth.

Dominant solar countries like China have aggressively expanded their domestic manufacturing capacity, which has helped them to control the price of the modules, while creating jobs, and claiming the export market. Developing countries like India should follow these tried and tested business tactics and focus on domestic solar manufacturing to establish its position in the global export market. In case of India, we should say “re-establish” as the country used to have a strong export base, catering to the rising demand in Asian and European markets during 2000-2010.

Initiatives like International Solar Alliance (ISA) offer financial support, technology exchange options, and a collaborative platform, which developing countries like India can use to build manufacturing scale within and sore high. However, Governments should look towards solving the internal issues as well. For example, Indian domestic solar manufacturing is going through issues like added 18% GST towards solar project development, 25% safeguard duty imposition on SEZ based solar manufacturers, increase of tender cancellation etc.

Domestic solar manufacturing has to be prioritized and these issues have to be solved to support the growing solar industry within India. Solar should be considered as the best possible opportunity a country has, to grow out of the fossil fuel binds and become energy self-reliant, creating jobs, trade relations, and economic stability. And since building manufacturing scale is the only way to achieve that goal, we all should work towards supporting this target and position India on the supply of the global future energy map.

This week, PV Tech gathered views from various players – both foreign and domestic – about what steps need to be taken to support local manufacturing in India, while at the REI Expo 2018 exhibition in Greater Noida, India.