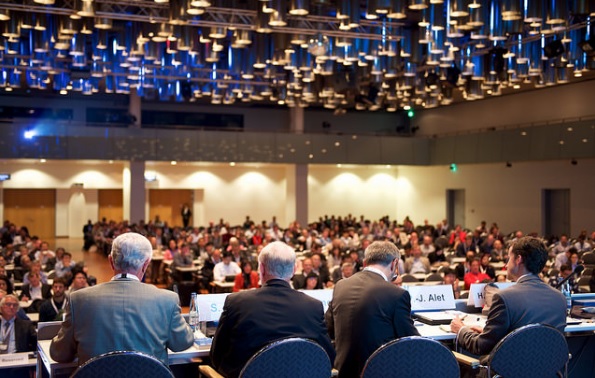 The 33rd European Photovoltaic Solar Energy Conference and Exhibition (EU PVSEC) has turned away from co-locating with Intersolar Europe in June, 2016 and has returned to a September 2017 slot and be held in Amsterdam.

Having suffered from declining attendance, co-locating with Intersolar Europe was seen as a way to stem the decline, which did not work.

Instead, EU PVSEC will revert to its longstanding policy of moving around Europe and has picked Amsterdam from 25 to 29 September 2017 and hopes to restore the small exhibition lost when co-located with Intersolar Europe.

“The Netherlands is very pleased to host the EU PVSEC 2017,” says Wim Sinke, Program Development Manager at the Energy Research Centre of the Netherlands (ECN). “Solar energy is considered a key technology for a sustainable energy future, also in our small and windy country. This conviction is clearly translated into our innovation and deployment policies – PV is an important topic in our ambitious innovation program, and large-scale PV deployment is stimulated by several financial incentives for small and large systems, and the PV market has grown accordingly.”

Luckily, EU PVSEC will not clash with Solar Power International (SPI), which will be held again in Las Vagas in 2017 on September 10 through September 13.

26 September 2022
The WCPEC is the world’s biggest platform for PV research and development, offering a unique possibility of international exchange by combining the three largest and most prominent international PV conferences: the European PV Solar Energy Conference (EU PVSEC), the Photovoltaic Specialists Conference (IEEE PVSC) and the International PV Science and Engineering Conference (PVSEC). In 2022, Europe has the honour to host the 8th World Conference on Photovoltaic Energy Conversion, interchanging the prestigious EU PVSEC for this year, that is being held annually for more than 40 years. After being in place for more than a quarter of a century, the WCPEC, being held every four years, is firmly established among the global PV community as THE event for the greatest minds and experts in various PV sectors to meet and discuss, to exchange and network! The conference programme is coordinated by the European Commission Joint Research Centre.
c-si manufacturing, eu pvsec, pv modules, solar cell