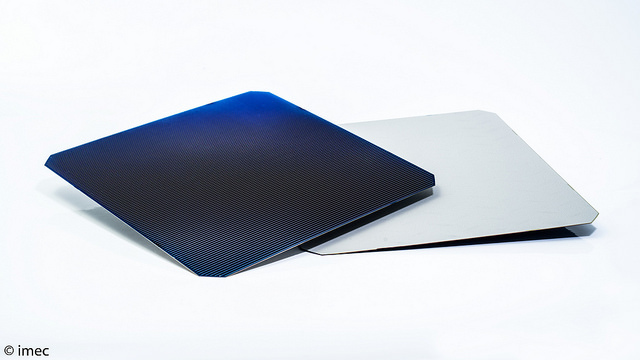 During last week’s EU PVSEC conference that was held in Brussels, Belgium, imec announced that its latest generation of large-area monofacial screen-printed rear-emitter nPERT cells achieved a conversion efficiency of 23.03%, which had been certified by Fraunhofer ISE CalLab.

“Until now, nPERT solar technology has not yet found the traction it deserves in the industry,” noted Loic Tous, senior researcher at imec. “With these ever-improving results, which we achieved by applying knowledge gained from our bifacial nPERT project, we are now demonstrating the potential of nPERT technology. The advantages in stability and efficiency potential over p-type PERC cells, while using the same equipment with the addition of a Boron diffusion, make this a very promising technology for future manufacturing lines.”

According to imec, its nPERT technology is projected to reach 23.5% efficiency by the end of this year, with a clear technology roadmap to eventually surpass 24%.

N-type PERT technology could become a cost-effective contender to P-type PERC, which is being ramped extensively as the next-gen mainstream technology ahead of an expected shift to heterojunction technologies (HJT) in the next five years.

However, nPERT technology could compete in the 24%-plus efficiency space that HJT technology is expected to become mainstream as it retains key printing and other equipment from the PERC migration.

According to imec, nPERT technology has a number of inherent advantages over P-type PERC cell technology, notably the absence of light induced degradation (LID) and are less sensitive to metal impurities that limit cell efficiencies.

Imec has fabricated the M2-sized cells (area: 244.3 cm²) on its pilot line with industry-compatible tools and recipes in a process that is an upgrade of the pPERC fabrication process. This includes using a similar layout of an n+ region (Front Surface Field) on the illuminated side and a p+ region (as rear emitter) on the opposite side and adding a cost-effective boron diffusion.

Key to nPERT technology adoption will also be its cost effectiveness against HJT technologies capable of 24%-plus conversion efficiencies.