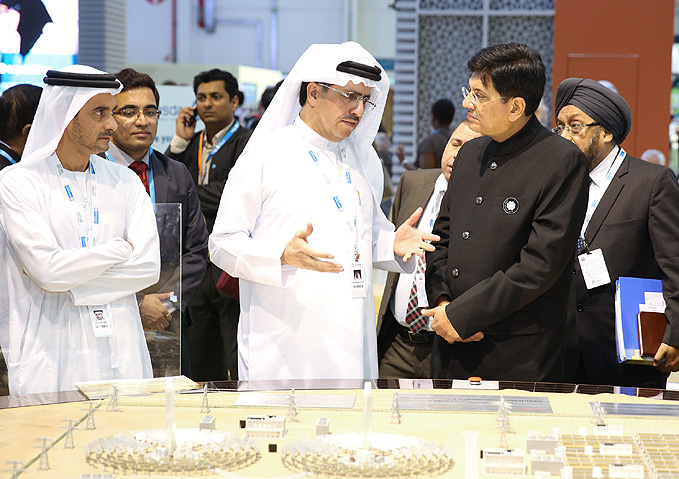 India and the UAE should collaborate more closely on renewables and other clean energy technologies, Indian energy minister Piyush Goyal has said.

Goyal, whose official title is Minister of State for Power, Coal, New and Renewable Energy and Mines, met with the head of DEWA (Dubai Electricity and Water Authority), Saeed Mohammed Al Tayer at the World Future Energy Summit 2017 in Abu Dhabi.

After extensive talks and discussion on DEWA and the UAE’s drives forward in sustainability and cleantech, Goyal commended these efforts, before urging for both countries to collaborate more closely in these areas and to build on existing strategic relationships.

Goyal’s delegation heard from Al Tayer about DEWA’s various projects and progress towards the Dubai Clean Energy Strategy 2050, which aims to gradually increase the proportion of clean energy in the emirate’s energy mix to 75% by that year. Recent developments from DEWA include the signing of what is thought to be the world’s lowest priced solar PPA for an 800MW project in Dubai, which PV Tech reported in November last year.

Al Tayer’s talks included an update on progress from what could be the world’s largest solar park when completed – the Mohammed bin Rashid Al Maktoum Solar Park, based on an independent power producer (IPP) model and expected to have a generation capacity of 5,000MW by 2030 through investment of AED 50 billion (US$13.61 billion).

Also presented to Piyush Goyal and delegation was a summary of DEWA’s efforts to support UAE Vision 2021 – a drive to become one of the world’s most sustainable countries in just four years’ time through clean and renewable energy and water desalination projects.

Finally, Al Tayer showed off a model of DEWA’s forthcoming new headquarters, which is set to be the tallest and largest Net Zero Energy government building in the world when completed.