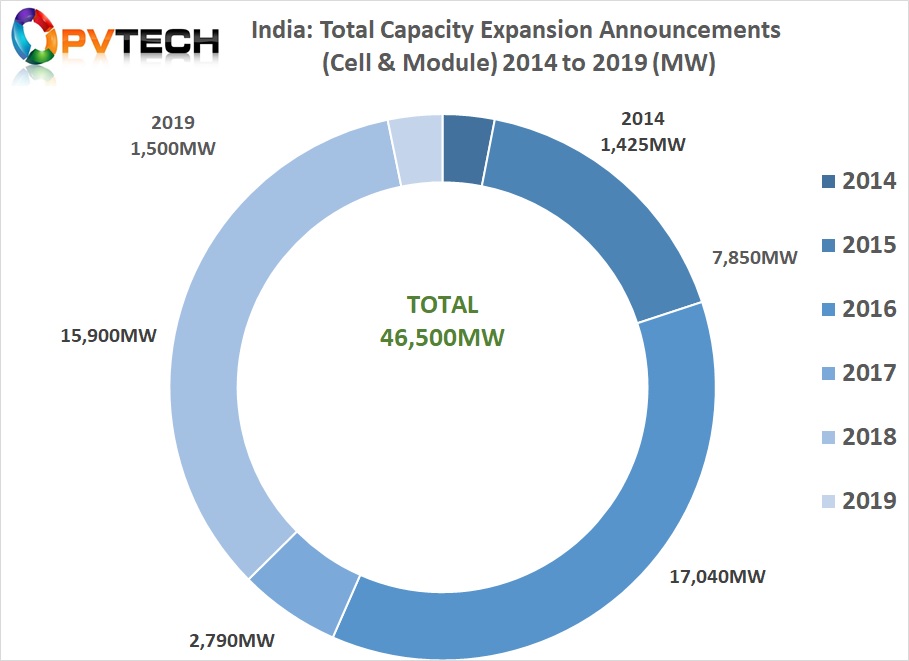 India has staged the launch of a new campaign to foster its domestic renewable manufacturing scene, in a bid to curb the dependency on imports the COVID-19 crisis had laid bare once more.

Letters sent by the Ministry of New and Renewable Energy (MNRE) in recent days asked state and port authorities to set aside land sites of 50 to 500 acres for new factories of renewable equipment, from solar cells and modules to silicon ingots and wafers, steel frames, inverters and batteries.

The MNRE’s engagement spree – complete with talks with Indian makers and foreign trade representatives – has yielded some fruit, the government claimed. The states of Madhya Pradesh and Odisha and port authorities in the southern city of Thoothukudi have already expressed their “keen interest”, the MNRE said.

India’s campaign emerges as the COVID-19 outbreak exposes its reliance on Chinese solar makers. The country, which prior to the crisis had already acted to set duties on PV imports, estimates 85% of solar cells and modules used nationwide come from abroad. The dependency is thought to have put 3GW of Indian solar projects at risk this year, with the pandemic crippling Chinese exports.

The calls for Asia to foster solar manufacturing beyond China have seen some momentum in recent weeks, with the continent’s development bank ADB coming on board the campaign.

In a blog post in early April, the institution said it could support actions to mitigate the solar supply chain “weaknesses” COVID-19 has exposed. Countries, the ADB said, must nurture their domestic ecosystem and explore the possibility to come together for subregional manufacturing hubs.

As the ADB itself noted, India’s on-paper potential is not insignificant. The bank quoted figures produced by Indian think tank TERI, estimating that a competitive 15GW full-value-chain ecosystem is feasible in the country by 2024.

As documented by PV Tech, however, India’s prior manufacturing efforts have yielded a mixed picture. On the one hand, based on Solar Media’s latest estimates (see graph above), the country has witnessed 46.5GW in solar cell and module capacity announcements by firms between 2014 and 2019.

On the other, however, attempts to embed a domestic upstream component into auctions – such as the 3GW solar manufacturing tender of 2018 – have seen repeated delays. The government tried again last year, via a 12GW domestic content solar scheme. Solar Media’s dedicated PV IndiaTech events have delved into the country’s odds of success.

In a post last March, Solar Media’s head of research Finlay Colville examined how India’s solar manufacturing ambitions fit in a global landscape of rapidly changing technology and supplier competition. Benchmarking and reality-checking is, Colville said at the time, an “essential” starting point for India.

India’s new solar manufacturing push comes as the country tries to also shelter renewable developers. The COVID-19 outbreak has emerged as clocks tick towards India’s 175GW-by-2022 green energy target, thought by some analysts to be set for failure even before the crisis.

In the space of a few weeks, MNRE has postponed the roll-out of an approved manufacturer list for solar projects, enshrined renewable generation as an “essential” activity and confirmed COVID-19 will be treated as a 'force majeure' event for the industry.

To the list, the government added yet another lifeline in recent days. In a letter dated 17 April 2020, MNRE said it is now granting a blanket 30-day commissioning deadline extension for all renewable projects, which comes to join the deferments it already made available in late March.

The onset of the pandemic has not, however, been able to stop the holding of major solar auction by utility NHPC. With winners including Softbank and Avaada Energy, the 2GW tender concluded with tariff lows of INR 2.55/kWh (US$0.033/kWh), Minister of State R. K. Singh recently announced on social media.

“During lockdown we kept our interaction with stakeholders alive through virtual platforms and also brought out new bids,” Singh said. “This tariff is the result of several measures which we have undertaken during the past few months to enhance confidence of investors and to promote ease of doing business. We stand committed to minimizing the risk to investors”.