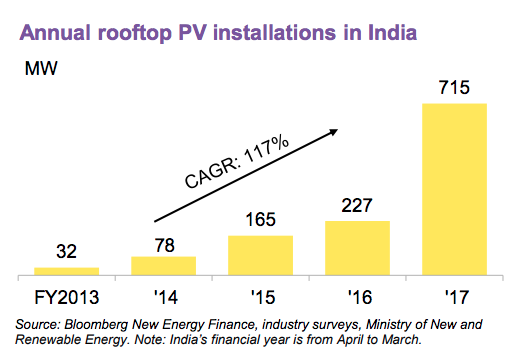 Rooftop PV is the fastest growing renewable energy sub-segment in India, with individual system sizes increasing and the C&I sector maturing, but a new report by Bloomberg New Energy Finance (BNEF) predicts that India will still only reach 9.5GW out of its 40GW target by 2022.

BNEF said that India will need to invest US$23 billion over the next five years to meet its rooftop target and the residential sector still needs some years before it booms.

The new report ‘Accelerating India’s Clean Energy Transition’ found that rooftop solar costs have halved in the last five years at the same time as retail electricity prices have increased by 22%. Moreover, C&I tariffs for solar have now reached grid parity in all major states in India, setting the town for more growth:

However, BNEF said that the attractiveness of residential rooftop solar is being held back by the high upfront costs, a lack of financing options, and cheaper grid electricity prices for those with low consumption. As a result, BNEF expects residential sector PV growth to pick up rapidly only after 2021.

While net metering is improving in the country, its rollout across various Indian states has been relatively slow and has often been cited as a major drawback by analysts.

BNEF noted that homeowners tend to use less power during the hours when their PV panels are producing, which impacts self-consumption. On the plus side, it said that solar projects also have great potential to power irrigation pumps and reduce the use of back-up diesel generators. As much as 60GW of small-scale PV could be deployed across various sectors consuming diesel.

BNEF estimates that India will reach 9.5GW of rooftop PV capacity by the fiscal year 2022, which would be seven times its current total of 1.3GW. It said that India’s targets are in fact “unachievable” even though the costs of rooftop PV in India are amongst the lowest in the world.

The report stated: “In order to achieve the government’s target, the pace of new installations needs to double every year between now and 2022.”

The market is till accelerating and more capacity was added in the last financial year than in the previous four years combined. The individual state rooftop targets for 2002 were laid out by BNEF in the following table: 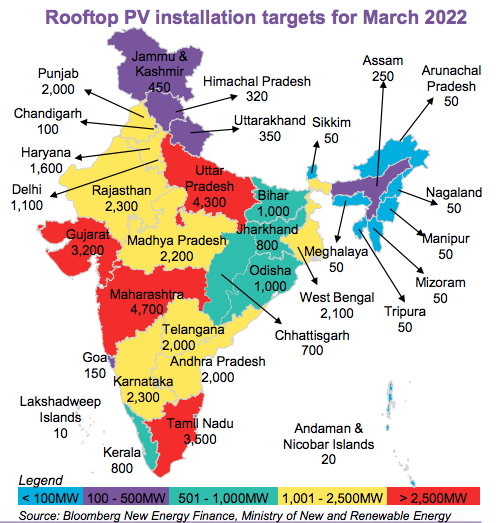 Some have cited the Distribution Companies (Discoms) as a barrier to rooftop solar, but Shantanu Jaiswal, head of India research at BNEF, said: “Rooftop solar in India will grow inevitably with or without the support of power distribution utilities.”

On the other hand, Ashish Sethia, head of Asia-Pacific research at BNEF, said that rooftop solar also presents an opportunity for Discoms to diversify and start their own businesses rather than lose customers to other rooftop developers.

The report showed a thriving C&I sector – stating: “C&I customers now set-up larger capacity rooftop PV assets and are also open to signing long-term power purchase agreements indicating growing confidence in this technology. The economics of PV work for C&I customers even without net metering. Net metering is a far more important enabler for residential consumers as they usually draw less power during the day when their PV panels are producing electricity.”

While India has seen a huge increase in access to electricity over the last three years, driven by various government ‘power for all’ schemes, BNEF said that the quality and reliability of electricity supply by Discoms in rural areas remains poor.

While India plans to install 10,000 rural micro-grids with a cumulative capacity of 500MW by 2021, the risk of stranded commissioned assets as a result of grid extension is the biggest concern for investors, said the report. This concern is in fact holding back the speed of deployment of these rural grids, although, five states have released micro-grid policies and regulations in the last two years.

Decentralised energy firms also recently expressed concern about the Saubhagya scheme to provide solar packs to all un-electrified households, claiming that it would hinder the development of micro and mini-grids, which are more scalable, than home systems.

Regarding smaller-scale solar products, BNEF stated: “Off-grid power consumers who use solar lanterns and home systems are now moving to larger devices, leading to up-sell and cross-sell of various small solar products in areas poorly serviced by grid electricity. Micro-grid companies are also encouraging the use of productive load equipment like rice hullers, air coolers and refrigerators in their areas, helping to boost the rural economy.”

India has reached 60GW of renewable energy out of its 175GW target for 2022, found the report.

BNEF estimates that India will need to invest US$83 billion to build its targeted utility-scale renewable energy capacity, which is actually US$19 billion less that BNEF’s previous estimates due to the falling capital costs per MW. This is on top of the US$23 billion needed for rooftop solar.