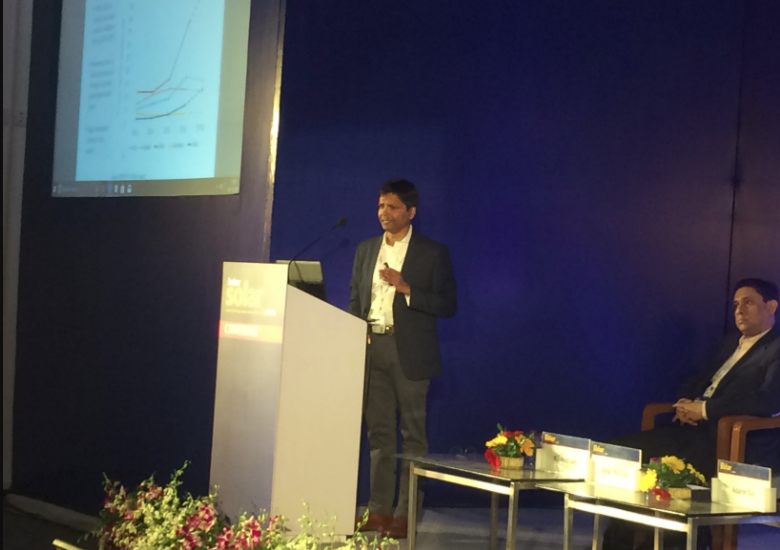 Indian solar tariffs are overdue a major correction and many smaller players are likely to drop out of the sector over the next few years, according to panellists at Intersolar India 2017 in Mumbai.

While Vinay Rustagi, managing director of consultancy firm Bridge to India, framed his comments by predicting the future is still “very bright” for the Indian solar sector, he listed a number of challenges bearing over the industry at present.

The low tariff situation has been partly driven by a major lull in tenders and a frustrating lack of visibility in auction timelines and roadmaps. Rustagi said tariffs remained relatively stable when auctions were coming thick and fast between January and September 2016, but the prices “started falling off the cliff” once the balance between demand and supply for projects became unbalanced.

“From back end of 2016 onwards, the auctions started drying up, the private sector got more aggressive and anxious,” he added.

For example, prices for separate tenders at the Bhadla Solar Park in Rajasthan dropped 45% in just 16 months, a decrease which Rustagi claimed was neither justified by the fall in equipment costs, the increasing project sizes, nor the solar park policy. Instead the price drop was purely down to the tender issuance slowdown and players getting more competitive to win the fewer capacities available.

Adarsh Das, co-founder and chief executive of developer and EPC firm Sunsource Energy, said that the industry has consistently “jumped the gun” on pricing, and until there is more visibility from the government on tendering, it will continue to do so. This is particularly the case now given that the industry has built up large amounts of capital and project execution capability that is hungry to be utilized. Indeed several developers have recently suggested to PV Tech that one driver for aggressive bidding is the need for some companies to keep their large workforces in action.

Referring to the tumbling prices, Das noted: “That does not make for a sustainable industry, but then again, a lot of people are going to drop out.”

Indeed, both Rustagi and Das projected that a lot of smaller players would get consolidated out of the industry, while “non-serious” and small to mid-size players are also set to make an exit over the next few years.

Das said this would make the sector more sustainable over time and the nature of competition will change. Track records, quality and referencing will become more important, with fewer larger competitors vying for capacity and new and smaller entrants finding it very difficult moving forward.

“Capital will no longer be the sole ticket to market. Your customer service, your delivery is going to become more and more important as well as your quality of origination,” he added.

At present, however, competition will remain said Das and the low margins in Indian projects are pushing developers to opportunities in other markets abroad. Sunsource is itself very active globally with multiple projects in the Philippines for example. Looking at opportunities abroad is indeed a sentiment that PV Tech has heard from multiple Indian players over the last two quarters.

Next growth from where?

For Rustagi, the challenge for the sector overall at present is how to maintain its growth of the last three years, ironically at a time when tariffs have come down below grid parity in some cases (INR2.5-INR3/kWh). With still more than 10GW of thermal capacity coming online each year (note that most thermal plants are running at 55-60% PLF) and possibly 4-5GW more of wind capacity, one has to be very realistic in terms of what is the long-term growth path for solar sector in India, he said.

While four southern states have dominated the solar space, they are also now saturated. Rustagi said hope for the next phase of growth now lies with Maharashtra and Uttar Pradesh, the two largest power-consuming states, who between them have barely 1GW of installed capacity. Unfortunately, while the state Renewable Purchase Obligations (RPO) could be a good driver for this, they are still not being enforced.

Despite last week’s central government announcement of roughly 77GW of tenders to come out in just over a two-year period, Rustagi repeated that Bridge to India is “honestly mystified” as to how this would be carried out unless the government has another trick up its sleeves.

The spectre of roads and thermal power

Thus, going back to the tariff issue, if the tender lull were to continue and competition to remain aggressive, Rustagi questioned whether developers can be sure that the projects being built out are sustainable, without creating another phase of non-performing assets (NPAs) or another round of distressed assets for the banking sector.

He added: “Many of these projects, which have been bid out in the last eight or so months, they are actually looking unsustainable, unviable on paper today, and I think the government and the private sector together need to reflect on this an ensure that we don't repeat what has happened in the thermal sector and in the road sector etc.”

Indeed, exactly two years ago in conversation with PV Tech in Mumbai, Vineet Mittal, formerly of Welspun Renewables, had also warned about potential for the solar industry to face the same fate as that of roads and thermal power. Today it seems talk of this unnerving comparison is becoming more widespread.

Rustagi said: “Unfortunately as of now, we don’t see any sign of correction.

“Now on the ground, what is happening is in fact what we’ve been saying for the last one year or so, that the bidding behaviour in this sector is not sustainable.”

One Bridge to India analysis in March reported that India-based developers have been more aggressive than their international counterparts and had not been pricing in risks adequately in their business plans for solar tenders.

Rustagi said: “Developers are taking too much risk and building too much upside into their cash flows and unfortunately that is how things have turned out, we have seen that module prices which kept falling by 20-25% every year have actually gone up by 20% in the last 6-8 months.”

Besides the tariff issues, Rustagi detailed other challenges including on-going lack of clarity on the GST tax, anti-dumping duty threats, delays in solar parks, penalties for delays, modules being stuck at ports, and slowing capacity additions.

Adarsh Das also said that the GST problem had almost brought business to a standstill for many firms during one quarter earlier this year, while the anti-dumping issue needed to be cleared up as soon as possible.

In any case, Bridge to India still sees a significant slowdown from next year onwards, with 9-10GW coming online this year, followed by just 6-6.5GW in 2018.