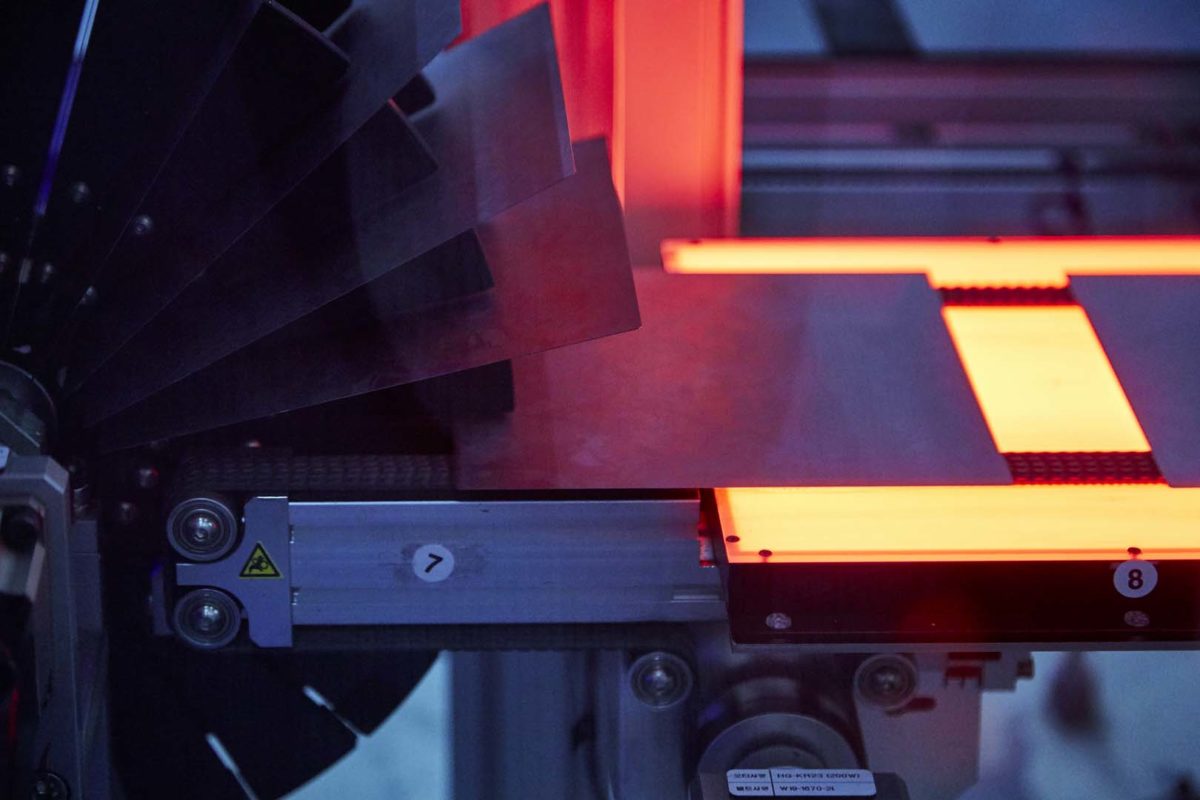 When we visit conferences and industrial players, we are very often surprised at how many responsible scientists for PERC production have never heard about the severe degradation effects that PERC devices can show – in particular when talking about LeTID (Light and elevated Temperature Induced Degradation) alias Carrier Induced Degradation (CID).

Solar PV (Photovoltaic) is becoming quickly the lowest cost electricity source all around the world. LCOEs of around 2ct/kWh have been reached, with one bid in Saudi Arabia from EDF/Masdar being the first to be below 2USct/kWh [1].

In the coming years we will reach numbers of around 1USct/kWh and below- and then everyone can afford electricity. This is also the achievement of new high efficient but low cost technologies such as PERC, PERT and bifacial modules in simple tracking systems such as HSAT (Horizontal Single Axis Tracking).

However, many solar cell and module producers are suffering these days. Asia-based producers are potentially entering a second large crisis due to overcapacity, first experienced in 2011. This second downturn can be attributed to upgrades of existing production lines to PERC.

However, the downstream PV demand in 2018 is expected to stay below 100GWp [3]. This means that many cell lines could be standing idle and many GWs of modules in inventory.

As already mentioned, new innovations are necessary to further reduce the LCOE (Levelised Cost Of Energy). Yet the transformation to PERC was conducted so fast that there are many PERC producers which should also put their focus on product quality.

PERC is a mature technology with a relative simple process and therefore benefits from low CoO (Cost of Ownership). With PERC technology, a record efficiency of 23.6% was reached by LONGi (March 2018) with a busbarless metal contact design and surpassed later with 23.95% by JinkoSolar (May 2018).

Regarding degradation, we are not sure if all PERC producers have understood the challenge to cope with all the degradation effects that this device can additionally suffer from. And this blog is about this:

When we visit conferences and industrial players, we are very often surprised how many responsible scientists for PERC production have never heard about the severe degradation effects that PERC devices can show, in particular when talking about LeTID (Light and elevated Temperature Induced Degradation) alias Carrier Induced Degradation (CID).

Even at he “4th PERC Solar Cell and Bifacial Module Forum 2018” [4] LeTID was not really a topic.

A common response on LeTID we hear, – “LeTID? No – we have no LID: we are stabilizing” or some of them – who are more informed – say: “LeTID only affects mc-Si PERC – we produce Cz-Si PERC”.

None of these statements are true. Even if LeTID had first been observed on mc-Si PERC cells [5], it is an effect which is also visible and detrimental in Cz-Si PERC modules [6] causing very severe degradation, sometimes more than 10% relative in power after weeks of accelerated LeTID degradation.

Due to this, PI Berlin tested and are continuing on testing LeTID on many PERC modules available in the market. Most of the different tested modules (around 10 so far) degraded after 6 weeks of exposure to accelerated degradation by 5% or more relative in power –  the degradation curve did not seem to have reached saturation.

In addition, we have heard of many PERC PV systems “out there” where the modules degraded close to 20% after 2-3 years operation, which is simply a tragedy.

Figure 1 (see below) shows a typical degradation curve measured at PI Berlin, which has been presented at the German workshop “module-tests”, dealing exclusively with LeTID and bifaciality organized by PHOTON at Intersolar Munich in June 2018 [7]. 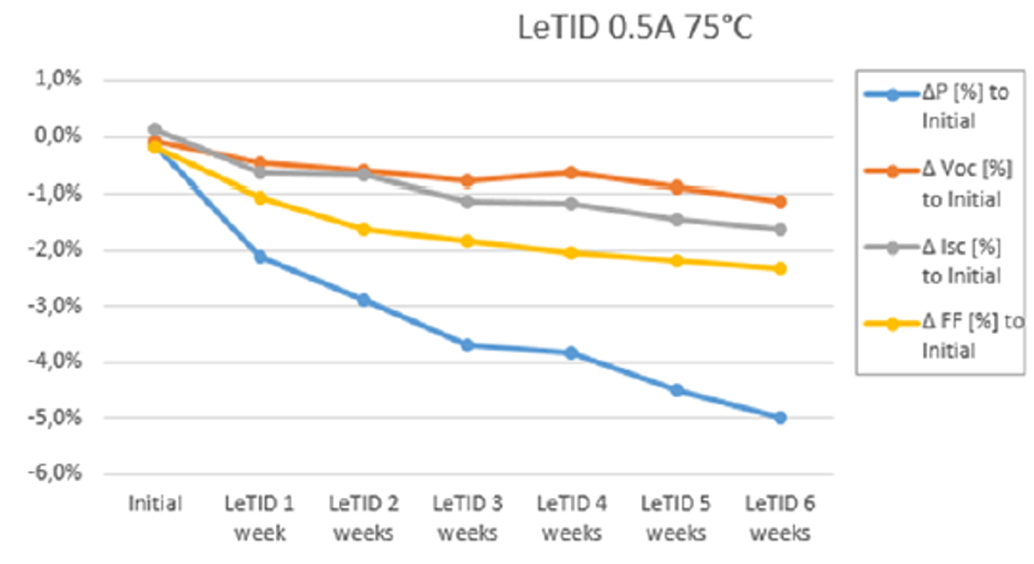 You can clearly see that after 6 weeks at 75°C with an injected current of 0.5A this commercially available Cz-Si PERC module degraded 5% relative in power and the degradation still seems to continue. As there are a couple of groups that claim that also nPERT devices might have such problems [8].

What is happening there in the PERC device? Why do the PERC solar cells still degrade even if people think that they have understood BO-formation and can even control this effect? The degradation mechanisms of more advanced devices start to get more complex, as it used to be with simple Al-BSF (Back Surface Field) cells.

Not only are the efficiencies at a different level –but also with more complex device structure, more potential to degrade and thus degradations are becoming more visible. And in case of PERC it is certainly the rear side dielectrics which is on the one hand boosting the efficiency but also can cause trouble if it is not adapted not only for highest starting efficiencies but also for long-term device stability.

Figure 2 below shows a typical PERC device cross-section and summarizes the 3 most severe degradation mechanisms which are known until now.

LID: The very well-known and mostly understood degradation – LID (Light Induced Degradation) – is based on the formation of BO (boron-oxygen) complexes [9]. It can be partly eliminated by a couple of measures which are described in Table 1.

HID: Hydrogen Induced Degradation (HID) as a cause of LeTID testing was first found in mc-Si PERC devices as reported in [5] and also reported to occur in mono-PERC devices [6]. What is known today is that this degradation is based on too high hydrogen content in the device, which is also beautifully summarized with the bucket theory analogy of the late Professor Stuart Wenham [10] .

This is the case because the rear side passivation is in most cases realised by a rather thick (compared to front side passivation) hydrogen-rich dielectrics. With firing, the released hydrogen into the Si-Bulk, bonds weakly passivating the defect states. With temperature and illumination, these bonds are easily broken, freeing the weakly bonded hydrogen at a faster rate, and thus leading towards degradation.

Over time, a saturation state is reached followed by a recovery process activation, wherein the released hydrogen starts to bond back and passivate the defects with a stable bond, unaffected under LeTiD testing conditions. As for HID, the measures which can be taken to minimize are summarised in Table 1.

Passivation degradation on bare Si-wafer:  It is very difficult to find out the real dominating cause of degradation. Recently A. Herguth and his team at University of Konstanz have discovered that the observed degradation in PERC solar cells is also partly based on the de-passivation effect of the rear side dielectrics [11]. This degradation effect was already observed in IBC solar cells on the front side.

In case of the IBC cells at least a shallow FSF (front surface field; i.e. a phosphorous diffused layer in case of n-type Cz-Si based cells) was needed in order not to see this effect.

Figure 3a and 3b below show testing examples at different places where on the one hand, mc-Si PERC modules (top) on the other Cz-Si modules (bottom), showed severe degradation behaviour. 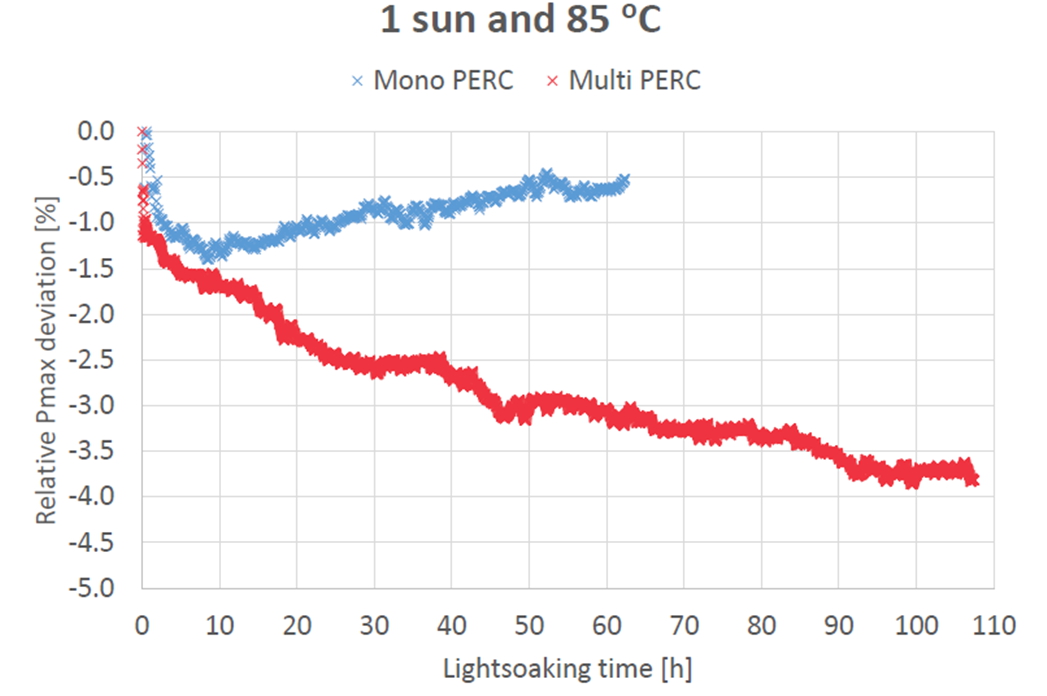 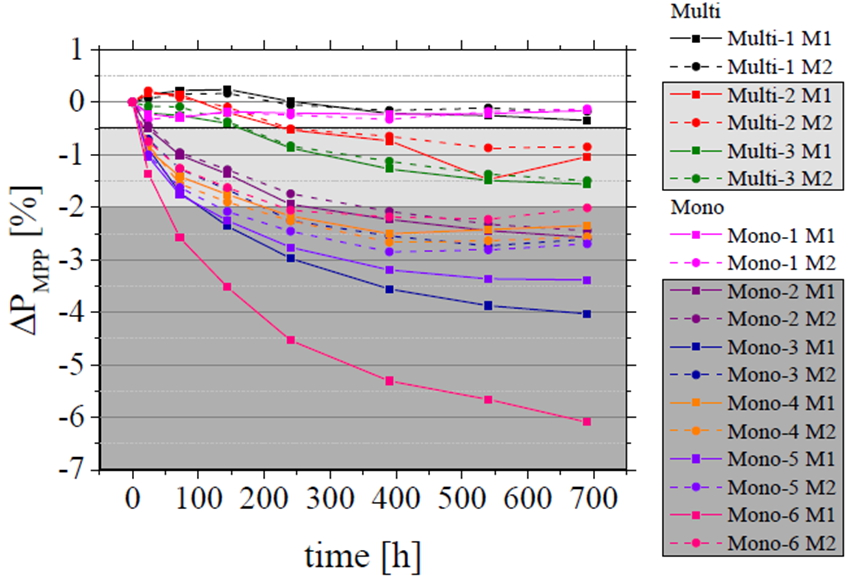 As during the LeTID testing all the three (or two) described effects are possibly activated and a more detailed examination of all modules with problems has to be conducted in order to find the most critical degradation mechanism in that device. When it is identified, solutions for degradation reduction can be tested.

As described, the degradation in PERC solar cells and modules is very complex and cannot be easily understood or connected to only one degradation mechanism. Therefore, as PERC modules also seem to be more affected at elevated temperatures, TÜV also now established this testing in its quality testing procedure. Table I (see below) summarises the most severe degradation effects and possible solutions to reduce them to pass the TÜV testing.

There is of course still PID (Potential Induced Degradation) which has to be controlled but this degradation is related to all modules with the migration of Na and other impurities from glass towards the solar cell surface causing shunts or de-passivation [14].

This degradation can be minimised at the cell, module and system level and is mostly taken care of at the module level by choosing high quality encapsulants, such as suitable EVAs or even switching to Polyolefin films, mostly found with double-glass modules.

We hope that we have provided enough awareness of quite new degradation mechanisms in mc-Si as well as in Cz-Si PERC solar cells.

With this blog we want to motivate PERC solar cell and module producers to better adapt their devices regarding lower degradations and to warn small roof top installers as well as large utility scale EPCs to make the right choice (performing the rights test on selected modules) for their PV systems.

The awareness of this issue by the main players, i.e. cell & module manufacturers on the one hand and system installers on the other hand, will be important to avoid a flood of claims, due to dramatically underperforming PV systems and therefore avoid a potentially severe negative impact on the credibility of PV as a whole.

Good luck, choose wisely and continue to reduce our CO2 emissions so that we can save our great blue planet. Soon we arrive at a total installation of 1TWp. We hope with few of any degradations issues.

19 July 2022
Free webinar - Hear an updated and live talk that was first delivered by PV Tech's Head of Research, Dr Finlay Colville at the PV ModuleTech conference in Napa on 15 June 2022: - The PV industry has moved beyond its legacy supply/demand dynamics: why has this happened? - ASPs can’t go down globally in the near to mid-term: why is this the case? - Is there new capacity coming to the rescue? - Has China’s polysilicon industry become a new PV pricing cartel? - Making products & deploying domestically in a TW annual landscape: how can the U.S. really do this in practice? - The real PV technology roadmap: why do only 2% of producers matter today?
c-si manufacturing, isc konstanz, letid, lid, monocrystalline wafer, multicrystalline wafer, perc, pid, pv modules, solar cell