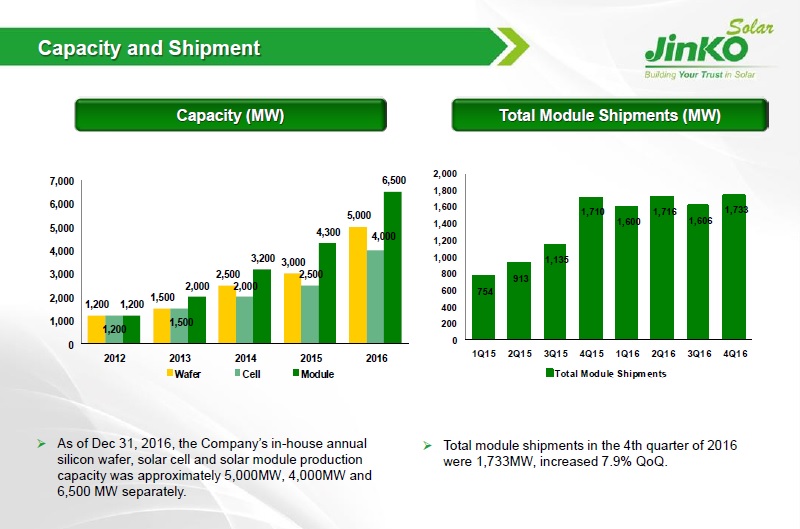 Updated: Leading ‘Silicon Module Super League’ (SMSL) member JinkoSolar has guided 2017 PV module shipments to be in the range of 8.5GW and 9.0GW, a potentially astonishing sequential growth rate after reporting 6.65GW of module shipments in 2016, an increase of 47.5% from 4.5GW in 2015.

Kangping Chen, JinkoSolar's Chief Executive Officer commented, “I am pleased to announce a strong quarter to finish out the year with module shipments hitting 1,733 MW and 6,656 MW in the fourth quarter and full year 2016, respectively. I am proud to say that this puts us firmly in the position as the largest module supplier globally. Total revenues during the quarter hit US$737.6 million and US$3.08 billion for the whole year. While market sentiment is gloomy overall, we remain optimistic about the global demand in 2017.”

“We successfully complete the spin-off process of Jinko Power's project business which generated US$145.2 million in investment gain for JinkoSolar and strengthened our balance sheet by cutting debt to US$892 million from US$2.1 billion. In January 2017, we further cut our debt by repurchasing almost all of our convertible notes due in 2019 at holders' put option. These initiatives have increased our corporate flexibility and reinforced our financial position which will allow us to take advantage of more opportunities in 2017.”

Chen noted in an earnings call to discuss fourth quarter and full-year results that the company expected end market demand in China to remain a 30GW plus market and demand after FiT reductions mid-year would not result in a demand collapse, due to demand generated by programs such as the ‘Top Runner’ scheme. Second-half year demand in China is expected to be around 8GW.

Management also noted that the Top Runner program could be responsible for 5GW to 6GW in 2017.

With continued strong growth momentum expected in 2017, JinkoSolar said that it would be expanding in-house ingot/wafer, solar cell and module assembly capacity this year.

“We remain focused on high-efficiency technologies and stringent quality controls. Demand for our PERC products continues to be strong and as a result, we have been adjusting our production capacity to accommodate this market trend since the first half of 2016,” added Chen.

The company is still limiting in-house solar cell capacity expansions, adding only 500MW in 2017 to take nameplate capacity from 4GW at the end of 2016 to 4.5GW by the end of 2017.

However, the company noted that it was further migrating cell capacity to PERC (Passivated Emitter Rear Contact) technology, having reached 1.4GW of in-house PERC capacity in 2016. The company plans to have reached 2GW of PERC capacity by the end of 2017. JinkoSolar was also migrating to 'black silicon' wafer texturing to boost conversion efficiencies in 2017.

Management noted that it expected capital expenditures for 2017 to be in the range of US$400 million to US$500 million, focused on the mono wafer and PERC capacity expansions and upgrades. 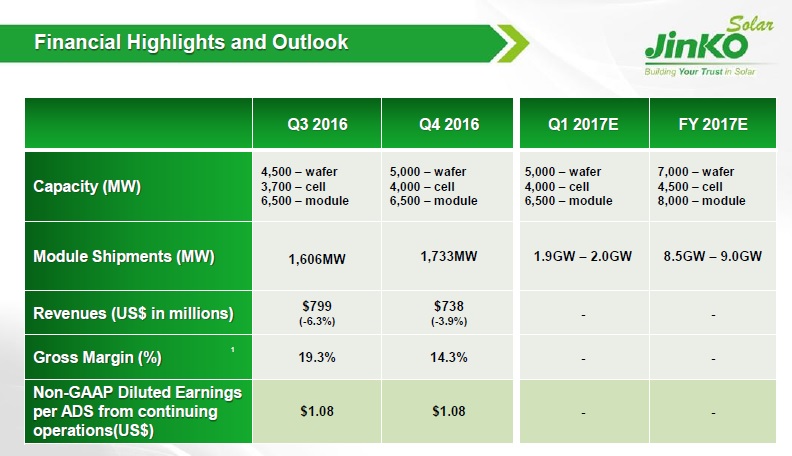 JinkoSolar reported fourth quarter total solar module shipments were 1,733MW, an increase of 7.9% from 1,606MW in the third quarter of 2016.

Total revenues including electricity revenue from discontinued operations were RMB5.23 billion (US$753.0 million), a decrease of 8.3% from the third quarter of 2016. 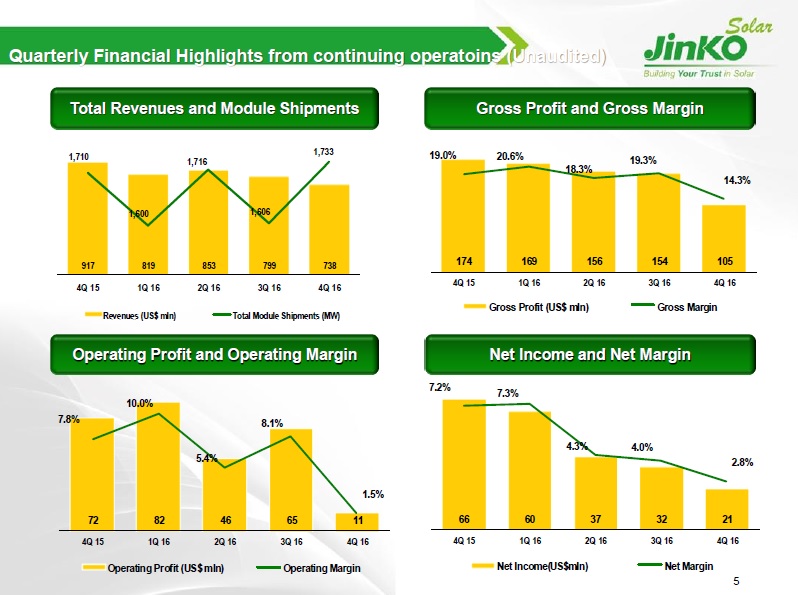 Management noted in the earnings call that it expected overall strong demand to continue in 2017, citing China, US and India as key markets. With strong demand, JinkoSolar expected relatively stable module ASP’s in the first quarter of 2017 with price levels seen in the fourth quarter of 2016.