JinkoSolar’s record quarterly shipments are also an industry milestone, becoming the first module manufacturer to ship over 2GW of modules in a quarter. However, the global quarterly shipment record is not set to last long. JinkoSolar guided second quarter shipments to be in the range of 2.5GW to 2.6GW. 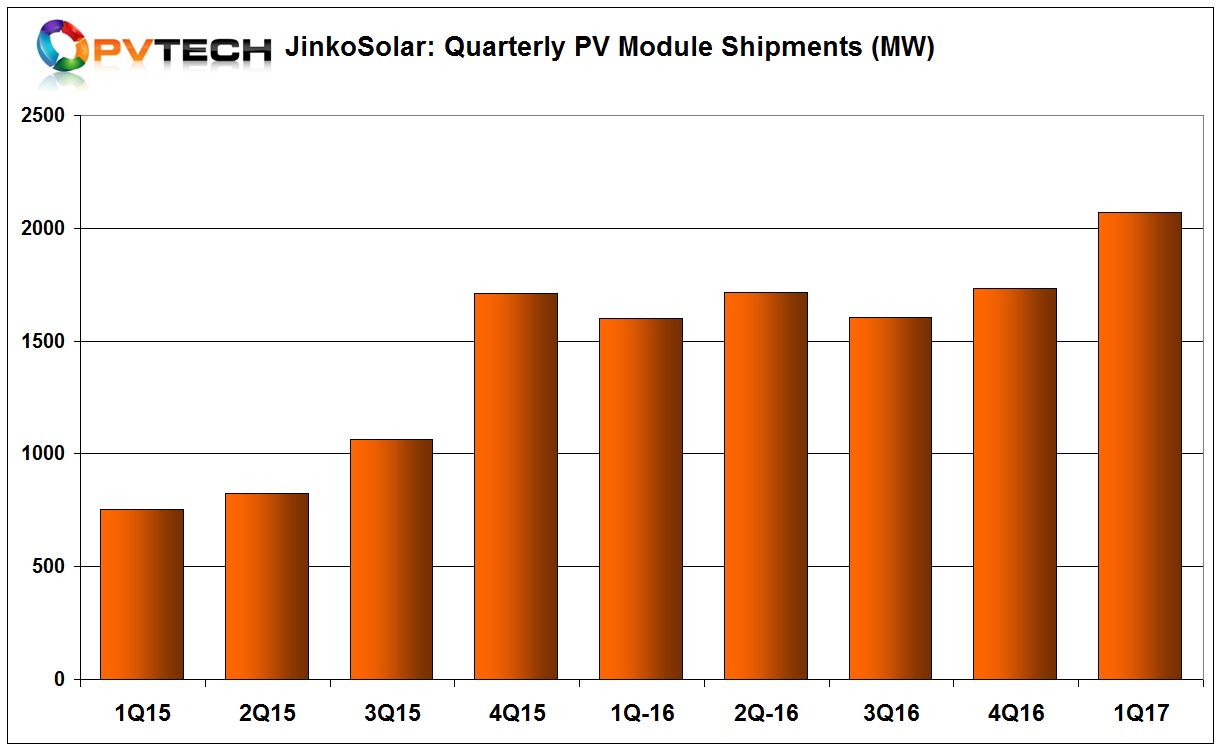 Kangping Chen, JinkoSolar's Chief Executive Officer commented, “Module shipments during the quarter hit a record high of 2,068MW, a 19.3% increase sequentially while generating US$839.3 million in revenue. We continued to capitalize on the growing recognition of JinkoSolar's brand and high quality products and services to increase our market share and capture new opportunities during the quarter.”

The company also reiterated full-year 2017 shipments to be in the range of 8.5GW and 9.0GW.

JinkoSolar’s confidence in its full-year guidance rests with its global footprint and strength in the Chinese market.

“Demand in China remains strong with growth momentum expected to continue into the next quarter. While the June 30 Feed-in-Tariff has created some uncertainties in China's utility-scale market, we haven't seen demand weaken. Our deep involvement in the Top Runner and PV Poverty Alleviation projects as well as distributed generation projects will provide strong support for demand during the second half of the year,” added Chen.

Despite the record shipments, JinkoSolar was notably impacted by supply chain dynamics. Higher polysilicon purchase prices in the upstream and strong module ASP declines in the downstream led to further gross margin squeeze.

“Our gross margin contracted to 11.2% from 14.3% last quarter as a result of a slight decline in the average selling prices (“ASP”) of solar modules, increased silicon prices and material costs caused by a shortage of supply in the first quarter. We believe our margins have room to improve in the second quarter and throughout the second half of the year as our mono wafer and PERC cell capacity increases and polysilicon prices stabilize,” noted Chen.

Gross profit in the quarter was US$94.3 million, down from US$105.1 million in the fourth quarter of 2016. The sequential and year-over-year declines were mainly attributable to a decline in the ASP of solar modules in the first quarter of 2017.

The company held higher inventory in the first quarter of US$780.2 million, compared to US$644.3 million at the end of the prior quarter. JinkoSolar said the inventory build was due to strong anticipated demand during the second quarter of 2017. 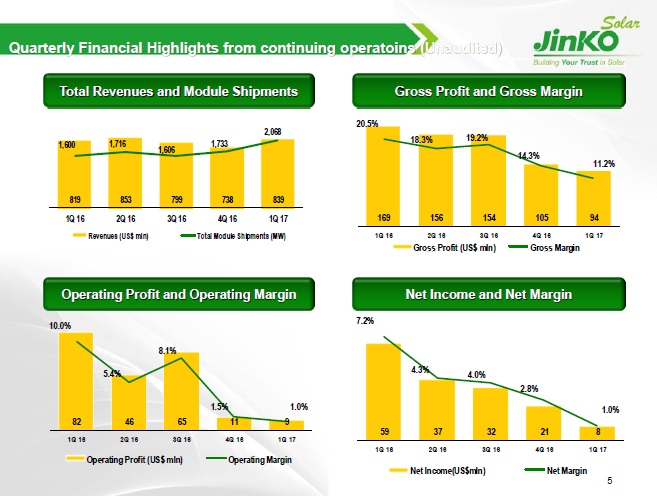 JinkoSolar noted that it continued to ramp its in-house capacity of monocrystalline wafers and PERC (Passivated Emitter Rear Cell) capacity, which is expected to reduce the overall cost of mono-based modules and also halt margin pressures.

The company noted that mono PERC products remained in short supply and that its capacity has already been fully booked out for the rest of the year.

However, in-house capacity levels at the end of the first quarter of 2017 remained at the same levels as the fourth quarter of 2016. Wafer production stood at 5GW, solar cell at 4GW and module assembly stood at 6.5GW.

With strong module shipments in the first quarter and further increases guided in the second quarter, JinkoSolar management noted in its earnings call that it had increased reliance on OEM third-party module supply to meet demand. This also impacted margins in the quarter.