Manufacturing under one roof: the gold standard for module consistency and reliability? 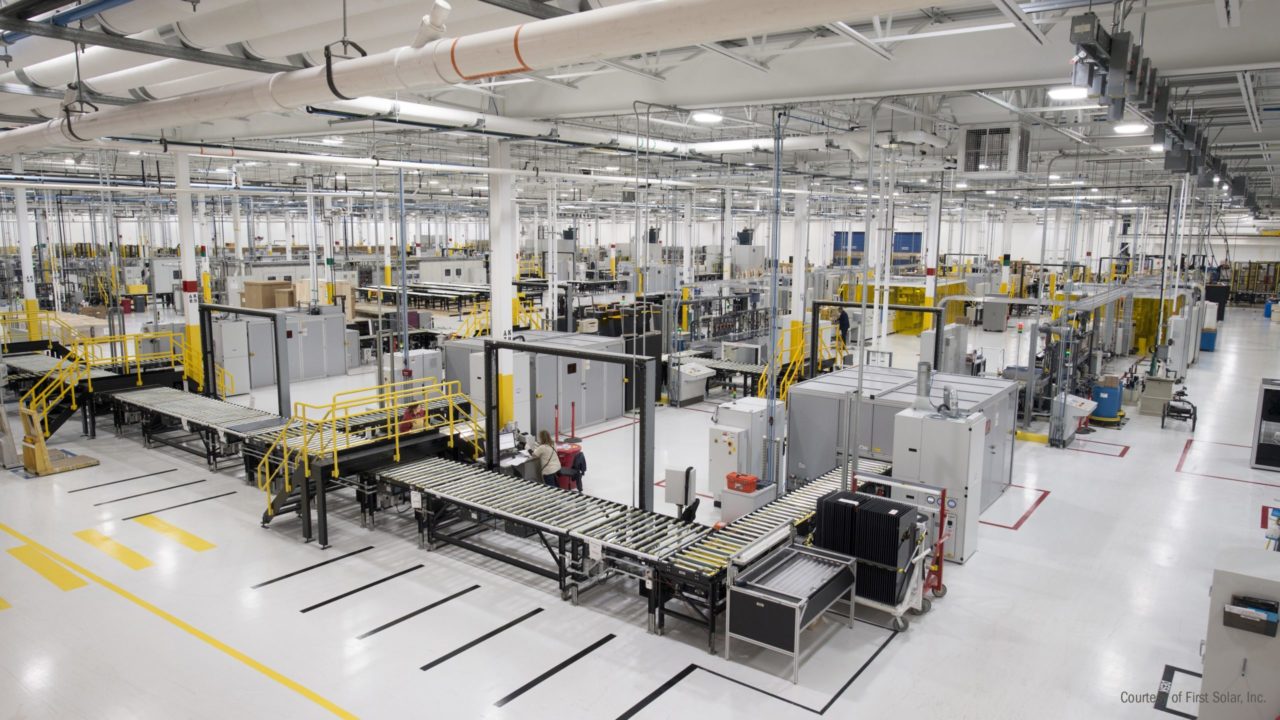 When manufacturing capacities moved from megawatt to gigawatt ten years ago, the concept of having a fully-integrated and automated production site was widely accepted to be the most effective route to capitalize on economy-of-scale attributes from having all steps in the raw-materials-to-finished-goods value-chain managed under one roof.

This concept was promoted widely in the past with the emphasis being that a single production facility is uniquely positioned to control production costs in-house. It often formed the basis of the marketing approaches from turn-key production line suppliers (across both c-Si and thin-film) and from regional groups promoting domestic production with local jobs.

However, approaching the end of 2017 – a year when the solar industry is expected to ship close to 100GW of modules – the inherent benefits of the fully-integrated fab (that addresses product quality and reliability metrics behind bankability) have been adopted by remarkably few (if any) c-Si based multi-GW-level module suppliers.

This article explains how this situation has evolved; and why the current trend of c-Si module suppliers to run multiple production sites (often across different countries and continents) with strong levels of sub-contracting (frequently changing), is adding to the risk profile of investors and asset owners.

These core themes are set to be explained for the first time at the forthcoming PV ModuleTech 2017 conference in Kuala Lumpur, Malaysia, on 7-8 November 2017, details of which are outlined also at the end of this article.

What is the one roof/factory model?

Modules are far from commoditized products, a fact often misinterpreted by the industry or miscommunicated across downstream stakeholders. Solar modules have to perform with predictable and reliable performance for 25+ years, often in harsh and demanding environments.

Return-on-investment, for the homeowner with a kW-based installation, to a several hundred MW utility solar farm, is critically dependent on the choice of modules and module suppliers, and the ability of investors to perform the necessary in-depth technical and commercial auditing of the issues important to manufacturing.
Modules based on c-Si have four basic stages in the value-chain, if we classify polysilicon as the raw material source:

The original concept of the one roof/factory model for c-Si was based on having all four stages within a single integrated fab. This was proposed mainly to bring down (non-silicon) production costs.

However, this model never came to fruition for c-Si module suppliers, due to many reasons. Perhaps this explains why the c-Si sector generally does not discuss the one roof model as being important to drive product consistency, quality and reliability, and bankable single BoM’s.

The reality of c-Si production today could in fact not be more different, shaped by having discrete companies dominating the ingot/wafer supply-chain, and cell/module diversity that has become a complicated and moving target, pushed-and-pulled by constant trade-related origin-of-manufacturing based rules and regulations.

This can be seen clearly across all GW-level c-Si module suppliers today, where ingot and wafer supply is primarily done by different companies, often located in different countries. In fact, ingot pulling/casting and wafer slicing facilities are typically in different factories or locations even for the major suppliers that have evolved with balanced ingot/wafer capacities.
Outsourced sub-contracting is also employed for each of these stages on a regular basis, especially when market demand and sales pipelines fluctuate, often to companies that most people outside China or Taiwan will not be aware of.

As we discussed recently in a feature article on PV-Tech titled Module quality emerges as new marketing tool for the solar industry, the supply-chains for leading c-Si module suppliers becomes further complicated owing to the high levels of outsourcing to third-party cell and module producers. Many of these third-party producers have evolved quickly across Southeast Asia in an attempt to circumvent made-in-China import barriers for shipping c-Si modules into Europe or the US.

Therefore, when trying to qualify c-Si module suppliers from a technical or commercial due-diligence perspective (factors that underpin bankability), the range of companies making the components of the module – including their respective BoMs, processes, quality-checks and financial health – is anything but simple and transparent.

The challenge in terms of module authenticity goes way beyond the name of the company appearing on the final module product being sold. Indeed, for many buyers of c-Si modules, there can be limited documentation provided to clarify if the modules were in fact made in-house by the company selling them, or by tolled or contracted third-parties.

As we revealed in our recent analysis also, Hanwha Q-CELLS and JA Solar are the leading multi-GW c-Si module suppliers with the highest percentage of in-house produced cells and modules used within their company-branded modules. However, in common with almost all other leading c-Si module suppliers, each has multiple cell and module locations in different countries making a range of c-Si module types (mono, multi, black-silicon, PERC, 60 and 72 cell modules, etc.).

This goes a long way to explaining why there are so many organizations, approaches and methodologies involved in third-party module testing, certification, factory-auditing and bankability reporting within the c-Si segment of the solar industry today; and indeed why this group of third parties is so vital for module buyers and investors.
It also explains why EPCs, project developers and investors simply have to get more educated on the full audit trail of companies, processes and materials involved in the selection of modules used at their sites.

This is especially true for final asset owners, many of whom enter solely in the secondary market buying completed solar farms, having had no involvement at all in decision-making processes for component supply or build-quality of their acquired assets.

Where thin-film differs from c-Si

Thin-film solar manufacturing remains the one differentiated product offering to the solar industry today, where semiconductor layers are deposited on glass panels. Broadly speaking, there have been three different technical approaches taken by companies over the years: CdTe, CIGS and a-Si.

Attempts by companies to commercialize a-Si based variants went through a brief period many years ago, before limitations on panel efficiencies, high manufacturing costs and equipment reliability ultimately rendered this technology obsolete in the solar industry today.

Only two companies succeeded in ramping thin-film approaches to the GW or multi-GW levels in manufacturing; First Solar for CdTe, and Solar Frontier for CIGS.

Currently, First Solar is the only company to reach multi-GW levels of thin-film capacity that has been fully utilized with factory/process duplication across multiple sites.

Thin-film production is inherently a single-location manufacturing technology, and as such, it could be argued that First Solar is the only major GW-level solar module producer (across both c-Si and thin-film) that can lay claim to operating the one-roof model, and furthermore rolling out identical factories in different locations with the same production equipment and materials suppliers.

One roof, one process, one BoM and the role of R&D

Another key point inherent to the one-roof concept – that has been somewhat lost during the industry growing from 10GW to 100GW annual demand – relates to the ability to focus R&D efforts and BoM consistency into one manufacturing process or product only, in a repeatable and predictable manner.

In particular, the R&D issue is particularly revealing in this respect, and has been a recurring theme in PV-Tech market studies for the last 10 years, summarized recently in this feature article: 10 years of R&D spending analysis of 12 key PV module manufacturers.

There are many factors driving R&D spending levels, and often it simply comes down to the company’s balance-sheet and long-term investment strategy.

However, for years it has been a source of confusion why the vast majority of c-Si module leaders have been allocating R&D budgets in the single-digit percentage levels (of turnover), a figure markedly lower than seen across adjacent technology sectors such as semiconductor and displays.

Perhaps though much of this can be traced to the lack of companies that have in-house control over all stages of the value-chain in producing 100% of the module components (whether under one roof or not).  Add to this product variety across c-Si module types, and it raises the question of where to even allocate R&D efforts, far less what sums are being budgeted.
In looking at the 10-year R&D summary graphic at the company level in the above-cited article, this goes some way to explain why First Solar has been in a position to channel R&D funds at much higher levels than the industry norm.

In the c-Si space, only SunPower (from the companies sampled in the 12 key manufacturers) has had a consistently high level of R&D spending in the last 10 years, with much of this traced back to the one-process approach (IBC cells) and proprietary ownership of all in-house equipment and manufacturing steps, although mainly at the cell stage. SunPower’s R&D spending has historically been spread across different technology types, including the dormant CPV efforts and the existing Chinese joint-venture project for singulated-cell based modules.

In addition to the ability to focus all R&D spending into one manufacturing process flow, the other main difference in the one-roof approach is having a single BoM for all modules produced. The implications of this are possibly yet to be fully appreciated, but certainly explains the attention on module encapsulants, for example. If substandard materials are used for encapsulants, module performance in humid (or other harsh) climates can suffer dramatically.

Module BoM traceability is rapidly becoming one of the most discussed, debated and dissected issues for utility-scale solar farms, with asset owners and O&Ms often being the ones burdened by underperforming modules whose failure modes can be traced back to a lack of quality checks for critical materials used in manufacturing.

Are we likely to see any changes going forward?

In looking at the current in-house manufacturing strategies of leading c-Si module suppliers, there does not appear to be any great momentum to adopt a one-roof/factory approach.

There also remains a desire from leading c-Si module suppliers to set annual shipment guidance above in-house effective capacities, necessitating the continued use of outsourcing through third-party OEMs.

In addition, the c-Si technology landscape is going through rapid changes from multi to mono, the use of PERC cell types, an increase in the use of 72-cell modules, and even the introduction of glass/glass modules. Therefore, flexibility in supply is almost guaranteed for c-Si module suppliers to retain market-share aspirations.

While the thin-film segment retains a number of small players with limited production capability or global bankability status, this technology segment is certainly going to remain dominated by First Solar, with the company releasing its Series 6 panels in volume next year.

Module quality is the underlying theme behind all the topics and themes that will be discussed at PV-Tech’s forthcoming PV ModuleTech 2017 conference in Kuala Lumpur, Malaysia, on 7-8 November 2017.

Speakers at the event have been selected from the different stakeholders that are fundamental to producing, inspecting, certifying, and auditing the leading module suppliers, and their equipment and material selection.

The two-day event is the first dedicated industry conference to address and explain these issues clearly to developers, investors and asset-holders, and why looking in detail at the checks in place to choose both module supplier and technology-type is essential to maximise investment returns.