As we conduct our extensive market research phase to define exactly what the industry needs to be discussing and presenting at PV CellTech 2017 in Penang, Malaysia on 14-15 March 2017, one of the top technologies that is certain to be included again is passivated emitter rear contact (PERC) cells.

Last March, at the inaugural PV CellTech event in Kuala Lumper, we had a whole afternoon dedicated to PERC, and all the leading cell manufacturers (in volume production of PERC) each presented on their company’s technologies, achievements and targets for future capacity upgrades and expansions.

Next year for PV CellTech 2017, the indications from our research so far would certainly merit PERC again being a key topic, but our approach is likely to move one step forward from March 2016, and look at some of the issues that are indicative of a new technology moving from first-movers to industry-prevalent. Or indeed, if there are more attractive options for cell makers to pursue.

Among these topics may include the status of one of the two key tool types used in making the transition from standard to PERC cells: laser-based systems for contact openings.

PERC has become the first major application for lasers in the mainstream c-Si cell sector in the solar industry, with all other applications either legacy/dormant or as part of process flows that may reside permanently in the research lab or at best make it into production, several years from now.

In contrast to deposition equipment suppliers for PERC (of which Meyer Burger is by far the dominant), the landscape and choice for laser tools would appear to be more diverse. This includes the most active European based laser equipment suppliers, InnoLas Solutions GmbH (InnoLas) and 3D-Micromac AG, and Asian tool suppliers, of which the most successful to date have been Wuhan DR Laser Technology Co., Ltd (Dr Laser) in China and TeraSolar Energy Materials Corp., Ltd. (TeraSolar) in Taiwan.

Indeed, at the recent SNEC show in Shanghai during May 2016, DR Laser was prominently displaying marketing banners stating the company had shipped more than 8GW of PERC laser tools to the PV industry.

Given the trends in recent years for Chinese cell manufacturers to seek to implement a greater quantity of production equipment from Chinese-based suppliers, this potentially represents a threat to how much companies like InnoLas and 3D-Micromac can follow the PERC trends from Southeast Asia and Taiwan back into Chinese cell manufacturing.

The graphic below shows the latest PERC forecast for production output from solar cell manufacturers out to the end of 2017, taken from the July 2016 release of our PV Manufacturing & Technology Quarterly report. 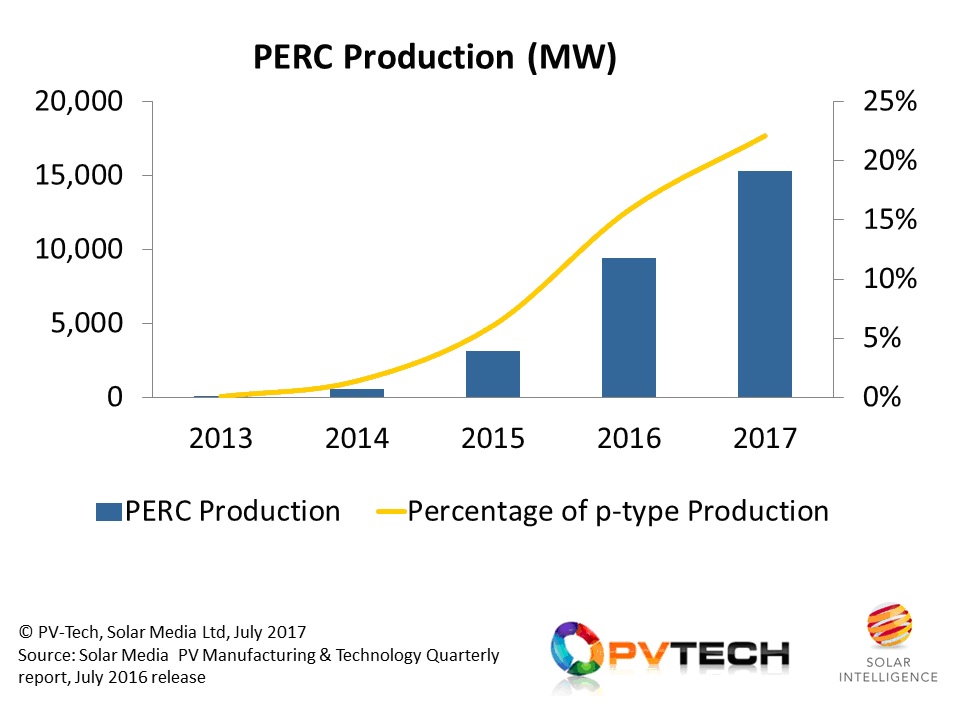 When talking about PERC, it is important to frame the market-share allocations to the percentage of p-type production only that is made with PERC based processes, not the entire c-Si or solar industry production figures. This is shown below in the graphic.

PERC cell production is forecast to exceed 15GW in 2017, accounting for more than 20% of all p-type solar cells produced in the year.

Comparing the forecasted 2017 production figure to DR Laser’s 8GW of shipped capacity – and factoring in estimates of how much laser-based equipment has shipped from Innolas and 3D-Micromac – clearly takes us well above the production figures being tracked across the different cell manufacturers.

Of course, there are many reasons for this, including an overestimation of the capacity of the tools when introduced into an existing production line, the fact that a significant amount of equipment has been going into R&D or pilot lines that are not impacting module supply greatly, and the tendency of equipment suppliers to include R&D equipment that resides within academia.

After the 2-day PV CellTech 2017 event next March, it is likely there will be greater visibility on which laser tool suppliers are going to benefit from any further uptick in PERC capacity being installed specifically in China, and whether or not this market opportunity will be dominated by local laser tool suppliers or will become another process equipment type that is controlled by more advanced tool supply coming from Europe.

Attendance at the PV CellTech 2017 event is likely to be oversubscribed, so be sure to book now to ensure participation. Feel free to use the comments box below also to flag any PERC based issues you would like to see us prioritize at the conference.