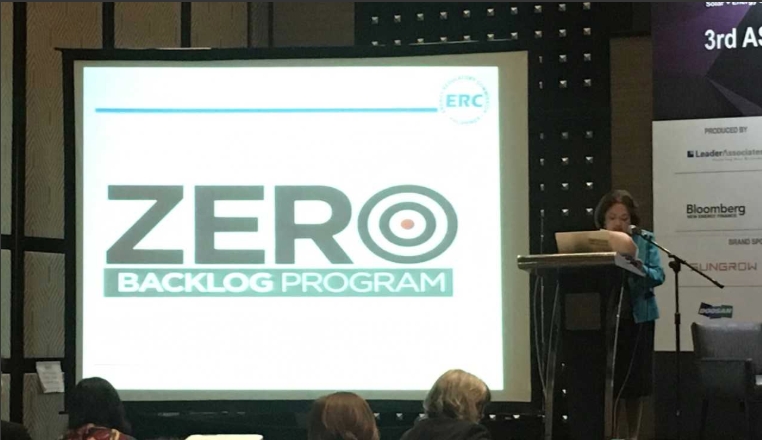 The new chairperson of the Philippines Energy Regulatory Commission (ERC) has showed clear intention to solve the huge build-up of pending approvals of power projects, in what she dubbed as the ‘Zero Backlog Program’.

Agnes Devanadera, chairperson and CEO, Energy Regulatory Commission (ERC), speaking at the ASEAN Solar + Storage Congress & Expo in Manila, the Philippines, organised by Leader Associates, said there are now roughly 600 pending submissions and admitted that the commission is “running out of space”.

In October last year, PV Tech reported how utility-scale solar projects and hundreds of other power projects in the Philippines were being held up by pending approvals at the ERC after four out of five ERC commissioners were given one-year suspensions for anti-competitive behaviour.

This huge backlog was the reason for many developers and investors airing their frustrations about the stagnancy of the Filipino utility-scale PV market, yet overall they remained extremely optimistic in the long run, particularly with the projected growth rate of energy demand in this swelling economy.

The chairperson of the newly reconstituted ERC received enthusiastic rounds of applause from the audience several times, as they learned of intentions to spearhead a “paradigm shift” at the commission.

While much of the positivity was only in rhetoric, Devanadera noted at least that the ERC is targeting to more or less solve the backlog issue within 18-24 months, although many in the industry were hoping for even faster timelines.

Nonetheless, there was optimism about the apparent open-mindedness of the chairperson, her willingness to answer direct questions and seek advice and expertise from outside the Philippines, as well as her acknowledgement of the serious backlog issue.

The ERC is now holding workshops on the pending applications, hiring consultants, increasing staff numbers, and having the commissioners and the chairman also involved in public consultations.

ERC is also set to promulgate rules on distributed energy resources (DER) and micro-grids in Q1 2019. Meanwhile, for the infamous Competitive Selection Process (CSP), ERC is working more closely with the Department of Energy (DOE) to “iron out the conflicts” in the rules of both organisations.

In terms of energy storage, Devanadera said that the ERC would soon start the process of formulating rules for storage, but it is currently catching up on the regulations used in the rest of the world and has created study groups to tackle this issue. Having already received proposals on how the new rules should be structured, the chairperson encouraged the industry to continue sending in proposals since they will be used when a consultation is finally issued.

She added that she was hopeful that solar-plus-storage technology would soon be propagated across the country.

Tetchi Capellan, president of both SunAsia Energy and the Philippines Solar and Storage Energy Alliance, said that the case for storage is already clear due to curtailment of around 300MW of solar power produced in the Negros region, where none of the projects are currently using batteries.

However, she noted: “We are in the very very initial stage for utility-scale energy storage.”

Apart from the economic drivers of energy demand, Itamar Orlandi, head of Frontier Power at Bloomberg New Energy Finance revealed forecasts that while air conditioning accounted for less than 20% of the Philippines’ demand at peak times in 2017, this percentage will grow to 40% by 2040.