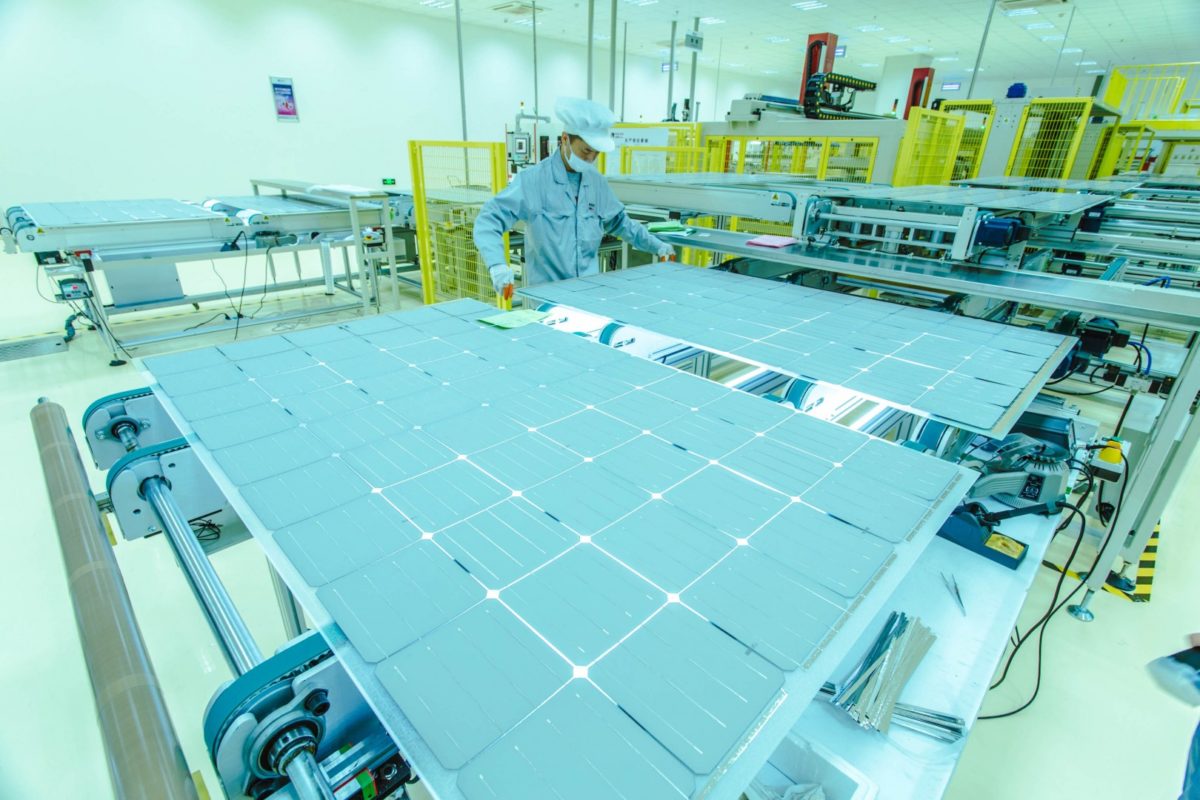 Setting the tone for a year that has seen large-scale manufacturing capacity expansions and new size wafers and modules, LONGi announced plans to construct a new 20GW wafer plant in Yunnan province, China, with an ambition to grow the facility to 40GW in the future. The company then went on to secure two separate three-year wafer supply deals that together are purported to be worth more than US$3.3 billion.

But LONGi was not finished there. After expanding its business overseas through the acquisition of Vietnamese PV cell and module manufacturer Vina Solar, the firm then started production at a new 5GW module assembly plant to produce its Hi-MO series modules using large area 166mm x 166mm (M6) wafers. The company said at the time that output at the facility would be “at the forefront of the industry”.

Q1 also saw a significant module manufacturing development from Trina Solar, which launched its Duomax V bifacial double-glass modules based on 210mm silicon wafers and mono-PERC cells, a landmark that the company said would see it embrace a “new era” of solar. Compared to more conventional 410W bifacial double-glass modules, the Duomax V can reduce balance-of-system costs by between 6 – 8% and the LCOE of projects by 3 – 4%, according to Trina.

In terms of polysilicon manufacturing, Daqo New Energy was said to have taken the average total production cost of primarily monocrystalline-grade polysilicon to a record low, while Tongwei announced it would significantly increase high-purity polysilicon production and high-efficiency solar cell production over the next five years.

China’s dominance in solar manufacturing had a knock-on effect elsewhere, however, as Wacker’s polysilicon division revealed it had slumped to a loss in 2019, with CEO Rudolf Staudigl noting that underlying conditions for solar-grade polysilicon “remained unsatisfactory”, with prices falling “amid high overcapacity built up by state-subsidised competitors in China”. Meanwhile, South Korea’s Hanwha Solutions said it would close its solar-grade polysilicon production business by the end of 2020. Polysilicon pricing would remain turbulent throughout the year

The effects of COVID-19 on the manufacturing sector were noted early in the quarter, with component shortages and factory closures slowing production. Official data from China said solar exports from the country in January were around 35% lower than in the prior year period.

“To deliver that, trillions of dollars will need to be invested in replumbing and rewiring the world’s energy system.”

A recuring theme for the year has been oil and gas (O&G) majors announcing aggressive green energy capacity expansion targets alongside plans to reach net zero emissions. The “deep pockets” of the O&G industry could be crucial in accelerating the deployment of renewables, the International Energy Agency (IEA) said a report. After increasing its stake in PV project developer Scatec Solar in late 2019, Norway’s Equinor pledged to achieve net zero greenhouse gas emissions at operations by mid-century, by which time its O&G production business is expected to have halved in size.

Taking a similar strategy was BP, which, having upped its stake in global solar developer Lightsource BP to 50% last year, announced it would aim to attain net zero status “by 2050 or earlier”. The company’s CEO Bernard Looney said at the time that the world needed a “rapid transition to net zero”, adding that energy that is just reliable and affordable is “no longer enough”. “It must also be cleaner. To deliver that, trillions of dollars will need to be invested in replumbing and rewiring the world’s energy system. It will require nothing short of reimagining energy as we know it.”

Before announcing its own net zero target later in the year, France’s Total was especially acquisitive in the solar sector in Q1, taking a 50% stake in Indian conglomerate Adani Group’s solar business for approximately US$510 million and purchasing a 1.2GW portfolio of projects from Spanish firm Solarbay. Eni’s new emissions reductions plan, meanwhile, foresees the Italian company deploying 55GW of renewables by 2050, as it focuses on green energy developments mainly in OECD countries.

As well as the manufacturing-related disruptions, COVID-19 and the resulting lockdown measures began to impact PV project development, as BloombergNEF reduced its global solar demand forecast for 2020. The research organisation highlighted the possibility that the pandemic may have such an impact on demand that 2020 could mark the first time in several decades when annual demand falls below that of the previous year.

Meanwhile, the IEA called on countries to keep the clean energy transition “front of mind” as they prepared coronavirus stimulus packages.

The impacts from the pandemic must not be allowed to compromise the “inescapable challenge” of climate change and global emissions, IEA executive director Fatih Birol said. “The coronavirus crisis is already doing significant damage around the world. Rather than compounding the tragedy by allowing it to hinder clean energy transitions, we need to seize the opportunity to help accelerate them.”

15 September 2022
Bifacial PV modules will be the dominant solar PV technology globally within one or two years; in the utility-scale sector, their market share is already above 70%. This webinar will provide a clear view on the successful implementation of bifacial technology, maximizing system performance and minimising LCoE.
bloombergnef, bp, covid-19, decarbonisation, eni, iea, lightsource bp, longi, polysilicon production, review of the year 2020, tongwei, trina solar