TAIWAN ROUND-UP: A recovery in revenue of sorts underway in May

A basket of publicly-listed solar companies on the Taiwan Stock Exchange (TSE) have mainly posted a rebound in revenues for the month of May.

The rebound has been driven by increased demand and strengthening ASP’s, due primarily to demand in China to meet utility-scale PV project completions, dictated by feed-in tariff changes at the end of June, 2017.

However, revenue for many listed companies in Taiwan remain well below 2016 levels and for some revenues remain around 50% lower than in the prior year period and have also been impacted by strong ASP declines since the third quarter of 2016.

The company said that the strong rebound in revenue was due to increase ASP’s as well as a recovery in demand. NSP also noted that the revenue increase was partially due to an increase in the production of monocrystalline product shipments in May.

However, NSP’s revenue remains 62% below the level set in the prior year period.

The company also noted that the completion of newly installed equipment for a 200MW module assembly facility in Taiwan would be completed by the end of June, 2017. 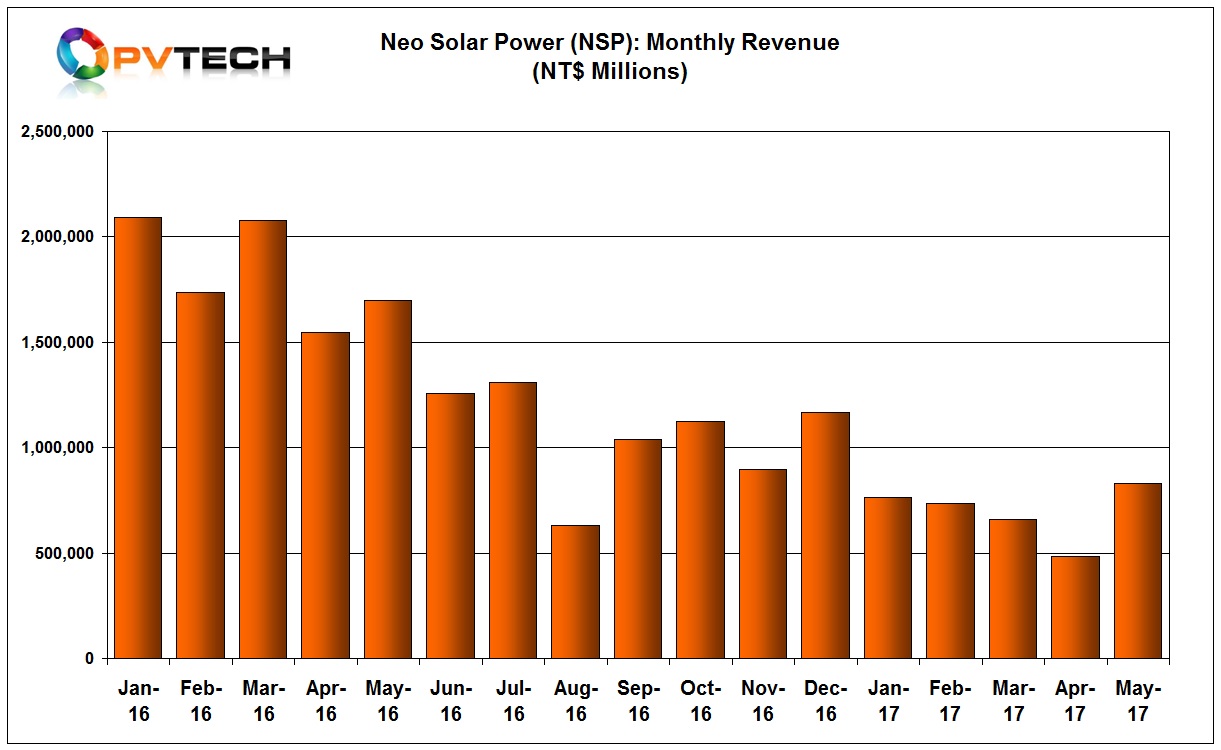 Merchant solar cell producer Solartech Energy Corp reported a continued recovery in revenue in May, which started at the beginning of the year.

Revenue remains down nearly 36% from the prior year period and 53% on a cumulative year-on-year basis. 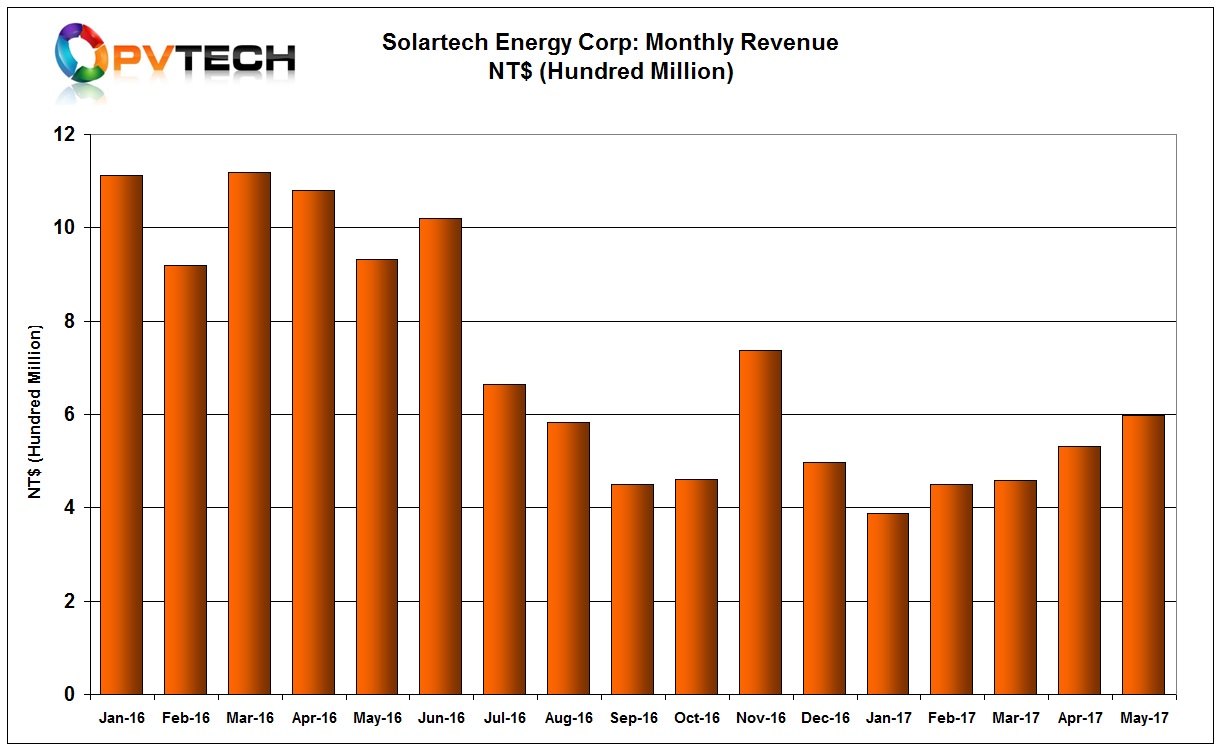 Merchant solar cell and module producer Gintech Energy has been reporting lumpy monthly revenue figures in 2017, however revenue increased strongly in May. 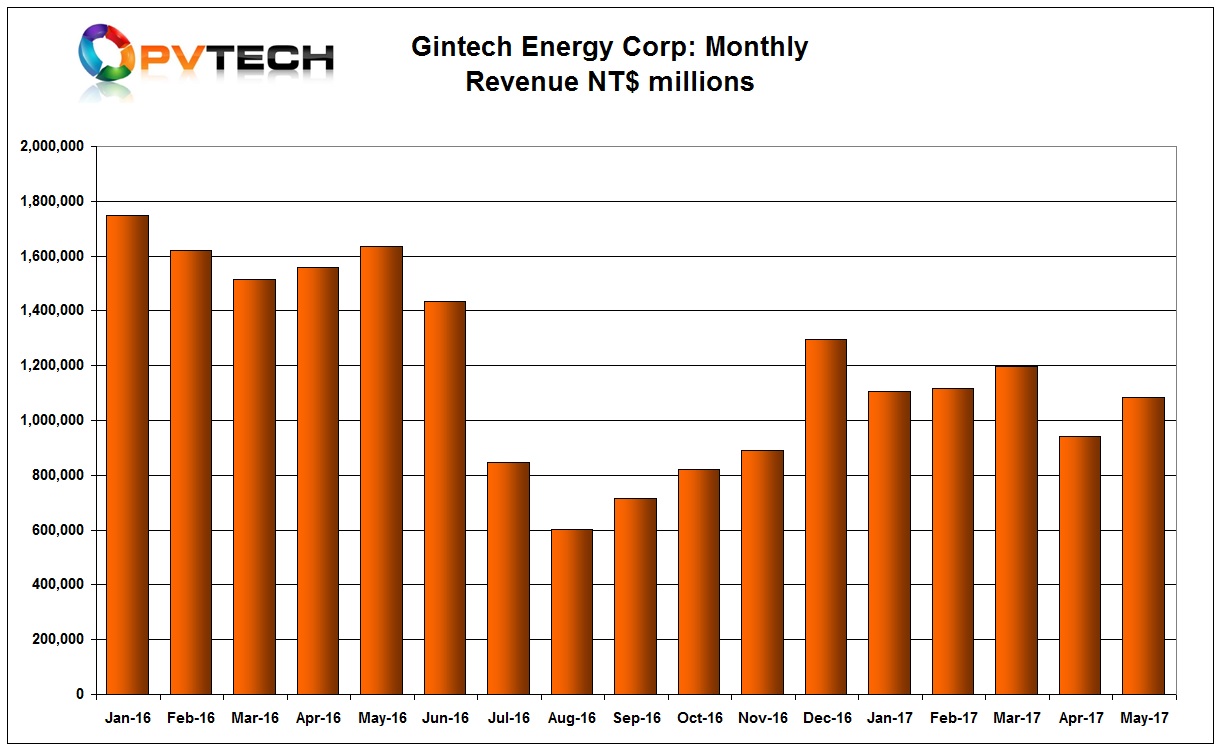 Revenue is down nearly 37% from the prior year period and nearly 45% down on a cumulative year-on-year comparison basis. 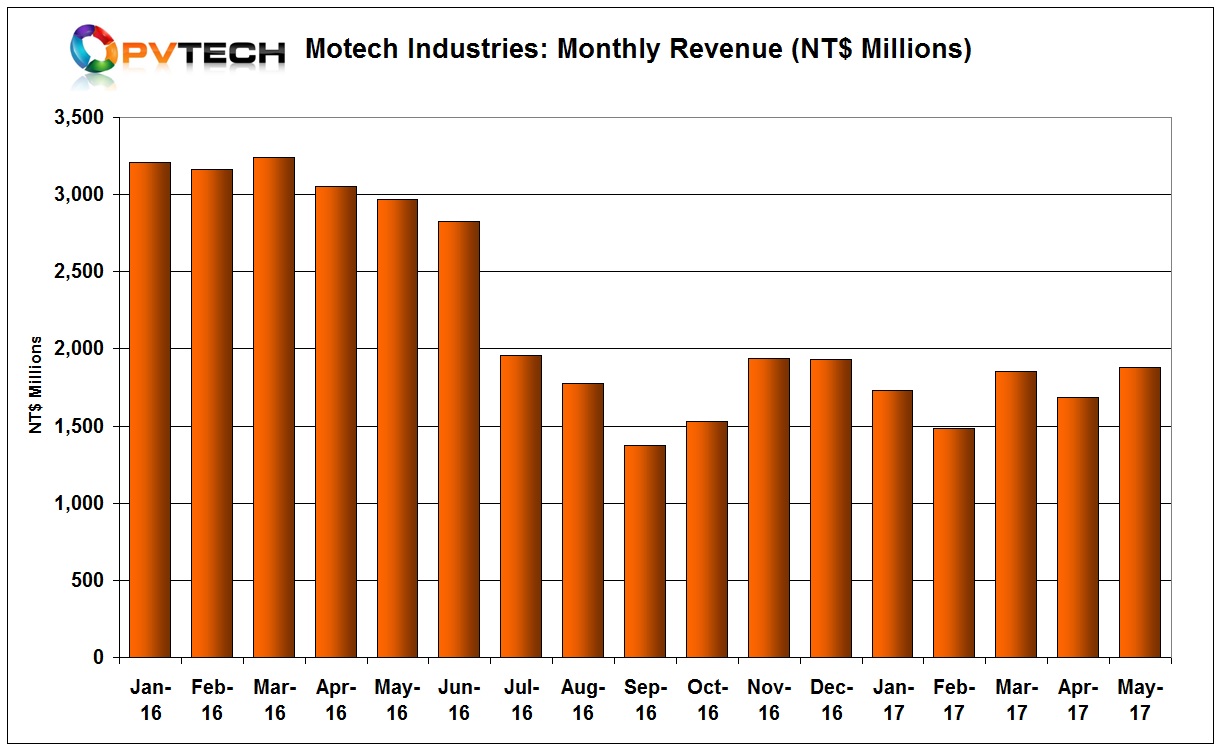 Multicrystalline wafer producer Green Energy Technology (GET) sales have continued to trend moderately upwards since the beginning of 2017.

GET noted that the revenue increase was primarily due to wafer ASP’s increasing as well as a shortage of high-efficiency wafers that continued in the first weeks of June. 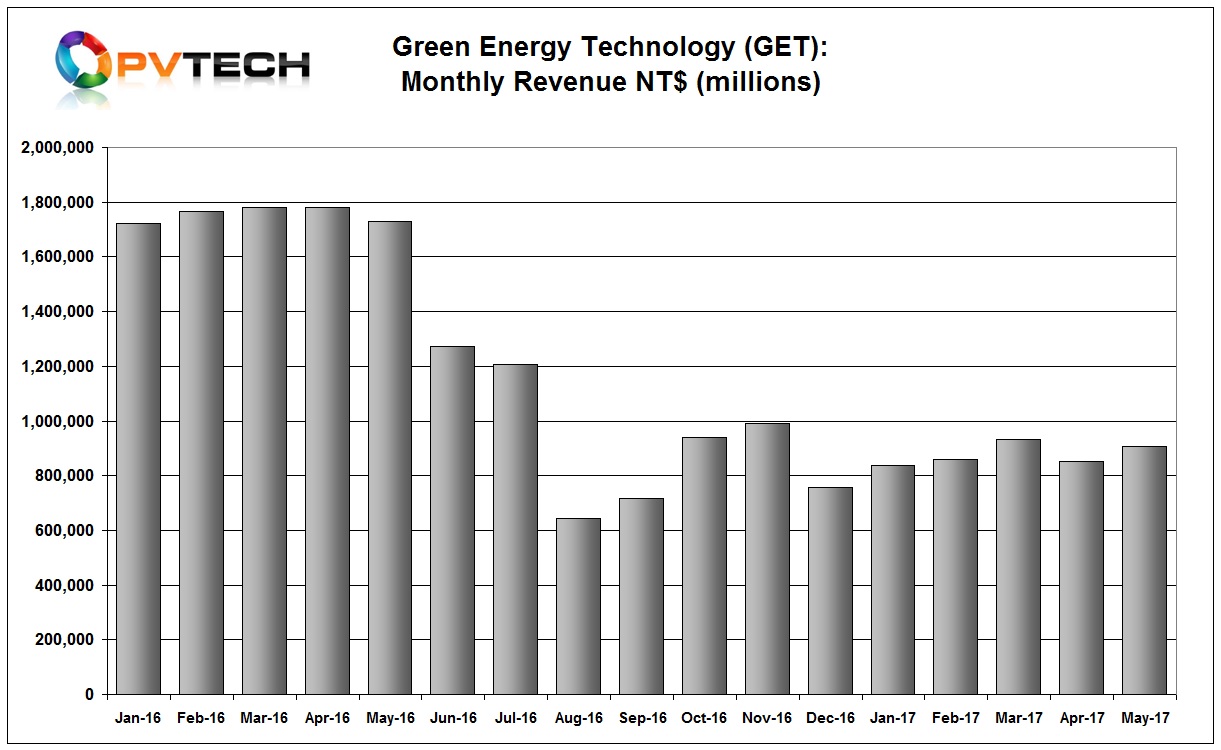 Integrated PV manufacturer Sino-American Silicon (SAS) revenue has yet to recover from a peak in March, 2017.

SAS revenue in May 2017 reached NT$4,530 million (US$149.3 million), up almost 5% from the previous month. Revenue is up over 81% from the prior year period, due to the acquisition of SunEdison Semiconductor and amalgamated revenue since December, 2016. 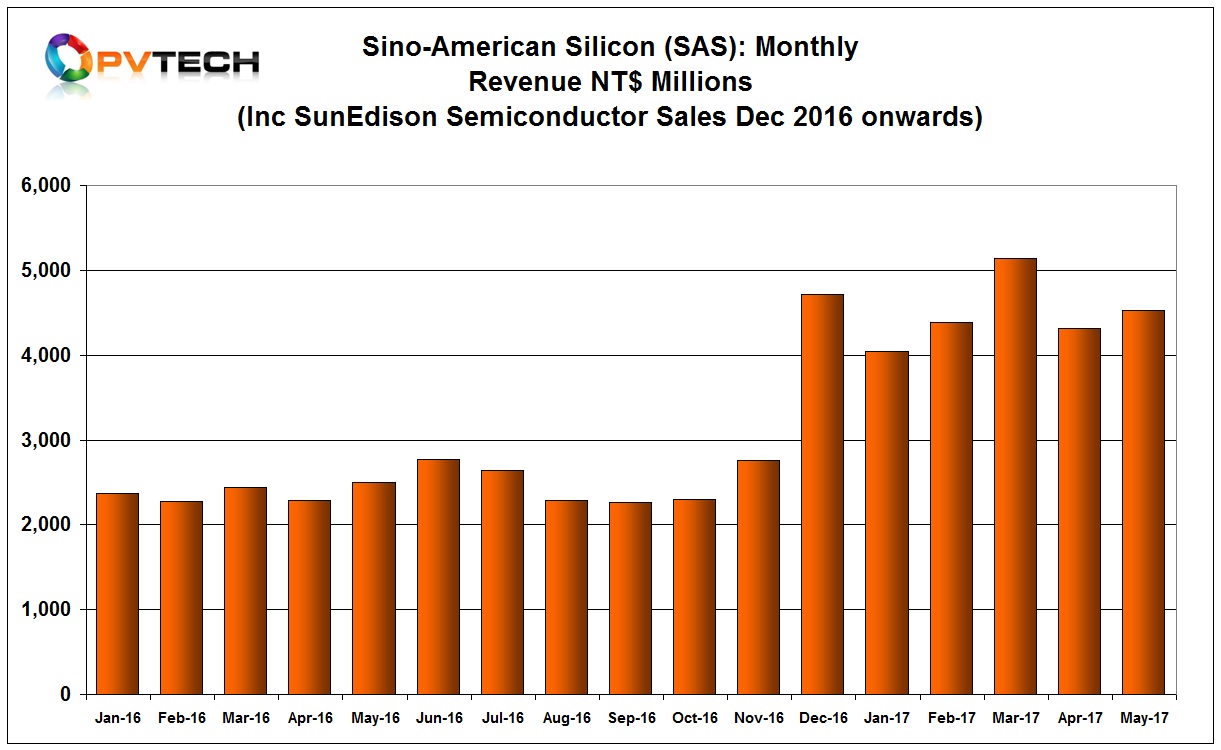 GigaSolar reported revenue of NT$ 866 million (US$28.5 million), up almost 30% from the previous month. However, revenue is still down around 35% from the prior year period. 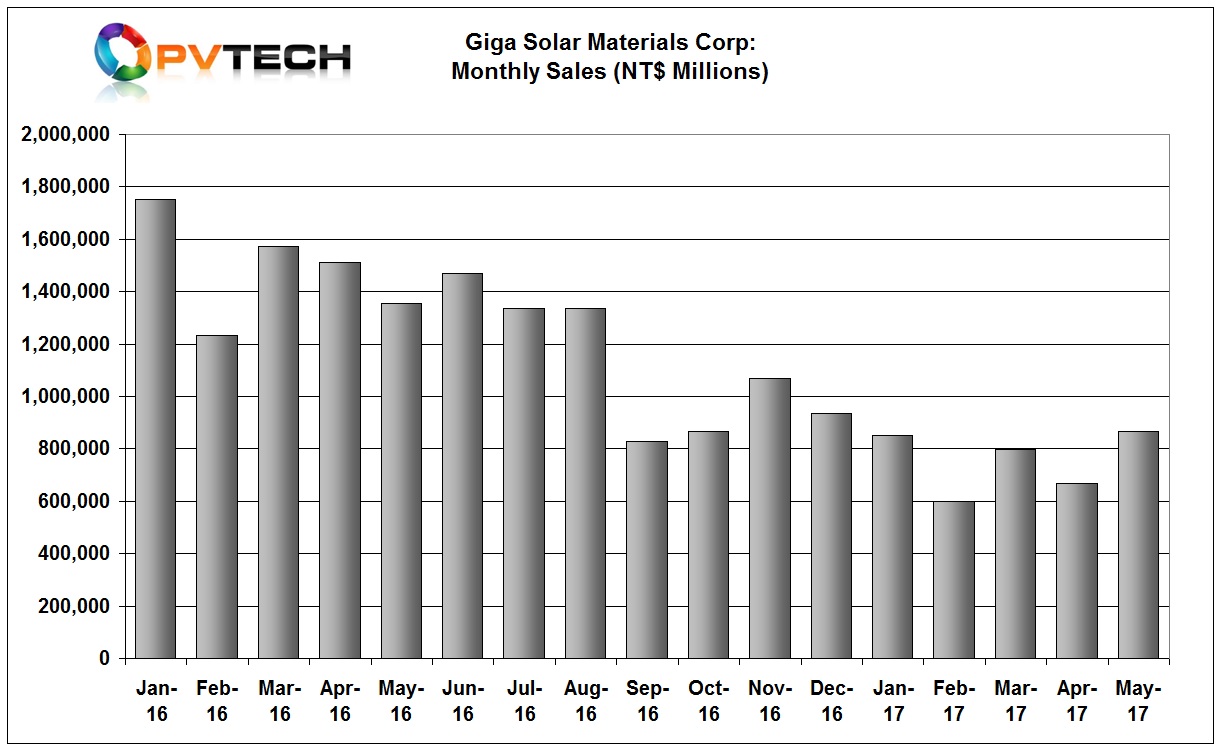 PV cell and module manufacturer TSEC Corporation reported a strong upswing in revenue for May, after dipping strongly in the previous month.

Revenue has trended around 20% below the same period of 2016. 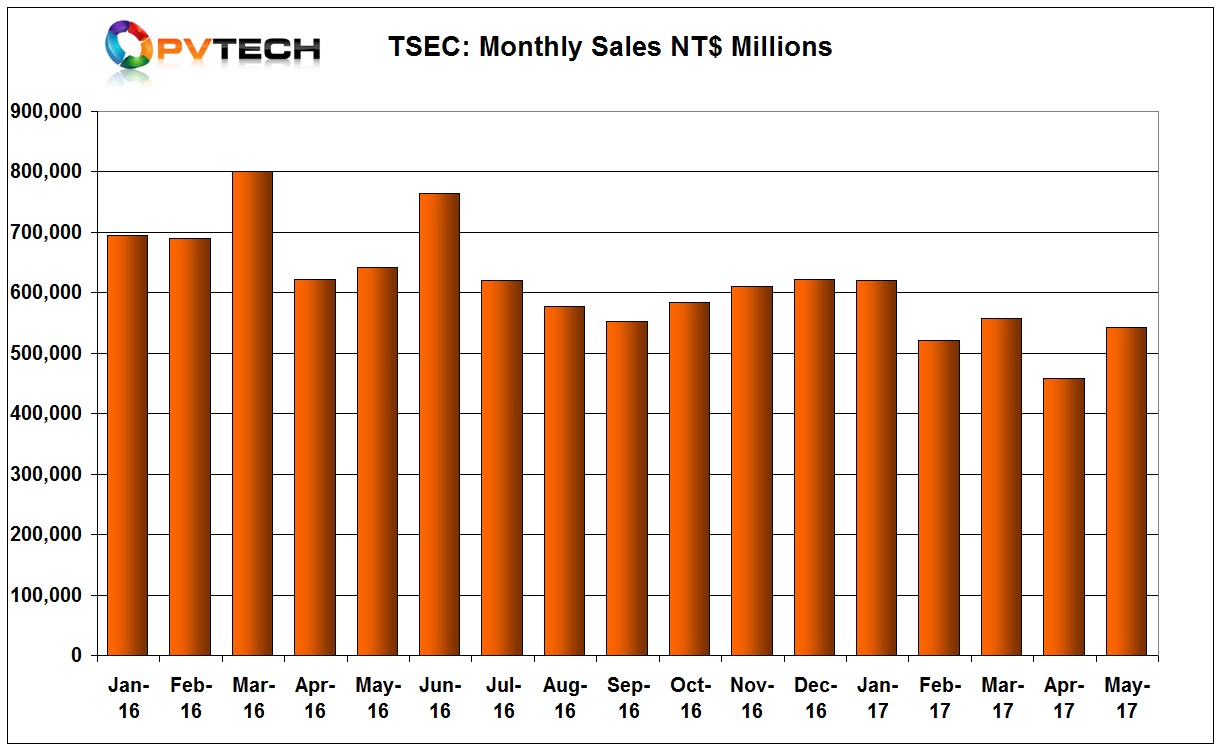 Mono and multicrystalline solar cell producer E-Ton Solar Tech reported a rebound in revenue for May 2017. 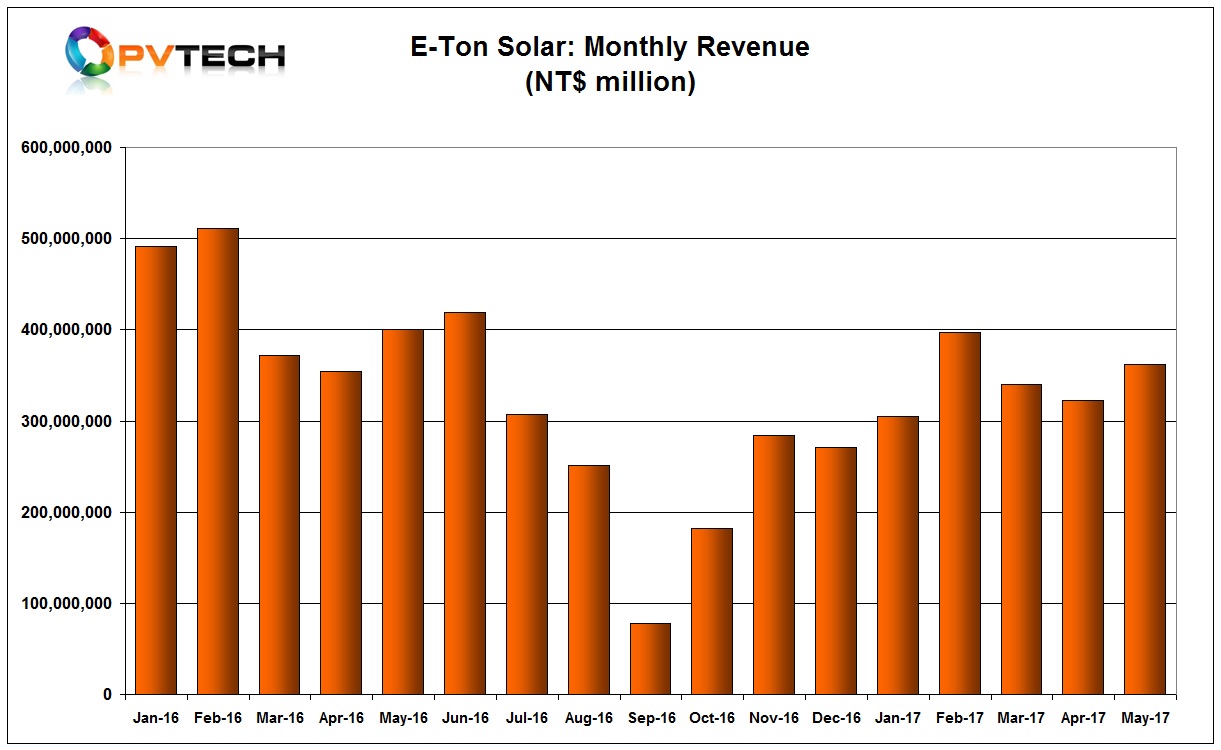