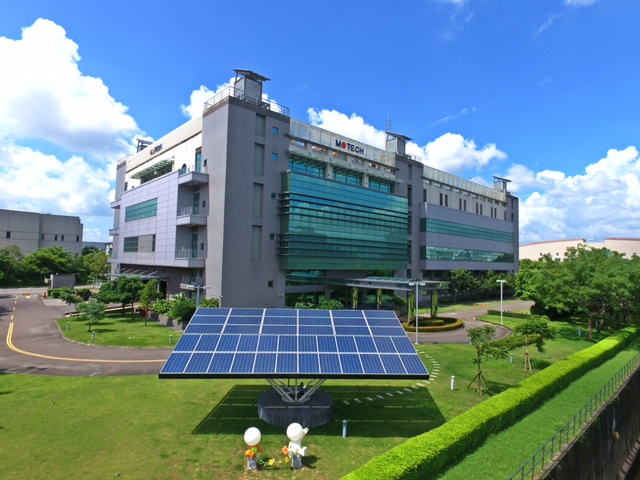 The majority of Taiwanese solar industry companies that are publically listed have recently reported December, 2017 sales figures, highlighting how elusive the recovery in sales has been in 2017.

Pressure on average selling prices (ASP’s) and increased competition from China-based merchant sell and module suppliers as well as the growing shift to monocrystalline wafers left many Taiwan companies coming to terms with weaker demand.

Confronted with a number of negative market dynamics, a group of suppliers announced plans to make a mega merger to cut operating costs, pool financial resources and increase downstream business opportunities in the Taiwan market, which could see significant growth in 2018, offsetting China’s greater dependence on its own supply chain as its domestic market exceeded 50GW of installations and potentially meet and beat that figure again in 2018.

Despite the challenging year, many companies closed the gap on lost sales from 2016, setting the stage for further recovery, not least should the domestic market take-off in 2018.

Motech’s sales in December were NT$2,099 million, up only 2% from the previous month. Sales were almost 22% down year-on-year. The underlying monthly trend was a narrowing of the sales gap with the previous year’s monthly sales.

Motech reported fourth quarter and third quarter sales that were better than in 2016. However, the company experienced a significant gap (almost 50%) in the first half of the year with sales in the prior year. Fourth quarter 2017 sales were around NT$ 6.25 billion, down 0.22% from the third quarter.

Motech has also reported in early January, 2018 that it had secured a syndicated bank loan valued at around NT$ 4.8 billion (US$161 million). 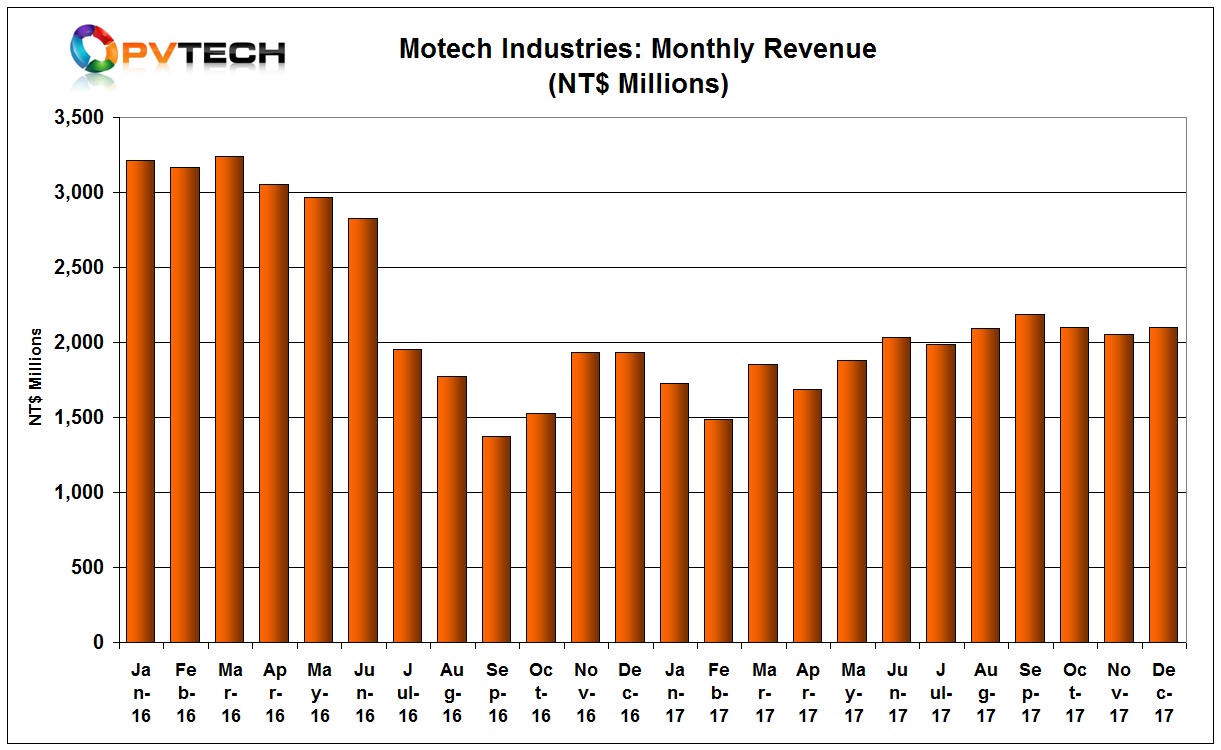 Merchant solar cell and module producer Gintech Energy was almost able to maintain sales above the NT$1.3 million level on a monthly basis in the fourth quarter of 2017.

Gintech reported December sales of NT$1,300 million, up 3.1% from the previous month and only 2.5% down from the prior year period. The sequential month sales gap decrease from over a 36% decline year-on-year in January. 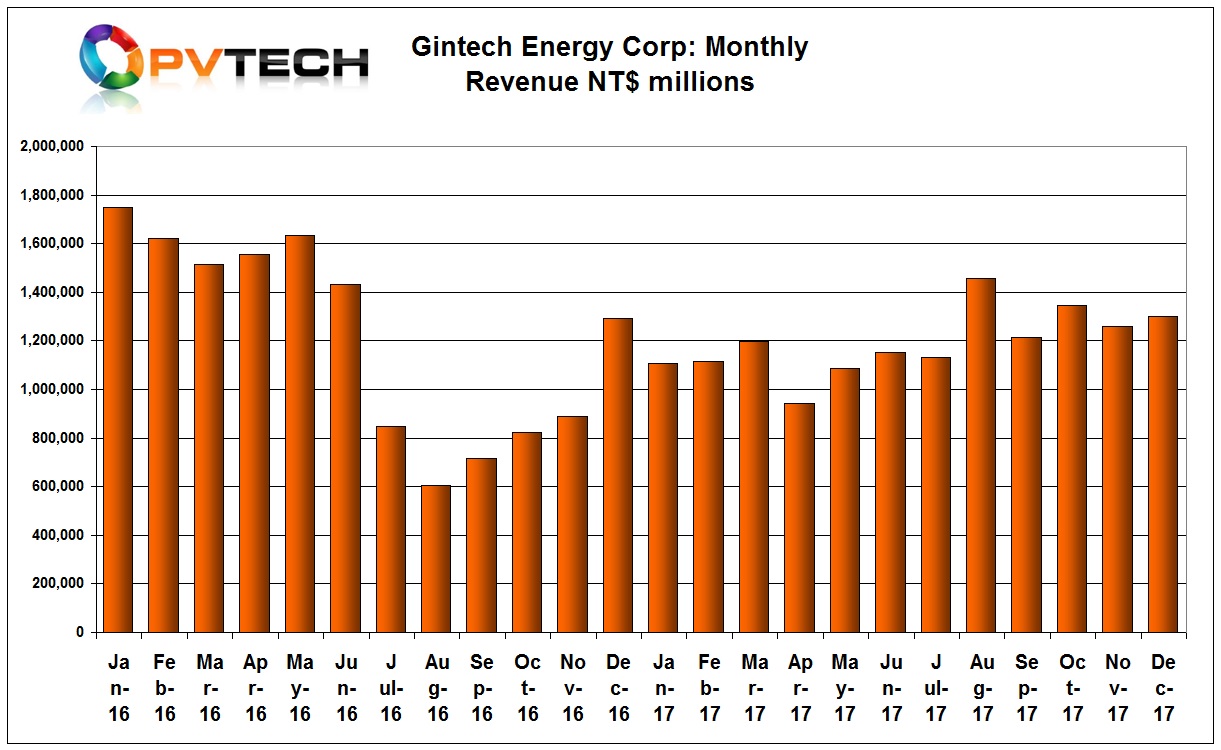 Taiwan-based merchant solar cell and module producer Neo Solar Power (NSP) was able to hold sales above the NT$ 1,000 million mark in the fourth quarter of 2017, a significant improvement over sale in the previous quarters.

NSP reported December sale sales of NT 1,058 million, down 4.71% from the previous month. 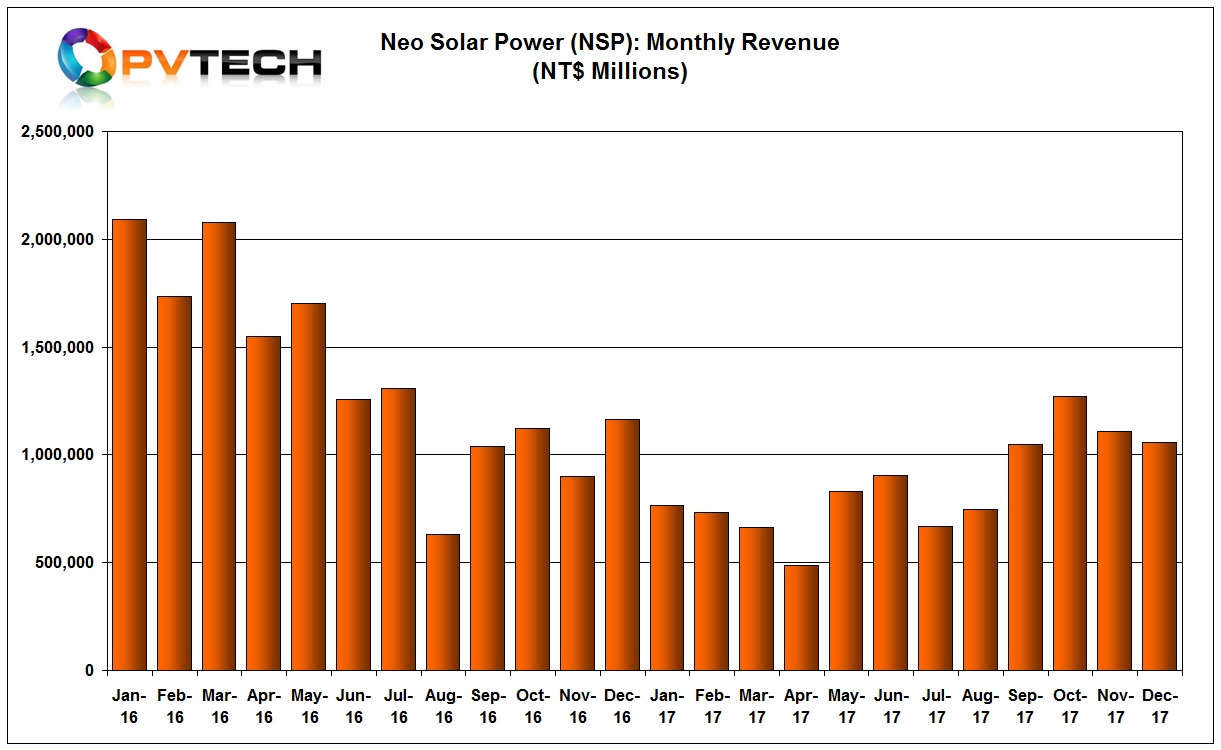 Merchant solar cell producer Solartech Energy Corp experienced a rollercoaster sales ride in the fourth quarter of 2017. Sales peaked in June and have fluctuated through the second half of the year.

Solartech reported December sales of NT$ 465 million, up 28.75% from the previous month and down 6.65% from the prior year period. The company cut the monthly sales gap by around 50% by the end of the year but sales were down almost 35% year-on-year.

Full-year sales were around NT$6,282 million. 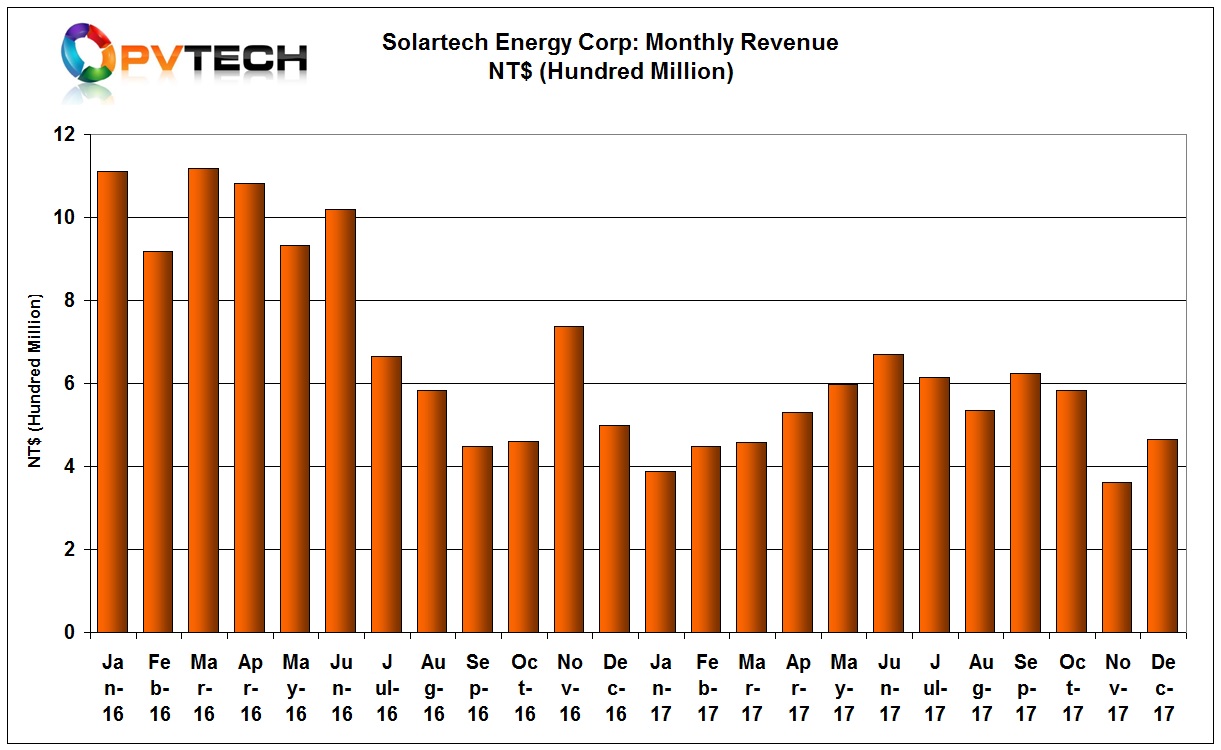 PV cell and module manufacturer TSEC Corporation sales rapidly declined in the fourth quarter of 2017, reaching a year low in December, after peaking in October. 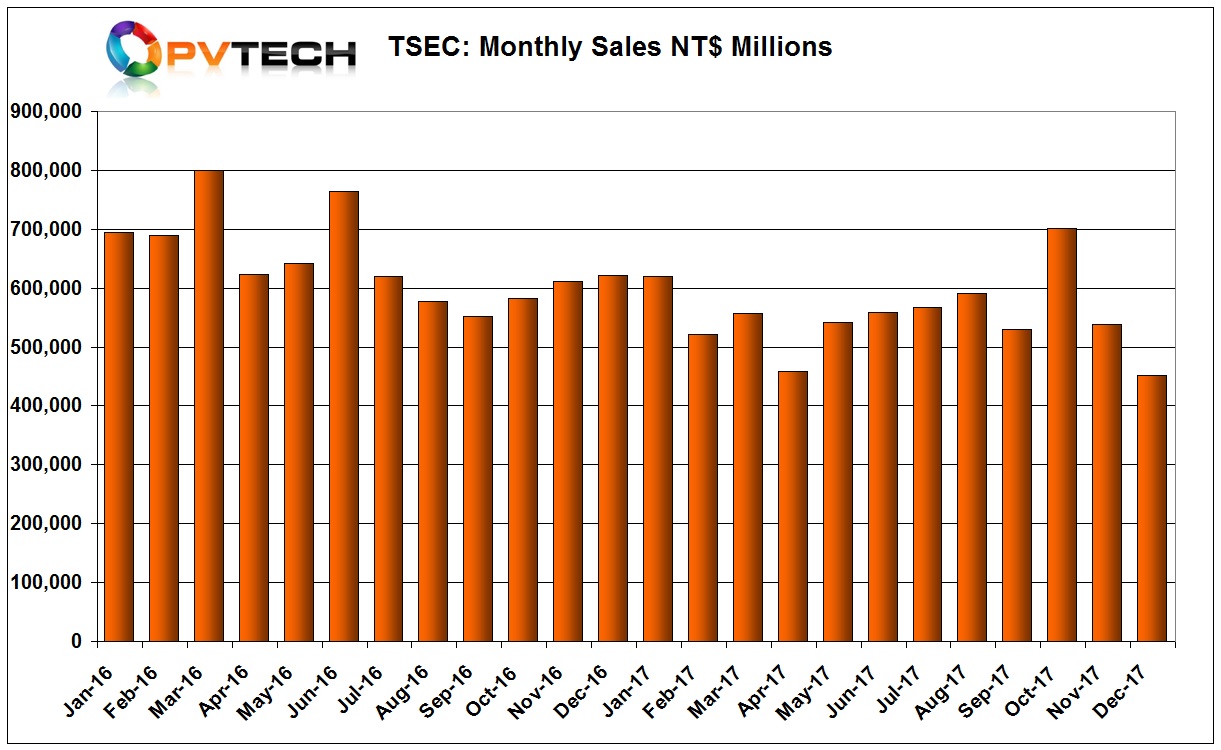 Integrated PV and wafer manufacturer Sino-American Silicon (SAS) sales remained relatively static above the NT$ 5,000 million mark on a monthly basis in the fourth quarter of 2017, having peaked in September. 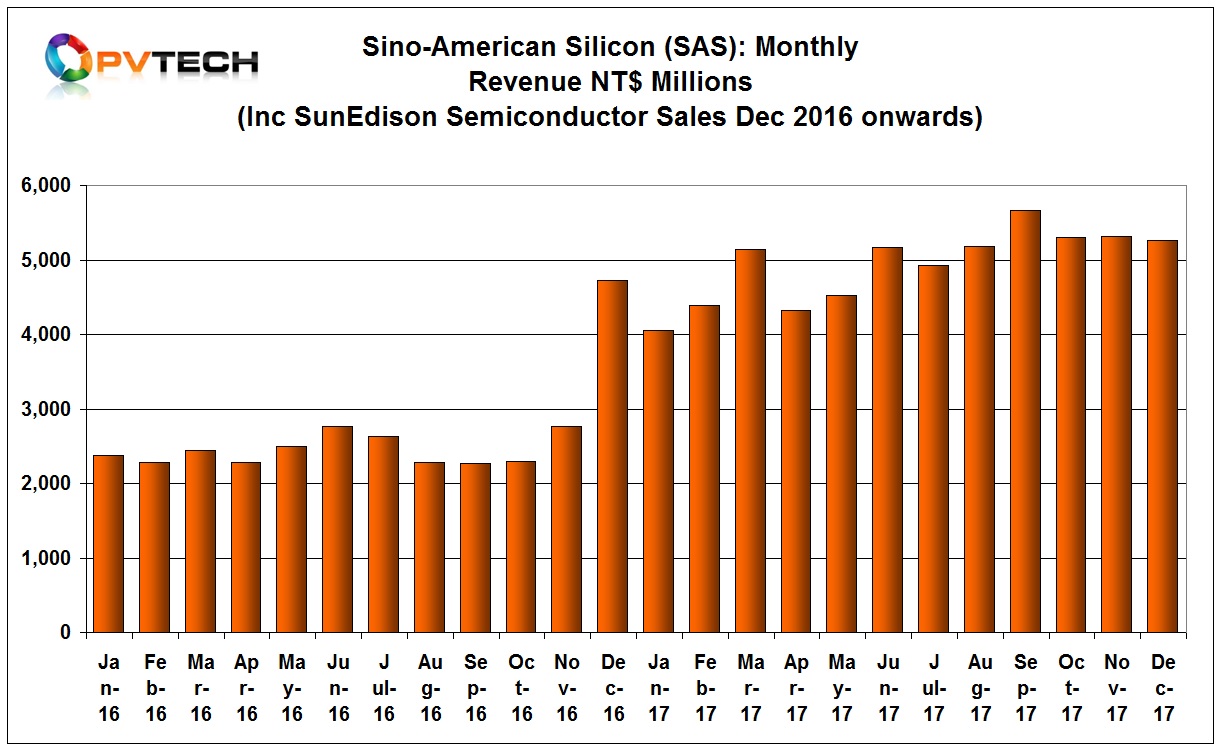 Taiwan-based multicrystalline wafer producer Green Energy Technology (GET) sales peaked in November but reported a stronger second half year than in the prior year period. 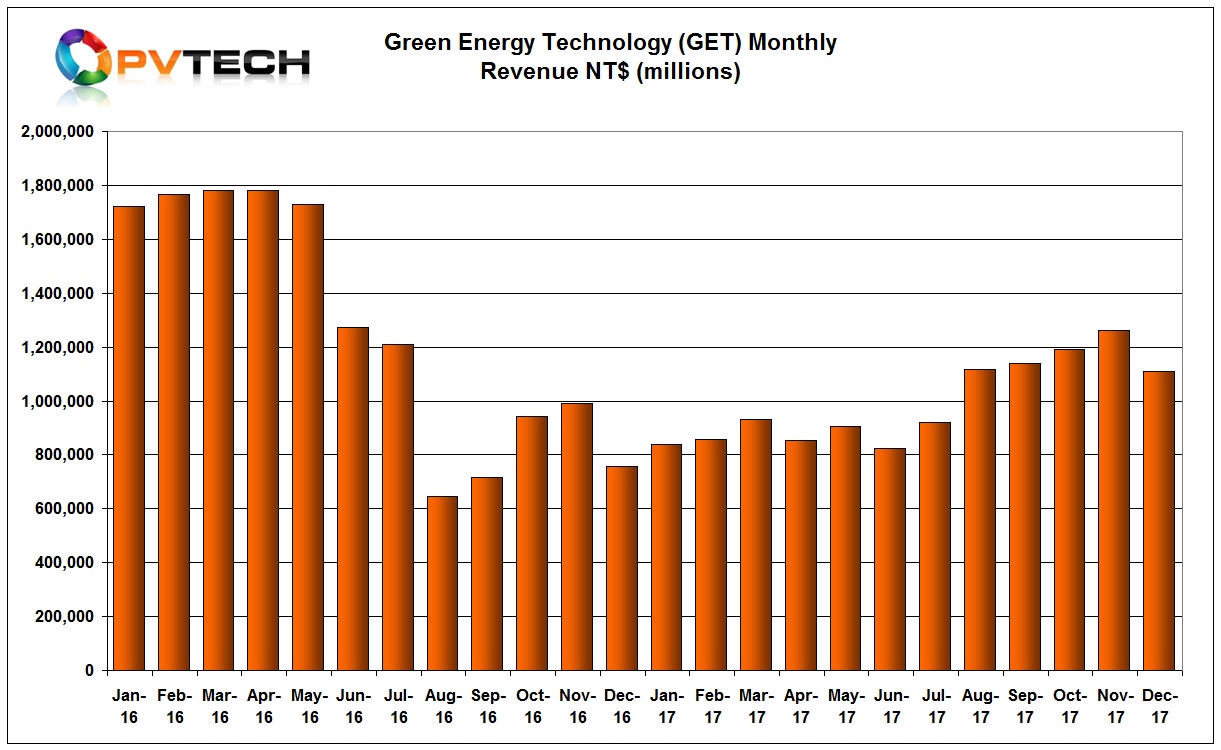 Mono and multicrystalline solar cell producer E-Ton Solar Tech experienced its lowest sales for the year in November and December, 2017. Monthly sales peaked in July and hit a low in November.

E-Ton had sales of NT$ 305 million in December, compared to NT$295 million in the previous month. 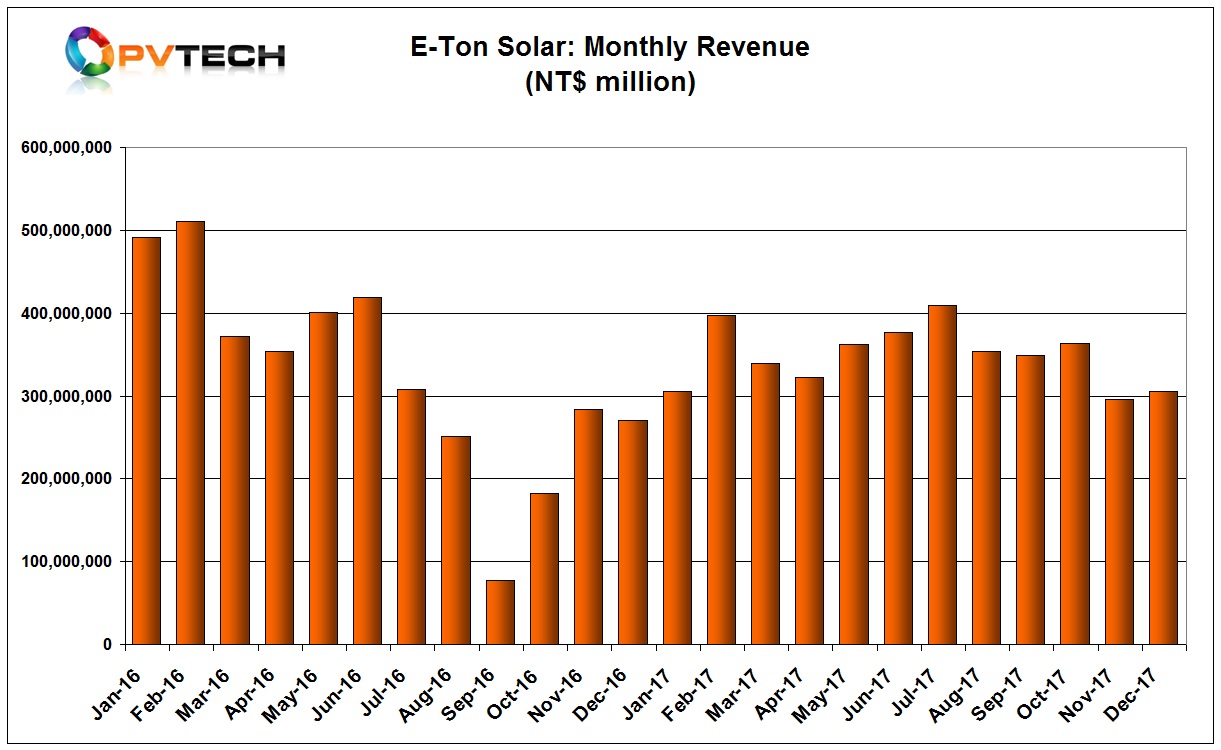 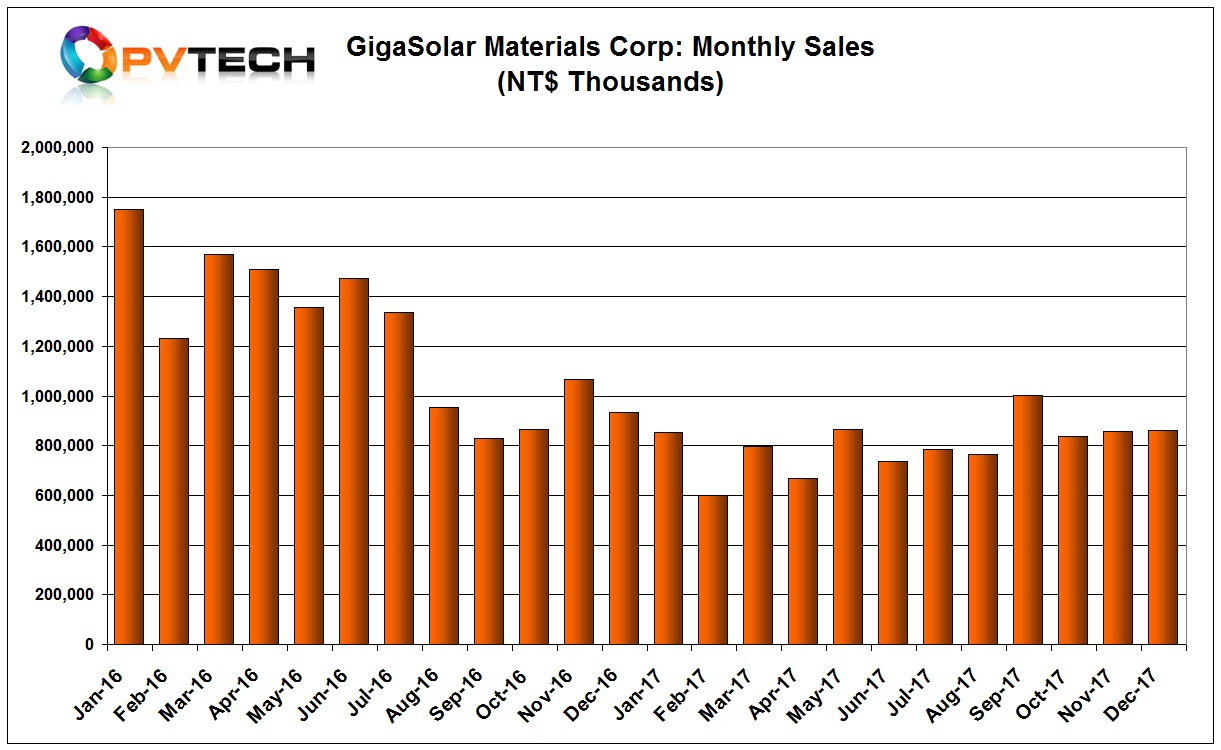