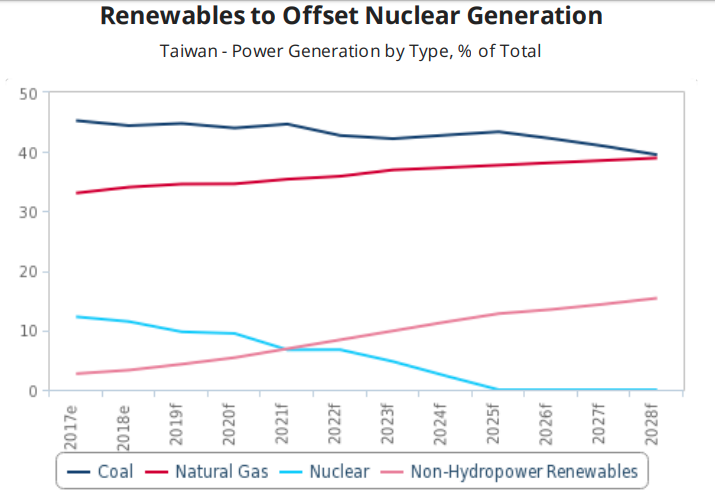 Taiwan is expected to become one of the fastest-growing solar markets worldwide despite this year’s feed-in tariff (FiT) reductions, according to a new report, but a local developer has challenged the document's conclusions about the impacts of global PV module supply.

The publication from analyst firm Fitch Solutions said that local developers would be able to capitalise on a solar equipment supply glut from China. However, Andy Tang, chairman of New Green Power, told PV Tech that Taiwanese firms are tending to buy from domestic suppliers instead.

Taiwanese regulations restrict developers from buying modules made in China, said Tang, however, this does not apply to modules made by Chinese firms in other countries like Thailand and Malaysia in Southeast Asia. Nonetheless, using locally-made modules that have a Voluntary Product Certification (VPC) gives developers access to an additional 6% bonus to their feed-in tariff (FiT).

The VPC is awarded to high-efficiency cells and modules in Taiwan via a testing regime.

“Most Taiwanese investors are willing to use VPC modules, which are made in Taiwan at the moment even though offshore products are way cheaper – US$6-7 cents lower or even US$8 cents lower – they are still willing to use from Taiwan.”

Fitch Solutions’ report said that module overcapacity in China, caused by solar tariffs brought in by the major demand markets of India and the US, will continue to put downward pressure on PV pricing worldwide, as it has done over the last two years already.

It claimed that this has given Taiwan greater access to cheaper equipment and therefore improved conditions in which to develop solar projects. Tang agreed that import prices from Southeast Asia will see a decrease, but repeated that most projects in Taiwan use locally sourced equipment.

In terms of numbers, Taiwan plans to deploy another 3.7GW of solar by the end of next year under its PV promotion plan for 2019-2020. This follows a bumper September 2019, which included the switching-on of a 70MW solar project by Vena Energy and generation from PV reaching an all-time high in the country, Fitch stated in its report.

Although investor interest in both offshore wind and solar power was negatively impacted slightly by the cut in FiT rates earlier this year, Fitch believes that this will be offset by the falling technology costs. This would then allow Taiwan’s non-hydro renewables outlook to remain bright with 21GW to be installed over the next decade up to 2028.

Andy Tang's forecast was similar: “The market here is growing very fast and we believe next year is around 2GW [deployment] at least.”

Fitch Solutions analysts claimed that the current government’s focus on eliminating nuclear power will remain strong despite some level of public support for the technology. This willpower will, in turn, pave the way for solar and offshore wind.

“This is reinforced by our Country Risk team’s view that incumbent President Tsai Ingwen, who has reaffirmed her opposition to nuclear power, will retain her presidency in the upcoming January 2020 General Elections,” the report stated.

Global experts are set to gather in Taipei for Energy Taiwan 2019 in less than a month to take stock of the island’s strengths and challenges as it embarks on a multi-gigawatt renewable transformation by 2025.