Following an extensive research process over the past couple of weeks, we can now reveal the top-10 module suppliers (by shipment volumes) for the calendar year 2017.

The final listing – and the underlying numbers – confirms the trends of recent years and the continued dominance of our self-penned Silicon Module Super League (SMSL) group.

This article shows the relative rankings of the top 10 module suppliers, and discusses the implications in terms of 100GW-plus annual deployment, further trade-related barriers in 2018/2019, and whether we have reached a tipping point where having anything less than multi-GW levels of supply will soon become a thing of the past.

Module supply is based on shipment volumes, to both in-house projects and third-party sales. It includes modules manufactured in-house by the respective companies and product that is produced under supply arrangement by OEM/contract manufacturers and subsequently rebranded by the final module supplier/seller.

Supply is based on factory-gate shipment, independent of downstream inventory levels that routinely fluctuate these days on a country-by-country level, influenced by specific interconnection tariff adjustment deadlines and trade-case based timelines for importing.

The full analysis therefore requires much more understanding of company operations, the share of internal modules to project businesses (or pure play EPC work), and the levels to which, for example, companies in Southeast Asia have been utilized for non-Chinese based module assembly.

Compared to a few years ago also, fewer companies are reporting total module shipments, or failing to reveal how much third-party module supply is being used in downstream projects. This also requires a more traditional market-research effort, than simply reading off sporadic and unsubstantiated module data coming out from the companies at random times.

However, despite all this, the top-10 listing has become a relatively simple exercise this year, owing to the fairly significant gaps in shipments between the relative suppliers; any final adjustments at the ±200MW level that end up being reported in March filings are unlikely to make any difference to the rankings.

We have further cross-checked our data with a range of credible industry sources and believe that our listing represents the most accurate and correct picture of leading module supply volumes and rankings for 2017, despite the fact we are just two weeks into 2018 now. Any minor amendments will be discussed on PV-Tech, should they alter any of the data behind this feature. 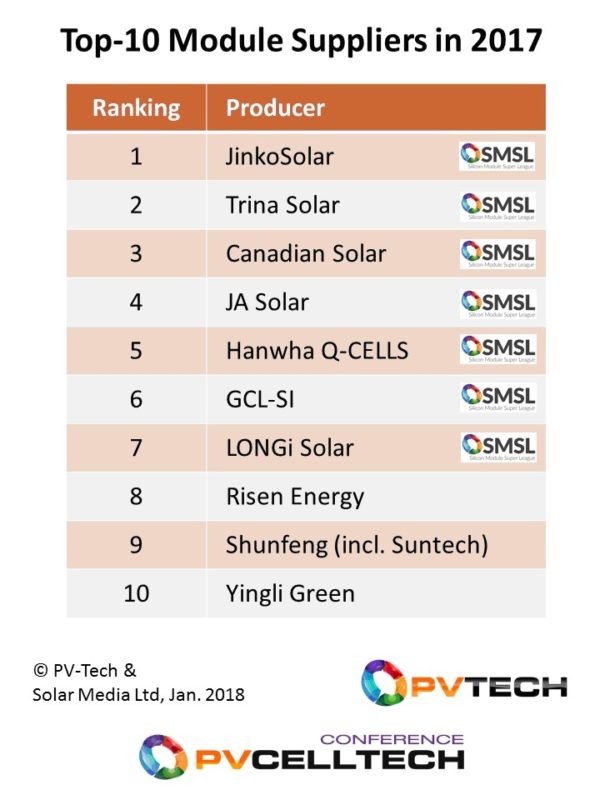 Shown also are the seven companies we identified in the past 12-18 months as the companies that we expected to be in the 4GW+ annual shipment level during 2017, forming the exclusive grouping we named as the Silicon Module Super League (SMSL).

Our forecast, methodology and selection of companies (making up the SMSL) have proven 100% accurate in this respect.

Indeed, only the top seven companies shown (all SMSL members) shipped in excess of 4GW each during 2017. It begs the question of whether we do indeed need to set the GW marker higher next year for the SMSL, or increase the number of companies included. We will review this in the coming months as we forecast in greater detail what is likely to unfold for module supply during 2018.

The main reason we segmented the SMSL companies was done so we could analyse the tactics, technologies, cost, pricing, etc. for this specific grouping, as the benchmark for all the other module suppliers in the industry. The importance of this is likely to only increase during 2018 and beyond.

More China-centric than ever – so much for trade cases!

In 2017, the Chinese company contributions to the top 10 module suppliers ranking were greater than ever seen before in the PV industry. Nine of the 10 companies are Chinese run operations, with only Hanwha Q-CELLS offering any non-Chinese elements.

Hanwha of course made its meaningful entry into the PV industry a number of years ago by acquiring Solarfun (Chinese), prior to the acquisition of Q-CELLS, rebranding to Hanwha Q-CELLS, and subsequently setting up GW-based cell/module operations in China, Malaysia and South Korea.

The 90%-plus dominance then of Chinese run companies in the top 10 for 2017 should beg the obvious question: why? Or how, given we have trade cases impacting major overseas markets, such as Europe, the US, and (start/stop) within India.

There are two reasons to explain this.

First, most of the top 10 module suppliers have company-run operations in Southeast Asia (Malaysia, Thailand and Vietnam) or have OEM arrangements with China-financed operations in Vietnam. Alone, this overcomes both European and US legacy import restrictions.

However, the other major reason is the China market, and the fact that only Chinese module manufacturers play in this segment. When this one country is accounting for more than 50% of global module shipments, it does not take a rocket scientist to conclude that multi-GW Chinese cell/module makers will be all over any global top 10 ranking for 2017 (and 2018).

Although there are many similarities in the companies within the top 10 ranking table – compounded by the fact that nine are Chinese run operations – the top 3 form an exclusive top-tier ranking that is differentiated from every other module supplier globally.

In the past three years, JinkoSolar, Trina Solar and Canadian Solar have been the top 3 module suppliers to the solar industry and by some margin. These companies offer something that no other module suppliers have today: global brand recognition.

Indeed, with China more than half the global end-market for module supply, the leading global suppliers are by default Chinese, since the prospects of a non-Chinese produced module supplier having any meaningful sales in China are almost zero.

Therefore, JinkoSolar, Trina Solar and Canadian Solar can be regarded today as the three companies that are truly driving global sales into all the key end-markets, with established sales and marketing channels that remain the envy of most challenging competitors, in particular other Chinese suppliers. They set the benchmarks for all other Asian PV module suppliers, including the other companies in the top 10 listing above.

Is consolidation a factor yet?

Every year, the topic of consolidation comes up. And each time, the answer is a resounding ‘no’. Indeed, this can be seen in 2017 again.

Yes, the top 10 module suppliers shipped more than 57GW in 2017, approaching a share of almost 60%, above the levels seen from the top 10 in recent years. But this should not be confused with consolidation in the number of companies offering modules to the industry.

The past two years has seen many more companies enter the industry (as prospective GW-level module suppliers) than companies that have exited the industry (through insolvency or acquisition). Going into 2018, we still see new entrants, in particular in China, stimulated by domestic drivers to create high-efficiency platforms based on n-type architectures, or sub-GW cell/module producers in China accessing funds to move to the multi-GW level.

If the industry’s 2018 deployment is to be shaped by module shipment growth within China (uncapped), then the prospects of 60GW-plus being shipped in China is highly likely, as part of global supply this year that approaches the 120GW mark.

Companies no longer in the top 10

Being a top 10 module supplier these days excludes anyone not at the 3GW level. By default, this rules out many of the companies that have GW-level share outside China and appear to the outside world as top 10 type entities.

Companies that have featured in the top 10 listings of recent years, but are now well below the 10GW marker from the top of the leaderboard include: First Solar, Renesola, Sharp, and SunPower. Of these companies, only First Solar has a roadmap to strongly increase module shipments in the next few years.

Last year, we featured a non-China (end-market) top 10 ranking table for module supply. The case for this in 2017/2018 is equally valid, with companies such as First Solar, SunPower, and REC Solar (in particular) seeing an addressable market these days that is 50% of the global market, or less if you remove the ASP-depressed Indian market. This exercise will take more time to conclude, and we will cover this on PV-Tech in detail once the final data is obtained by our research team.

Looking at 2018 forecasts across the industry, the top 10 module supplier listing for this year is likely to consist of the same ten companies making up the 2017 ranking list. Much of this is coming from the continued growth in China, with the industry as a whole in 2018 looking remarkably like 2017, from a China versus non-China shipment landscape.

The main difference this year however will be the technology mix making up the likely 120GW of production, in particular what 60GW may look like in China, and how much of this will come from n-type capacity being ramped up today.

We continue to monitor the rapid shift to multi-PERC, completing diamond-wire sawing on multi lines, a greater number of half-cut cell designs, and more glass/glass and bifacial variants: this is all happening now, and many of these will simply drive mainstream module supply going into 2019.

The wildcard for 2018 is all about n-type, and China action. This is what will make 2018 different to 2017, regardless of the success of the new n-type GW factories being ramped up. While some of the noises may sound similar to those being voiced ahead of failed thin-film plans of the past, the difference here is that we are c-Si based (with potential n-type wafer supply available if needed) and the end-goal is efficiency (not cost) driven. Furthermore, the China operations would appear to be government, state and investor backed.

Several GW of heterojunction capacity in China at the start of 2019 certainly has the scope to be disruptive, from polysilicon consumption through to p-type PERC upgrade potential. The risk in ignoring today is simply too high.

The third PV CellTech conference takes place on 13-14 March 2018, in Penang, Malaysia, and the agenda has been configured specifically to address what to expect from cell technology in a 120GW production landscape, and where p-type and n-type mass production metrics are moving in the next 12-18 months.

A major part of this includes hearing from the n-type action in China today, benchmarking against p-multi and p-mono advances. The agenda features the leading multi-GW cell producers to the industry today, key equipment and material suppliers, and the research institutes driving current technology-transfer projects in the factories across China.

To take part in the event or to attend the two day conference, please follow the links at the event website here.