There are many key metrics worth listing at the end of each year in the solar industry. In terms of the upstream/manufacturing side, two jump out as leading indicators for the year ahead.
The first is to rank the top-10 producers of the solar cells during the year.

These are the companies that actually make all the solar cells that are the most important part of any solar installation. The second ranking of note is the top-10 module suppliers. These are the companies that shipped the assembled modules to the end-market, either making the cells and assembling the modules themselves or outsourcing all or part of the cells and modules.

This article shows the top-10 cell producers of 2016. Tomorrow on PV-Tech, we will have a feature on the top-10 module suppliers of 2016. Leading also into the PV CellTech conference in Penang, Malaysia, 14-15 March 2017, it is worth noting that the CEOs and head of R&D from more than two-thirds of the top fifteen companies will be presenting at this flagship event.

Knowing who made the solar cells that are contained within the modules installed on rooftops or utility scale projects is a topic that the solar industry collectively has been brushing under the carpet for some years. In fact, in recent years, the issue has become much more pertinent, and it remains a surprise that the few companies that truly use all their own in-house production sites to make the cells and the modules are not making this a hugely differentiated marketing tactic.

Before the days of anti-dumping duties to the US and Europe, it was generally known that contracted cell production was done routinely in China, and of course this continues today. When it became essential to have cells and modules made outside China and Taiwan, the use of third-parties to make the cells became much more commonplace. The recent growth of cell production in Vietnam is just one of several reference points here that exemplifies this point.

The somewhat lack of internal control then went to another level, when many of the Chinese companies entered into the project development phase, creating parallel divisions that would finance projects from shovel-ready stage, undertake the EPC and do some form of (generally outsourced) O&M work post-build.

When looking at the modules used by these companies, it is not uncommon to see the sites built using modules supplied by companies that ought to be their competitors. Often, this is a purely financial decision, as most of the major downstream integrated manufacturers can get more money from selling their own modules than the cost of buying in modules from lower-standing module competitors.

The net result of this is a chunk of PV installed in the past few years, where the scrutiny on quality of component and related audit checks is surely compromised.

Therefore, knowing who makes the cells is probably more important today than ever before, for homeowner and portfolio owner alike.

The top-10 list is based on the ongoing work by our in-house research team at PV-Tech’s parent company Solar Media Ltd., where we track in-house and third-party supply across the value-chain of all the major companies in the industry today.

The full set of findings is included in the January 2017 release of our PV Manufacturing & Technology Quarterly report. The table below shows the ranking order for the top-10 cell producers for 2016. 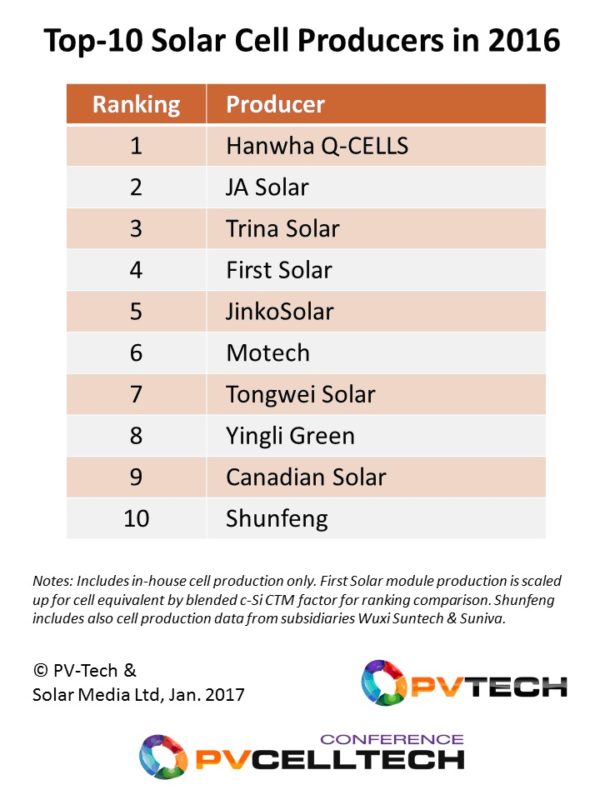 We have listed the ranking positions and not the megawatt figures from our research. This is due to the fact the numbers themselves are provisional, with full reporting still to be done for Q4’16, or revenues for the companies to be used to back out in-house production metrics.

However, there is generally a delta between most of the companies that will mean that the above ranking list is the final one. The jostling also is really in the bottom half of the table, not for the top five.

What can we learn from the companies in the top-10?

A feature on Friday last week revealed the number 1 company – Hanwha Q-CELLS – and the factors that resulted in Q-CELLS effectively climbing back to the top position globally for cell production. Therefore, we will look at some of the other key takeaways from the company listing shown above.

Eight of the companies fall into the broad category of multi-GW midstream cell/module producers, with adjacent activities in project development. Five of the seven Silicon Module Super League (SMSL) companies are included. Only one legacy pure-play cell maker is present (Motech) and only one thin-film producer, First Solar. (One could also make an argument for tagging Tongwei Solar in the same grouping as Motech, at least from an industry perspective.)

Note that we upgrade First Solar’s module production figures by a blended cell-to-module loss figure that is typical for power loss from c-Si cell to module production, so we have an accurate side-by-side comparison of ‘cell’ production in its generic form.

The top-10 is made up of a group of companies (including most of the SMSL) that have added high levels of cell capacity in the past couple of years, with Southeast Asia operations now common.
There are companies whose inclusion is largely on the back of acquiring existing cell producers, such as Shunfeng with Wuxi Suntech and Suniva.

The other notable takeaway is the absence of companies that used to be regular features of annual top-10 cell production lists in the past, such as SunPower, Kyocera, Sharp Solar and others. In fact, being a 1-GW-level cell producer today is second tier, in terms of competing with companies making up to 5GW of cells in a single year.

Underlying the broad set of data for total industry cell production for 2016 reveals another somewhat troubling issue, and only goes to highlight the initial discussion on third-party cell production.

Adding up the cell production from the top-10 in 2016, the total capacity produced is still less than 40% of the whole industry. Compare and contrast this to key component supply in the semiconductor or flat-panel industries and we get a glimpse of just how fragmented the solar industry remains. In fact, you need to extend the list of cell producers to the top-50 just to account for about 90% of the industry output.

It is notable that this is not the case with polysilicon, wafer or module supply in the PV industry. There are many factors behind this that we may cover in future articles on PV-Tech.
What will the top-10 do in cell production in 2017?

Probably the key question, aside from the rankings and megawatt volumes, relates to the question of what-next? This is a much harder issue to crack, as many of the companies are increasingly reporting less information on in-house cell production, capacity and technologies; focusing instead on reporting module shipments, group revenues and project pipelines.

This in part drove us to establish the PV CellTech conference theme, and it will be central to the agenda in the forthcoming event in Penang, Malaysia, 14-15 March 2017. Details on how to register to attend the event can be found here.