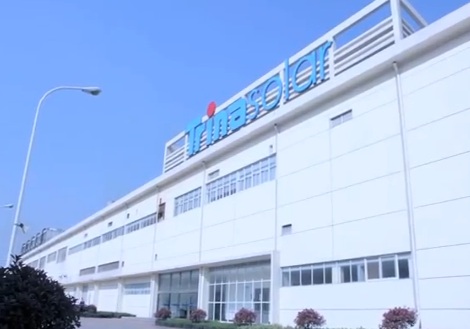 Trina Solar claimed the decrease of shipments was primarily due to the signficiant slowdown in demand in China after the subsidy policy adjustments at the end of June, 2016.

Jifan Gao, Chairman and CEO of Trina Solar stated: “Largely as expected, we had a slowdown in the third quarter as a result of an oversupply and increasing inventory levels of modules in the market, as well as weak demand in China following a strong first half of the year as developers rushed to place orders prior to a subsidy policy adjustment. As a result, our total shipments of 1.36 GW came in lower than the bottom end of our guidance.”

The significant miss in shipments could be attributed to the company not accepting ultra-low module price offers in the quarter, something SMSL rival Canadian Solar adopted in the quarter.

Trina Solar’s Gao had said in the company’s second quarter earnings call that due to the weakness in demand in China at the end of the quarter, overcapacity fears and ASP declines the company would, “remain flexible in executing our operational strategy and focus more on strengthening our financial management.”

However, the company claimed that it had maintained its leading market position in the US in the quarter and achieve record shipments to Europe, while stating that nearly 30% of shipments in the quarter went to India.

US shipments in the third quarter were 352MW, down from 418MW in the previous quarter and down from 550MW in the first quarter of 2016.

Also of significance is the fact the company has provided fourth quarter and possibly revised full-year shipment guidance in releasing third quarter results. Trina Solar had recently said it would not be holding an earnings call for its third quarter financial results, citing the impending privatisation plans.

Trina Solar had previously reiterated full-year shipments to be in the range of 6.3 GW to 6.55GW.

With the major shipment miss, Trina Solar reported third quarter revenue of US$741.1 million, which included US$60.6 million in revenues from electricity generated by its downstream solar power business and connected operations. Total net revenues in the second quarter of 2016, were US$961.6 million, a 22.9% decline from the previous quarter.

Trina Solar said that the sequential and year-over-year decreases in gross margin were mainly due to module ASP declines that occurred at a faster rate than the reduction in manufacturing costs in the quarter.

Trina Solar said that the sequential and year-over-year decreases in gross margin were mainly due to module ASP declines that occurred at a faster rate than the reduction in manufacturing costs in the quarter. 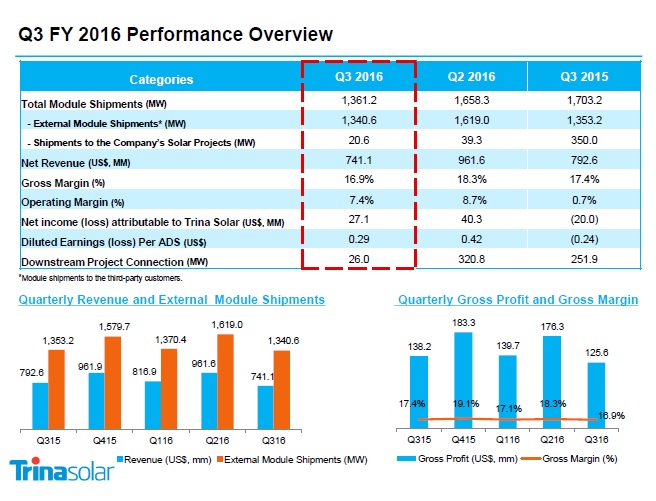 Trina Solar did not report any quarterly increase in annualized in-house manufacturing capacities in the third quarter of 2016. Therefore silicon ingot production capacity remained at 2.3GW and wafer capacity at 1.8GW. Solar cell capacity remained at around 5GW and module assembly capacity stood at 6GW.

Trina Solar reported that it had connected a total of 26MW of PV projects to the grid in China in the third quarter, including 1.4MW of utility projects and 24.6MW of DG projects. 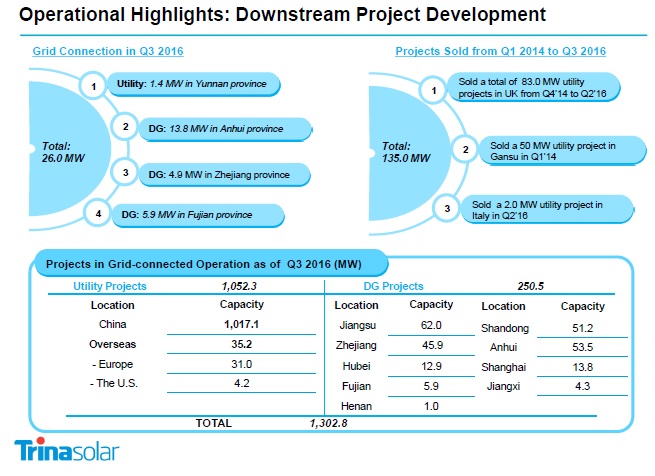