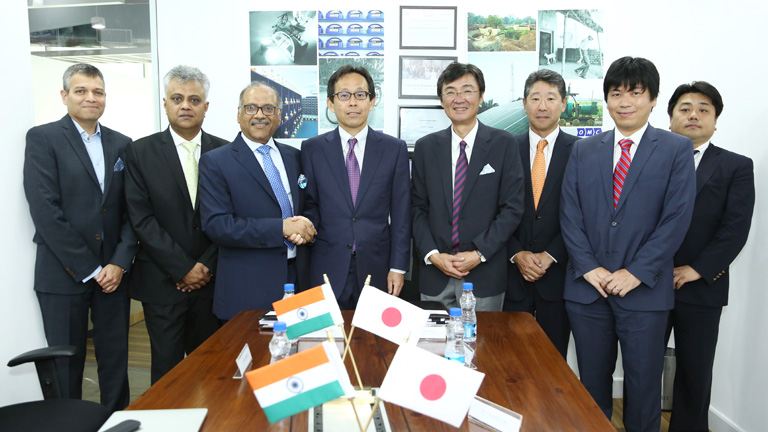 Mitsui & Co., a major Japanese industrial conglomerate, has formed a Joint Venture (JV) with leading India mini-grid developer OMC Power to expand their mini-grid business into Africa, the two companies have announced. The new JV is part of a ‎¥1 billion (US$9 million) equity investment by Mitsui in OMC Power.

Anil Raj, OMC Power founder and CEO, said that the growth capital was another important signal for the nascent mini-grid market, which has seen major European utilities such as Engie, E.ON and Enel, as well as diesel genset companies like Caterpillar increase their participation.

“The sector has been viewed with some skepticism, and rightly so, because its been hard to make money,” he added. “Mitsui’s investment is an endorsement of the sector. They looked at mini-grids for four years before investing in us. Our sector is transitioning to a phase of commercialization and scale.”

Mitsui’s project manager for ESCO Telecom Towers and Mini-grids Takao Ito said: “Until now, rural electrification was covered by fossil fuels such as diesel and kerosene, but OMC Power is more stable and has less environmental impact by combining solar power generation and batteries at a lower price, contributing not only to the development of the regional economy but also to the reduction of carbon dioxide emissions. Mitsui aims to contribute to clean, affordable rural electrification in India as well as other countries in Asia and Africa through this investment.”

Raj said he expected the capital from Mitsui to allow OMC Power to unlock significantly more debt financing, which has been a challenge for many mini-grid developers to date. OMC Power already has lines of credit from several Development Finance Institutions (DFIs), he added.

Raj said the new JV is already evaluating 5–6 countries in Africa, in the more developed eastern part of the continent as well as newer markets, and is hiring to serve those markets. “We’re pretty focused on Africa and it’s absorbing a lot of our resource,” he said.

The African market is much less densely populated than India, which means OMC Power will pursue a number of business models, including its original service providing power to telecom towers, as well as its anchor, business and community (ABC) model that uses telecom towers and other commercial loads to “anchor” service delivery to local homes and businesses. Sub-Saharan Africa has more than 600 million unelectrified people, but they are spread over nearly 50 countries. Raj said that OMC Power may also look at deploying “packaged power” in some communities, which would entail first growing local demand through home delivery and pick-up of smaller, pre-charged solar lighting products, before building a bigger mini-grid as demand grows.

OMC Power will continue to grow its mini-grid business in India, where it is part of the Smart Power India and Smart Power for Rural Development programs funded by the Rockefeller Foundation, Raj said.

The company aims to operate 1,000 mini-grids with total generation capacity of about 50MW over the medium-term, supplying electricity to more than 1 million rural unelectrified. Raj said that all OMC Power plants are profitable on an EBITDA basis.