In November, 2015 Canadian Solar announced a major expansion of solar cell capacity after falling to below 50% of in-house module assembly capacity. The driver was to reduce manufacturing costs as OEM prices were on the rise for multicrystalline cells as wafer ASPs increased on tight supply, while monocrystalline wafer and cell prices had been falling on overcapacity issues. The company was highly dependent on multi c-Si than mono.

From a recap perspective, Canadian Solar announced in November last year that it would increase in-house wafer production from 400MW to 1GW by mid-2016, while solar cell capacity would be expanded from 2.5GW currently to 3.4GW by the end of 2016, a 900MW increase.

Canadian Solar also said at the time that a new 400MW cell manufacturing plant was to be located in Southeast Asia. The plant would be commissioned in the second half of 2016, according to the company.

Total solar cell capacity would therefore reach around 3.4GW by the end of 2016, subject to any further capacity expansion announcements in subsequent quarters.

The company also said at the time that new module assembly plants would be established  in Vietnam (300MW), Indonesia 30MW and in Brazil 300MW.

However, fast forward to the first quarter of 2016 when Canadian Solar announced fourth quarter and full-year results for the previous year when the company made further tweaks to the previously announced plans.

Digging deeper, the subtle changes include its new solar cell plant in South East Asia would be ramped to 700MW beginning in the third quarter of 2016, compared to 400MW previously announced.

The new solar cell plant in South East Asia would also ramp higher in 2016. The company noted that the new plant would ramp to 500MW, rather than the previously planned 400MW.

Canadian Solar said that it expected total module shipments in 2016 to be in the range of approximately 5.4GW to 5.5GW

A total of US$297.0 million would be allocated to the expansions in 2016, according to the company.

In reporting its first quarter 2016 financial results on May 11, Canadian Solar reiterated previously guided module shipments for the year.

However, the company noted that in May, 2016 its Suzhou and Funing plants, in Jiangsu Province, currently totalled 2.2 GW and 500 MW, respectively, yet the Funing plant would have added a further 500MW of capacity by July. This would push total cell capacity to 3.2GW. Although not an accretive to the cell expansions, it highlights the pace of expansions being undertaken.

What is accretive is the fact that its new solar cell plant in South East Asia would be commissioned in the second half of 2016, but with a nameplate capacity of 700MW, compared to the previously upwardly revised 500MW.

The Company's new 700 MW cell manufacturing plant, located in South East Asia, is expected to be commissioned in the second half of 2016.

Therefore, by the end of 2016, Canadian Solar is expected to have an in-house solar cell nameplate capacity of 3.9GW.

The company said that its module capacity was expected to reach 6.43GW by the end of 2016, compared to the 5.63GW, previously guided, a further 800MW expansion.

A total of 4.7GW of module assembly capacity would be located in China by year-end, which included 3GW in Changshu and 600MW in Suzhou, Jiangsu Province, and 1.1GW in Luoyang, Henan Province.
However, Canadian Solar said in its first quarter earnings call that it took the opportunity of acquiring a former local solar cell facility that recently closed that was very close to one of its existing facilities in China, which would be converted to 500MW of extra module capacity.

There were no changes to the first wave module assembly capacity expansions located outside China in regards to the 500MW expansion in Canada, the 300MW in Vietnam and the 30MW in Indonesia and the 300MW planned in Brazil.

The difference was the new module assembly plant in South East Asia, which would have 600MW of capacity, compared to the previous 400MW, initially announced. The company would therefore reach module assembly capacity at existing and new locations outside China totalling 1.73GW at the end of 2016.

In summary, module assembly capacity under the third wave of expansions for 2016 would be expanded by around 700MW. Total module assembly nameplate capacity is therefore going to be in the range of 6.4GW to 6.6GW at year-end.

With total module shipment guidance reiterated at 5.4GW to 5.5GW in 2016, Canadian Solar said that the extra module capacity would provide flexibility to any peak monthly and quarter module demand, significantly reducing its need for purchasing modules form other producers. This would lower costs and reduce quality control issues, according to the company. Due to demand in 2015, Canadian Solar accessed around 500MW of OEM module supply. 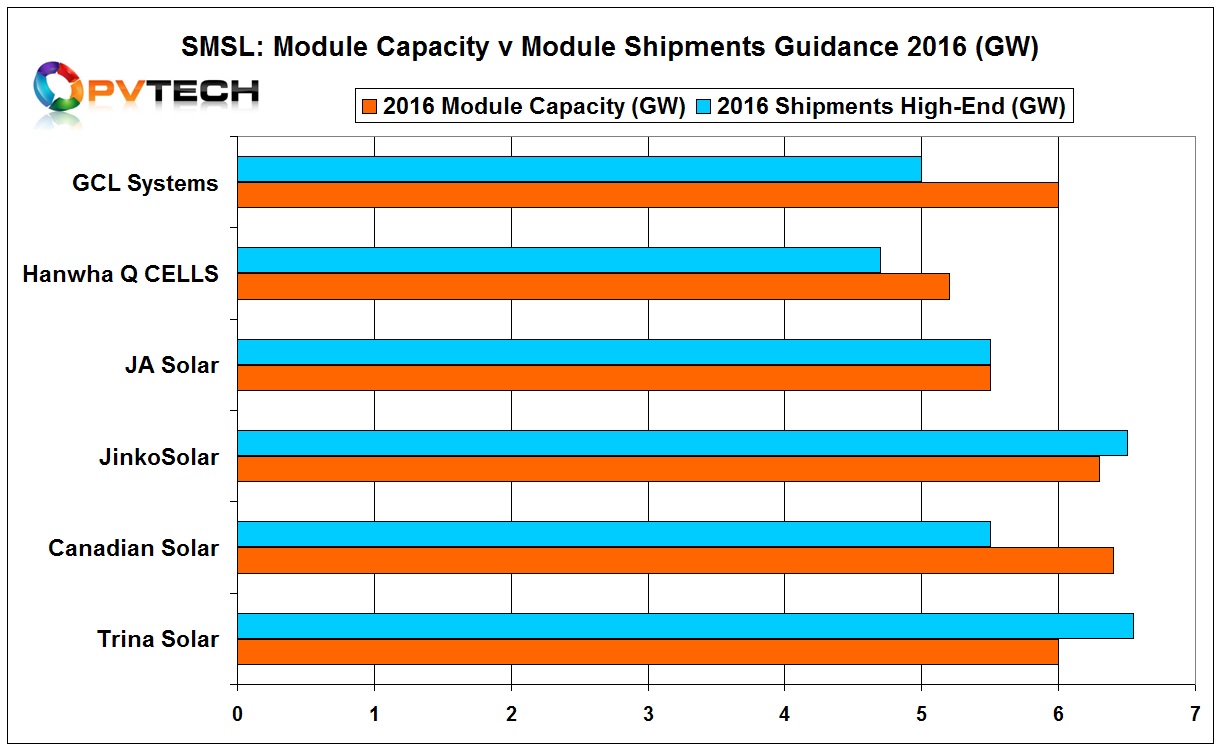 As the second largest (by module shipments) SMSL member in 2015, Canadian Solar was at threat of being surpassed by both JinkoSolar and JA Solar in 2016, based on shipment guidance and module nameplate capacities by year end.

With Canadian Solar’s third wave, its module capacity equals plans by JinkoSolar and JA Solar as well as leading SMSL, Trina Solar. Having flexibility in module capacity is one thing, yet it also says Canadian Solar could raise shipment guidance in future quarters at will, without a module margin hit and retain its market position.