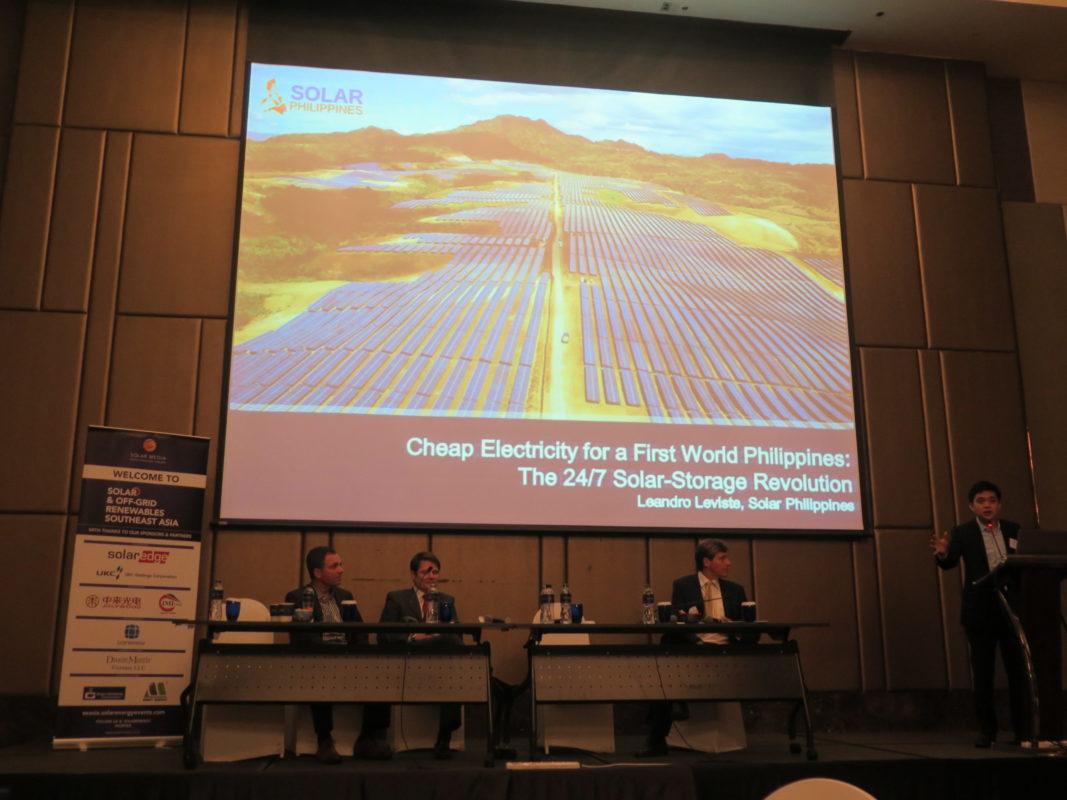 For the most part, it will take some years for solar-plus-storage in the ASEAN region to become economically viable on a large scale, but panellists at the opening day of Solar and Off-Grid Renewables Southeast Asia event in Bangkok, have warned that investors who come on board quickest are going to gain a huge advantage.

The ‘ASEAN Storage Market Potential’ session saw panellists disagree strongly over whether solar-plus-storage had already become an economically viable solution, with some claiming it had already reached grid parity with conventional power generation.

Leandro Leviste, CEO, Solar Philippines, said there was a need for more “daring” developers to enter Southeast Asia and take risks to allow for solar and storage to take on coal-fired power through the unregulated market. This echoed comments back in October about how Leviste's company had commissioned a large-scale solar project in the Philippines without receiving approval from the Energy Regulatory Commission (ERC), achieving a sub-6 US cents per unit tariff by taking merchant risk.

However, not all developers are able to take these risks from either a PV or solar-plus-storage perspective.

Edward Douglas, partner at Southeast Asia renewables-focused firm, Armstrong Asset management, said that putting together a commercial solution for PV and storage had been a challenge. He also noted that there is a lack of system integrators in the region and the storage technology providers were not interested in the smaller markets so far.

He added: “You've got this situation where, commercially, from a financing standpoint, the battery guys won't want the work of the system integrator and vice versa.”

However, he also said the potential for solar-plus-storage is enormous, adding: “Investors aren’t waking up to it really yet; they are beginning to, but the execution of that idea or potential into real projects isn’t happening quickly enough and I think investors who manage to put their pieces in place quickest are going to gain a very significant advantage, because the cost curves like solar are moving much more quickly than most people anticipate.”

Patrick Jaeger, vice president of Conergy Group, a frontrunner in storage deployment, said there was still a lack of understanding of how storage and solar really work when connected to the grid. This was in spite of the large amount of theorising and risk modelling that has been undertaken already. Jaeger also said regulation is far behind the energy storage concepts and this “throws wrenches” into people’s economic models.

Whether storage and solar is commercially viable in the present day or in several years’ time, there was a generally optimistic outlook from the panel.

Franck Constant, CEO, Constant Energy, said that back in 2007, there were only three global markets where one could make money in solar PV: Germany, Italy, Spain. Looking ahead to 2017, he noted that today there are only three markets where energy storage can really make money: UK, Korea, Australia.

Noting the incredible rise of solar since 2007, Constant added: “We've seen this movie before and we know how it ends.”

He also said: “There’s tremendous capability to drop the existing price of batteries and on the other side there’s tremendous potential for utilities and regulators to actually create regulatory conditions for battery payback.”

The panel also highlighted how in Southeast Asia, the value of this hybrid technology is not just about making commercial sense.

Leviste said many consumers would go for PV and storage not just because of savings, but because of reliability, as brown outs are a fact of life for many people in the region.

Jaeger added: “If you look at the real cost of energy for most of the population in Southeast Asia, it's the energy that they don’t have, that’s the most expensive energy.”

Of course, the panel generally agreed that regulation in the region is not helpful to the cause at present, but the future emergence of the Electric Vehicle market was seen as a major driver for reducing battery costs. Leviste also said it was important to factor in the costs of new-build coal-fired power plant in five years’ time (the rough time it takes to build such a station) rather than present day costs of coal. Such modelling could make solar-and-storage economics more compelling right now, he said. However, some of the panel still said it would take several years before the hybrid technology really breaks through.

Leviste also noted that there needs to be more projects deployed to demonstrate the viability of batteries to investors and dispel any misconceptions.

Forecasting a future of massive deployment of solar-plus-storage in place of fossil fuel power stations, he added: “We are going to have a lot of stranded assets but investors are not reacting to that because they don't believe its going to happen, because they haven't seen enough projects and they want to see it before they believe it, so its important to have demonstrative projects.”