New research undertaken by the in-house research team at Solar Media Ltd. reveals that 2017 is expected to be the year that Longi Silicon Materials (incorporating its subsidiary LERRI Photovoltaic Technology) finally moves into the upper echelon of solar PV manufacturers.

Based on analysis contained within the new release of the PV Manufacturing & Technology Quarterly report, the increase in forecasted module shipments from Longi in 2017 will see the company added to our exclusive Silicon Module Super League (SMSL). Recently we also promoted GCL Systems’ Integration to the SMSL.

For 2017, qualification to the SMSL is confined to companies forecast to each ship above 4GW of modules to the end-market, either to third-party installers and EPCs or to in-house project development.

The SMSL for 2017 now has seven members: Canadian Solar, GCL, Hanwha Q-CELLS, JA Solar, JinkoSolar, Longi and Trina Solar. Collectively, these seven module suppliers are forecast to ship approximately 50% of end-market supply next year, providing yet another indication of the scale that this breakaway group has achieved in the past few years. 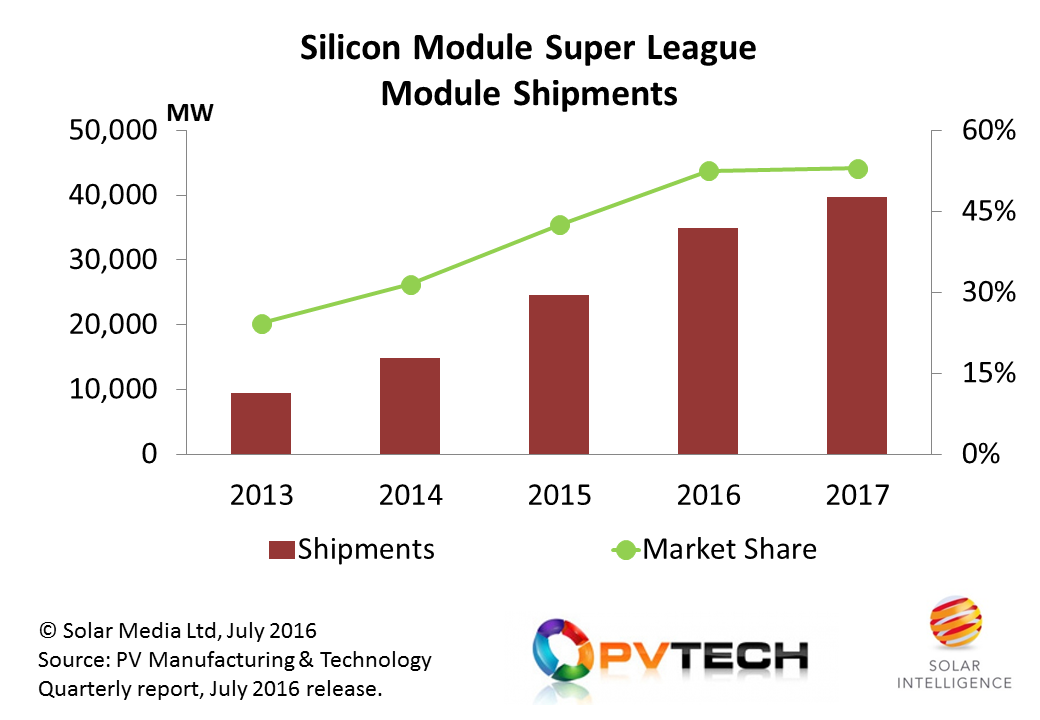 Excluding Canadian Solar and Hanwha Q-CELLS, a key driver for these seven companies being included in the SMSL is the size of the China end-market. The other five members of the SMSL (GCL, JA Solar, JinkoSolar, Longi and Trina Solar) remain heavily dependent on their domestic market, often overlapping with in-house project activity. All seven companies have extensive capacity levels in China.

As shown also in the graphic below, shipments to the US have been increasing significantly in the past few years from the SMSL, with contributions from Japan hitting a peak during 2015. 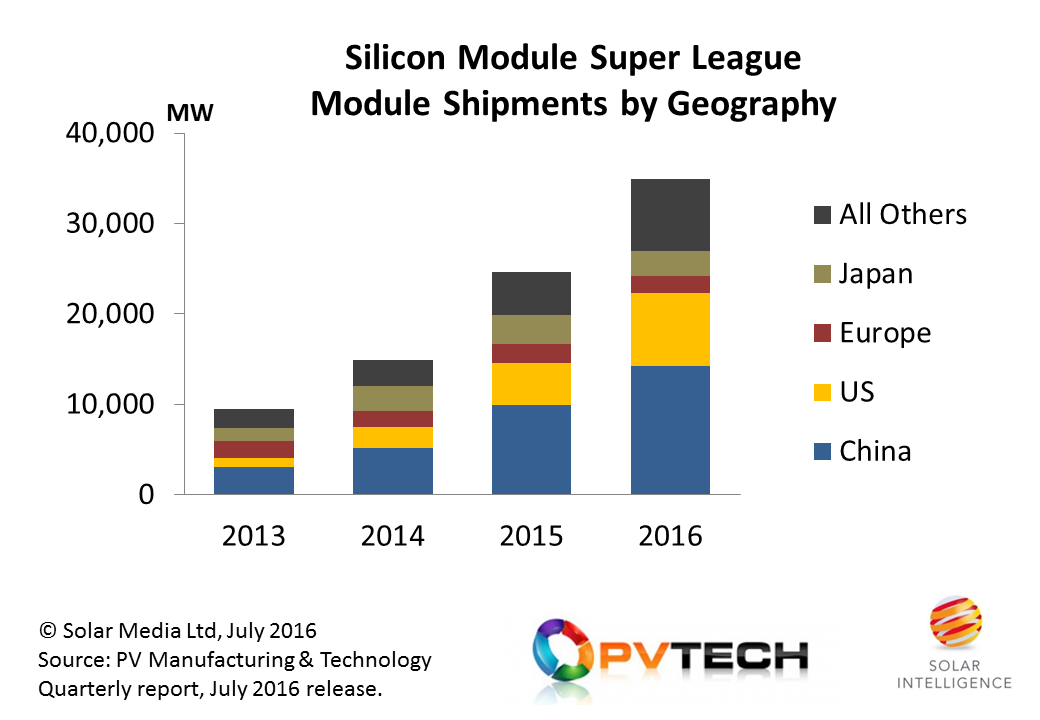 A key feature of almost all the SMSL, and a major factor in these companies having access to the largest end markets today, has been the use of third-party cell and module outsourcing, in addition to adding cell and module capacity across Southeast Asia.

While in theory having cell and module capacity outside China and Taiwan should be showing up as increased market-share contributions to Europe, this is not the case. There are two reasons for this. First, the European market remains soft, with demand from the region’s leading country, the UK, down about 1GW in 2016 compared to last year. But more importantly, the impact of MIP and import quotas is still affecting shipment levels into Europe from all module suppliers originally included in the EU’s governance when the MIP was established.

Adding cell and module capacity in Southeast Asia, or using third-party OEM companies in this region, is of course being stimulated by tariff-free imports to the US market. The graphic below compares the manufacturing trends of the SMSL inside and outside China, with both cell and module capacity and in-house production numbers shown for China and non-China fab locations, along with the changes forecast from 2016 to next year. 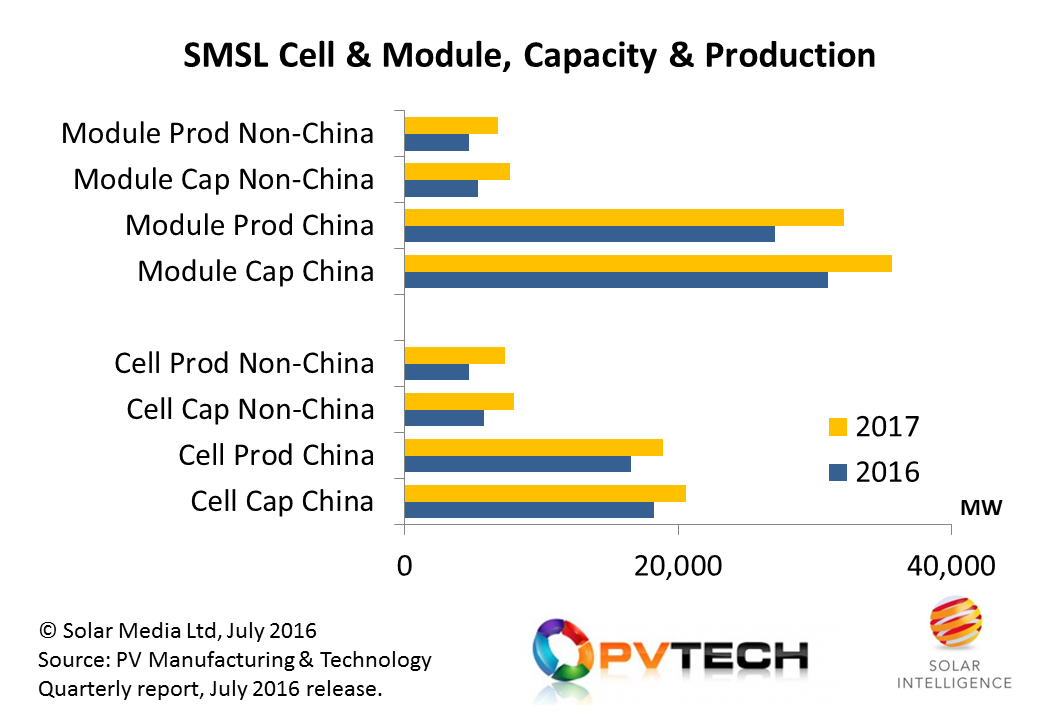 One other interesting trend emerging from our research relates to the level of third-party cells and modules used by the SMSL for branded module shipments. While in 2017, approximately 25-30% of shipped modules from the SMSL will use third-party produced cells, the level of in-house module production is expected to increase significantly.

This can be attributed in part to the expansions by GCL in 2015, but also from the ease with which GW scale module assembly lines can be added bearing in mind that the increase in module capacity during 2016 from the SMSL exceeds the overall end-market demand growth rates.

All details related to in-house production for all industry leading manufacturers, across the entire value-chain from polysilicon to modules, is listed in our PV Manufacturing & Technology Quarterly report, with the latest release out this week from Solar Media Ltd.

With a breakaway group of seven PV module suppliers expected to meet 50% of end-market demand in 2017, the role of their technology choice will be critical for the whole industry to understand.

Which cell technologies are being used? How much PERC production can be expected from the SMSL next year? Is there likely to be an uptick in n-type or p-type mono based modules within the supply mix? What is the impact on polysilicon and wafer suppliers to the industry?

All these questions are expected to be answered at the PV CellTech conference in Penang, Malaysia on 14-15 March 2017, with members of the SMSL among the key speakers taking to the stage to talk about cell manufacturing and technology trends in the industry. Full details on how to register for PV CellTech 2017 – including the post-show report from the March 2016 event – can be found here.

25 April 2022
PV CellTech will be held in Europe for the first time! Join us in Berlin to explore the industry transition to n-type mass production. The event concentrates on presentations only; these forming an almost overload of pertinent facts and details to help anyone looking at forming their internal roadmaps for the next few years regarding PV technology trends.
china, longi silicon, mip, pv celltech, shipments, smsl, taiwan