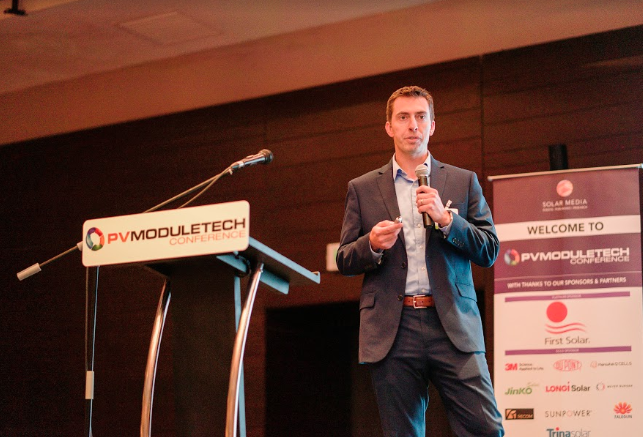 PV Tech caught up with Lou Trippel, vice president of Product Management at US-based thin-film solar manufacturer and developer First Solar, to discuss how the company’s new Series 6 module has been received, sustainability gains from the transition and even the firm’s consideration of recycling capabilities beyond its thin-film remit.

In your talk at PV ModuleTech you mentioned that scaling your manufacturing process to Series 6 is projected to reduce energy consumption by 26% and water usage by 39%. How much was this a focus in your transition?

Lou Trippel: Throughout its history, our technology has been positively differentiated in the sustainability area, having made historical efforts to lead the industry in terms of recycling a decade ago in Europe, and continuing that through our energy payback advantages and low carbon footprint among other sustainability aspects.

Transitioning to Series 6 gave us an opportunity to look at that in the context of everything else. Energy input is a part of the cost equation, and while already having a leading platform in terms of low energy consumption in the production footprint, being able to take that another step further with the Series 6 platform was an added benefit of that investment so we are excited to be able to continue that march and bring sustainability to the industry.

We've been able to reclaim, up-cycle or recycle over 95% of the module components such as glass cullet and polymers and we're able to reuse the CdTe semiconductor material after re-purification. So it’s really a full end-to-end closed cycle that we take pride in. We additionally offer recycling services that any of our customers can utilize.

What is your take on the encroaching issue of recyclability in the rest of the solar industry?

We see trends in the market where the end-of-life recycling and reclamation of a site are mandated in a lot of cases as part of the initial project economics and looked at on a holistic lifecycle basis. That’s how we think most projects should be approached and evaluated. Those that are doing renewables for the right reasons are already thinking this way.

We do see some trends – obviously Europe led the way a decade ago, while the US and others are going in that direction, but we see some markets that are still coming up that learning curve. Ultimately, I think that a sustainable large-scale industry has to be thinking about the entire energy life cycle, the energy payback time and a big part of that is responsible reclamation and recycling at end-of-life whenever that may be.

Modules are recyclable today, but not many manufacturers are taking that leadership position and taking care of it themselves. It’s somebody else’s problem.

First Solar has actually evaluated the possibility of being able to recycle different module technology types, not just our own. Again it’s something the industry is going to confront with the sustained growth that we’ve seen over the past decade and the challenge just becomes that much more important to think about in the overall lifecycle.

How has the industry received your Series 6 module since its introduction?

We've been quite fortunate to work with a lot of customers that have had strong interest in the product. Series 6 certainly came at the right time given some of the tight global module supply situations last year and uncertainty around tariffs. That momentum has continued into this year as customers continue to look for a trusted supplier and the right product to meet their needs.

We've already talked about the benefits of Series 6 in terms of higher efficiency, faster installation times, lower BOS costs versus our past product lines, and those things stand on their own. However, some of the headwinds that were removed with the trade case in the US helped along some procurement that might have been on the tipping point. This has been an ingredient to get us into a pretty good position with respect to a couple years of contracted volume.

That gives us the confidence to be able to expand with quite a bit of certainty around that pipeline, so our efforts are really focused on those long-term procurement partnerships right now and finding the right situations for the product to bring those savings to the customers that are looking into the longer-term horizon.

What advice do you have for manufacturers bringing a new module to market for example when taking into account the installation process performed by EPCs later on?

When I think about the ingredients of a successful product launch, I think about two primary areas: design and execution. From a Series 6 product design standpoint, we spent a lot of time 18+ months ago working with the partners in our product ecosystem who bring mechanical structures and electrical BOS components to the table. We collaborated with them on the features that they would find most beneficial in terms of fast installation times and compatibility with their structures. Simultaneously, we looked at improving our cost architecture in terms of scale throughput. So there were opportunities to innovate together for mutual benefit and those are some of the ingredients that made Series 6 what it is today, and what it will be in the future as the product platform evolves.

From an execution standpoint, First Solar has demonstrated a history of rapid innovation with low risk. At last year’s ModuleTech, I spoke directly about the benefits of our single technology and manufacturing platform and the benefits of fully transparent end-to-end manufacturing under one roof. This culture and capability has been a key part the Series 6 launch effort and has proven quite valuable in building trust with early adopter customers and stakeholders.