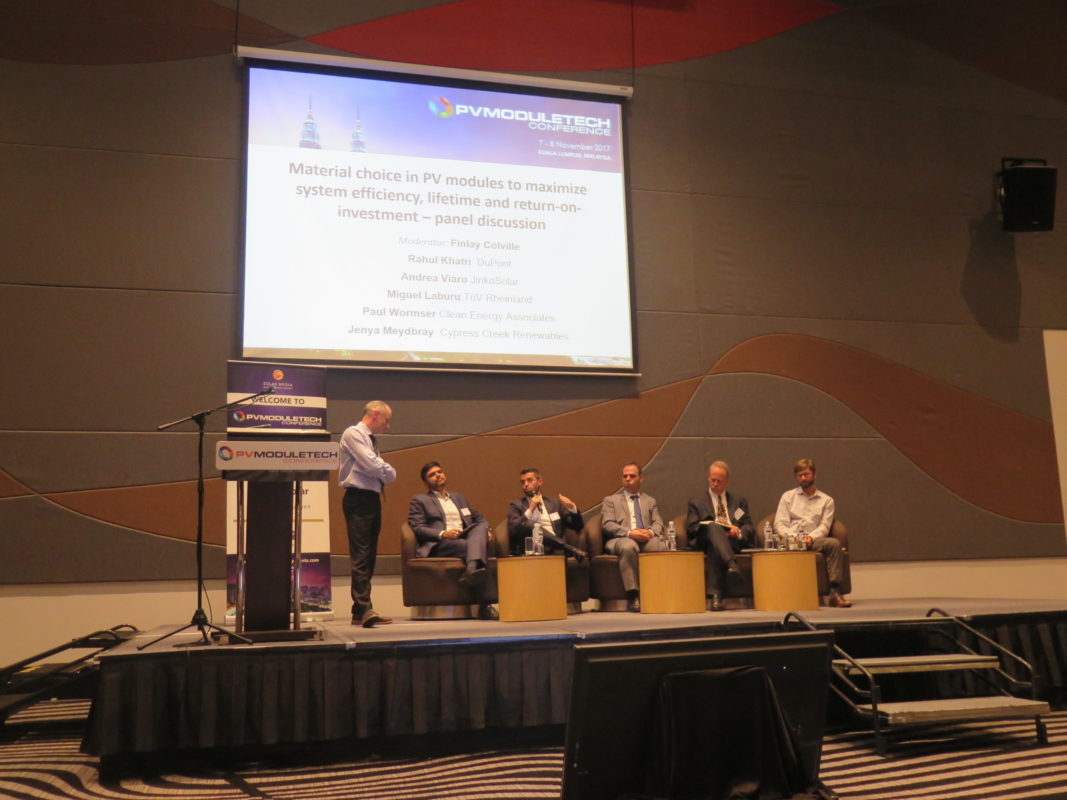 Today, there are well above 300 companies operating module assembly lines. This ranges from factories with just a few megawatts of equipment capacity, to multi-GW fabs. Module lines are installed today across all geographic regions, in more than 100 different countries.

However, very few module suppliers can be considered truly global, regardless of how one defines ‘global’ today in the solar industry. (I will take a fresh look at this topic again in the feature.)

The solar industry is now going through a harsh reality-check phase, having been somewhat distorted by what has been happening within China over the past few years; and this is poised to redefine the group of companies that will satisfy non-mainland-China module supply in 2019.

This article takes a closer look at the type of module companies that will be internationally known over the next 12-18 months, and beyond. The research has been done recently by PV-Tech’s in-house market research group, and will culminate in October during the PV ModuleTech 2018 conference in Penang, on 23-24 October 2018.

At the PV ModuleTech 2018 conference in October, the leading international module suppliers will be on stage, outlining their product offerings for 2019. This group of companies, including the likes of First Solar and SunPower, are among the most bankable suppliers to the industry today, and are routinely on the list of approved companies by utility-scale lenders.

At the start of 2018, we presented our Top-10 Module Suppliers of 2017. Since our (very) early compilation, a few minor tweaks were reported to start-of-year estimates, in particular relating to the quantity of company-branded modules being supplied to the in-house project development work done by some of the companies listed.

The final revised Top-10 for 2017 is actually much better if we call this a Top-12, as this group is well ahead of all others, and there is not much between the ranking positions 10, 11, and 12. 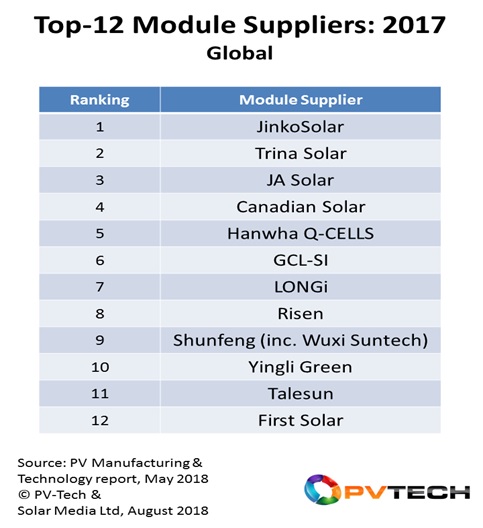 The inclusion of Talesun and First Solar in the above list is crucial, as opposed to looking simply at a top-10 list in which the final few are close in terms of module shipments.

Indeed, companies such as Talesun and Risen are particularly relevant today as China demand sees its much-needed reality-check. There is no doubt that when we look at which of the hundreds of module suppliers headquartered in China will be the ones that can adapt to a global end-market in which China is less significant, then those that have international experience already will be firmly in the driving seat.

It remains a fact that only about 10 Chinese-headquartered module suppliers have been active globally in the past few years. Eight of these 10 companies are shown in the table above. Others have simply outsourced to contract makers in Southeast Asia when shipments to tariff-constrained regions presented themselves as immediate opportunities.

Indeed, Talesun and Risen typically receive less credit globally, compared to US-listed (albeit a dwindling number these days) China-HQ Silicon Module Super League (SMSL) players. However, the focus on utility solar and bringing finance into shovel-ready sites has many similarities to the route taken by companies like Canadian Solar in the past few years.

The most interesting fact from the above table however is that almost two-thirds of all MW shipments in 2017 came from the above module suppliers. And if we confine 2017 demand purely to utility-scale (remove all residential and C&I type installation), we move to above three-quarters.

Surely this set of companies becomes the first port of call when talking about bankability prospects for utility scale solar? Certainly, these companies feature most on lender’s approved lists – or should do! Perhaps scanning through the other GW-plus suppliers there are obvious contenders to add here, such as SunPower and REC-Solar, but it is hard to get to more than 20 companies that ought to be on non-China utility-scale approved-supplier listings today.

Until now, the solar industry has not cracked the bankable-list conundrum, and this is perhaps one reason why so many EPCs and developers are left to contemplate on supplier choice once sites are fully operational.

Many of the module suppliers shown in the table above (and cited elsewhere in this article) will be at PV ModuleTech 2018, outlining their product offering for utility-scale solar sites in 2019-2020, and explaining the technology and financial metrics that underpin their bankability-status in the industry today. The learning potential for EPCs and developers (including asset owners/managers and O&Ms) is clearly evident.

Indeed, I have taken on the task of providing an independent overview of what we see at PV-Tech will unfold in 2019, once we remove China end-market supply, and the module suppliers in China that will not make the transition from domestic-supply-dominant to overseas-shipment leaders.

Details on how to participate in the PV ModuleTech 2018 event in Penang on 23-24 October 2018 can be found here, including information on how to register to attend.