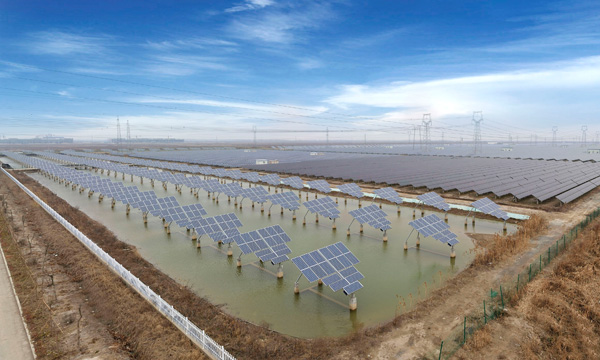 The first wave of public listed China-based, China centric PV manufacturers reporting first half year financial results offers insight into the impact on companies after the Chinese Government capped utility-scale and distributed generation (DG) PV power plant projects at the end of May, 2018.

The Chinese Governments caps on PV power plant deployments, commonly known as ‘531 New Deal’, due to the date the National Development and Reform Commission, the Ministry of Finance and the National Energy Administration, jointly issued new policies to curtail the rapidly expanding domestic market that had led to outstanding FiT payments by the end of 2017, that had ballooned to approximately US$17.5 billion.

Adding to the challenges in the China market was the realisation that rapid growth in deployments, notably 2016 and 2017 had already stalled during the second quarter of 2018, before the caps were imposed in June.

The year did not start strongly, although the first quarter is seasonally the weakest quarter for PV deployments, due to winter weather and China New Year, many companies reported operating income below the levels set in first quarter of 2017.

This is in contrast to China’s National Energy Administration (NEA) figures that deployments totalled 9.65GW in the first quarter of 2018, a 22% increase over the prior year period.

Typically, there has been a strong bounce back in operating income in the second quarter, due primarily to the rush to complete utility-scale projects ahead of the FiT change at the end of June.

Notably, the utility market did bounce back strongly in the second quarter with over 10GW installed, while the DG market softened to just over 4.5GW. 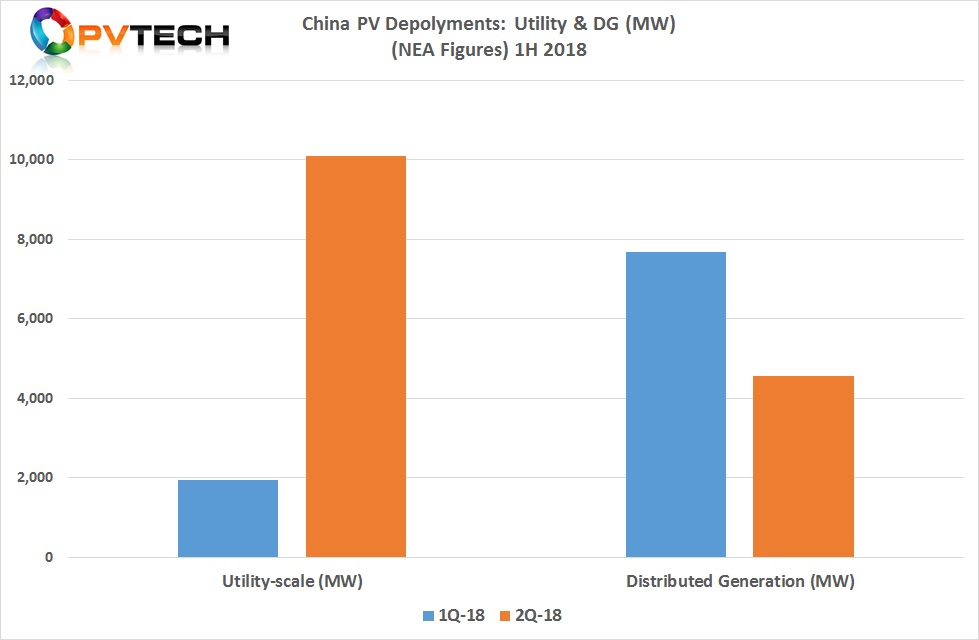 The first wave of China centric PV manufacturers and project developers (many are both) to report first half year financial results clearly show the first signs of the impact of policy changes in China.

The company cited several reasons for the significant losses expected in the reporting period. Notably that sales of solar products (wafers, cells and PV modules), mainly through PV Module manufacturer Wuxi Suntech flat-lined with only a 0.5% increase over the prior year period. However, competition and looming overcapacity meant average selling price (ASP) of the Group’s modules and solar cells decreased by approximately 2.1% and 17.6% respectively as compared to the prior year period.

SFCE decided to make an impairment charge of approximately RMB 681 million (US$99.7 million approx.) for the property, plant and equipment in the reporting period.

A long standing issue of grid curtailment has dogged SFCE, despite some improvements in some regions of China in the last year. SFCE noted that grid curtailment in regions such as Xinjiang and Gansu is expected to result in an estimated loss of approximately 208,000,000kWh in terms of power generation volume and approximately RMB 160 million (US$23.4 million) in revenue loss.

Solargiga Energy Holdings an integrated monocrystalline PV manufacturer warned that it expected to make a loss of around RMB 103.816 million (US$15.1 million approx.) in the first half of 2018, after reporting preliminary revenue of RMB 1,805.5 million (US$270 million), a 9.3% decline from the prior year period.

Total external product shipments were 1,207MW, up 3.9% from the prior year period. The sales decline then was believed to be primarily due to ASP declines.

However, Solargiga noted that the ‘unexpected’ decline in sales volume and price was caused by the 531 New Deal and as a result a build-up of inventory in the reporting period.

Finally, GCL-Poly Energy Holdings, the largest multicrystalline wafer and major polysilicon producer warned that profits were expected to decrease by approximately 60% to 70%, compared with profits of approximately RMB 1,195.9 million in the prior year period.
The company noted that the steep decline, which had been ongoing was due to was primarily due to a decline in wafer ASP and an increase in finance costs and exchange losses.

Major PV module and module materials manufacturer Risen Energy Co noted in its first year report that total demand had decreased when compared to the prior year period, while capacity utilization rate of the PV industry were maintained at relatively high levels.
As a result, gross profit margin of its main products (solar modules & encapsulants) decreased, and the company's operating profit decreased compared with the same period of last year. 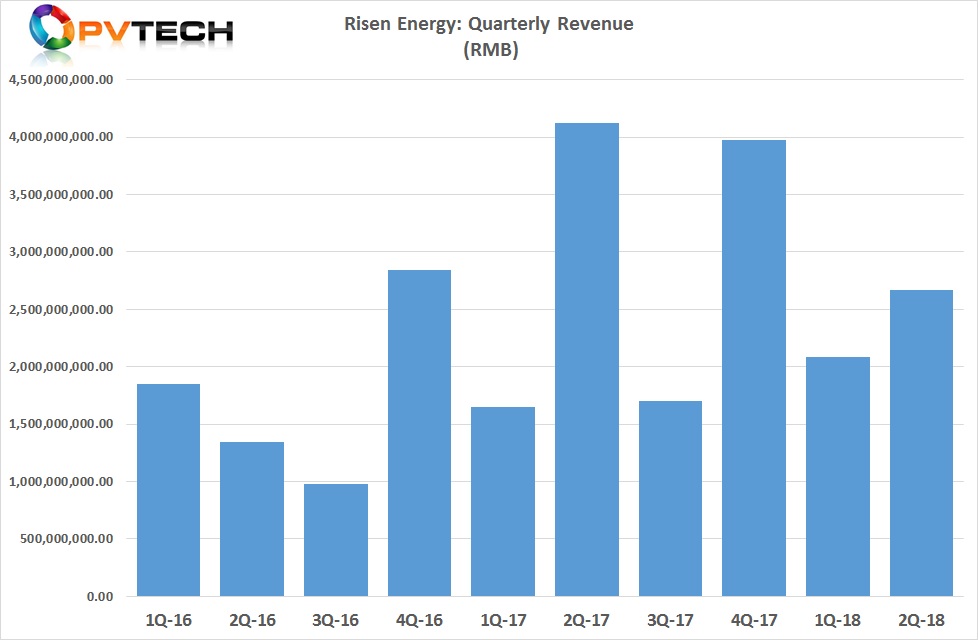 At the other end of the scale (1.2GW of PV module capacity), PV module manufacturer Eging Photovoltaic Technology said in its first half year report that the 531 New Deal, ‘caused a lot of shock in the photovoltaic industry’, and had imposed ‘large operating pressures and the profitability situation is grim.’ 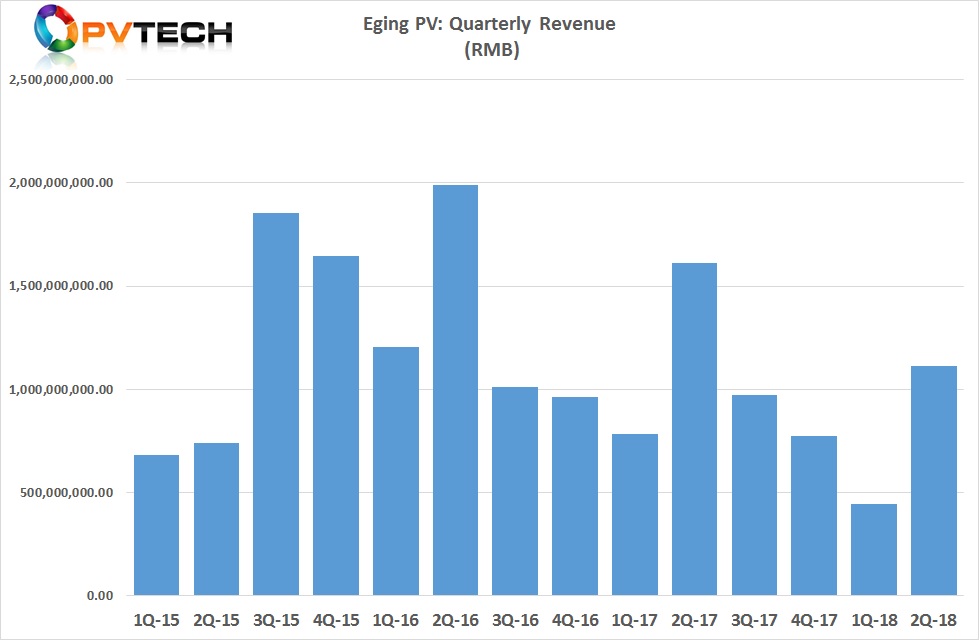 Net profit attributable to shareholders was only RMB 1,404 million (US$205,917 approx.), a decrease of 42% over the prior year period. The main reason for the said to be intensified market competition, and the gross profit margin of component products declined as result during the reporting period.

Vietnam-based PV module manufacturer Boviet Solar, part of Chinese metals firm Ningbo Boway Alloy Material Co was not impacted by the 531 New Deal, instead it was the US Section 201 anti-dumping duties.

Editor note: Errors were made in translation regarding Boviet Solar's operating income and net profit for the reporting period, which showed signficantly less income and profit levels. The above sentence has been corrected.

In contrast to the above first half financial results and those preparing to release results, several ‘Silicon Module Super League’ (SMSL) members such as leader, JinkoSolar, Canadian Solar and GCL-SI have reported mixed results but JinkoSolar and GCL-SI have highlighted that international sales footprints have been a key factor in limiting the impact from policy changes in China.

The SMSL noted that it had lowered full-year PV module shipments to 6GW to 6.2GW, compared to previous guidance of 6.6GW to 7.1GW.
Full-year revenue was lowered to US$4.0billion to US$4.2 billion, down from US$4.4 billion to US$4.6 billion, previously guided. 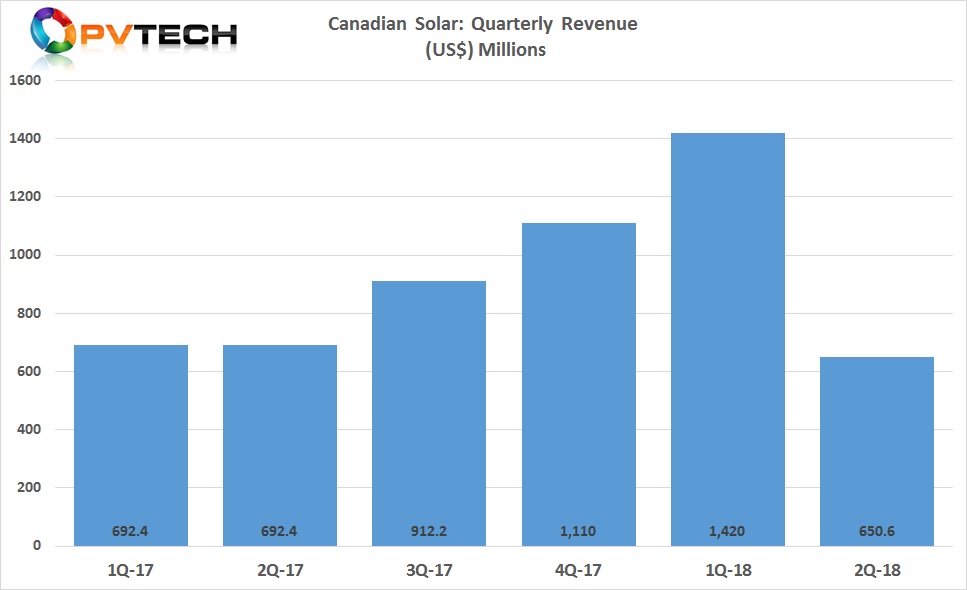 JinkoSolar recently reported higher than guided second quarter PV module shipments and reiterated total shipments guidance to be in the range of 11.5GW to 12GW in 2018.

However, JinkoSolar reported a lower gross margin of 12.0%, compared with 14.4% in the first quarter of 2018. This was due to Average Selling Price (ASP) declines. 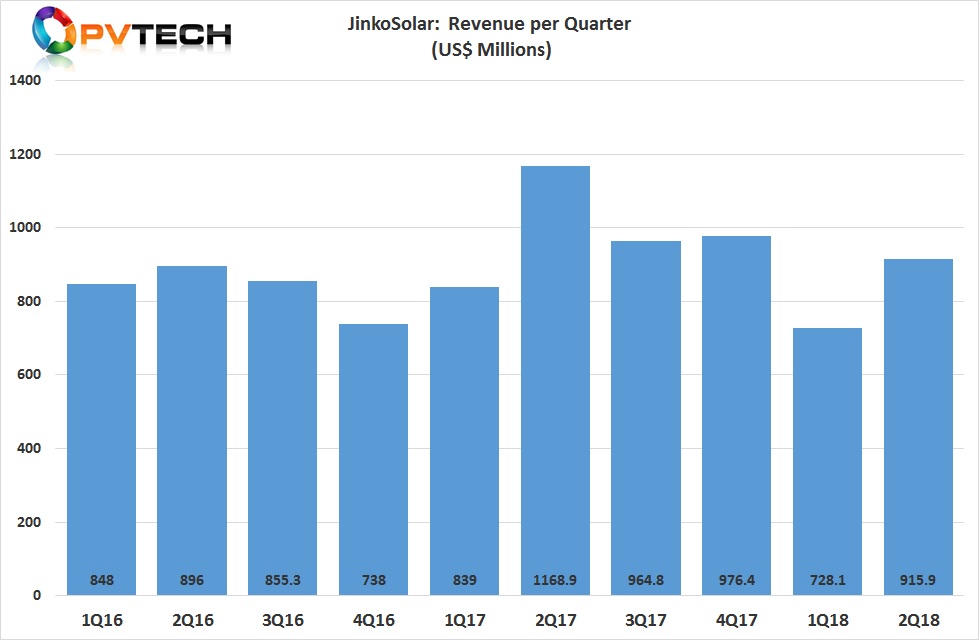 GCL System Integrated Technology (GCL-SI) reported a significant shift of its sales to outside China in the first half of 2018, accounting for 45.80% of total sales in the reporting period that also helped return the company to profitability. 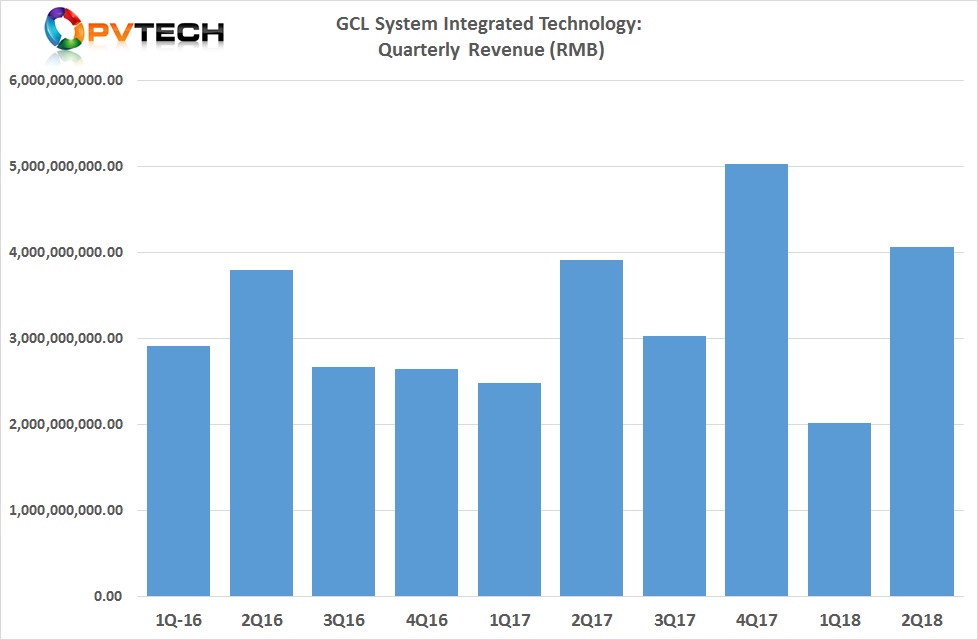