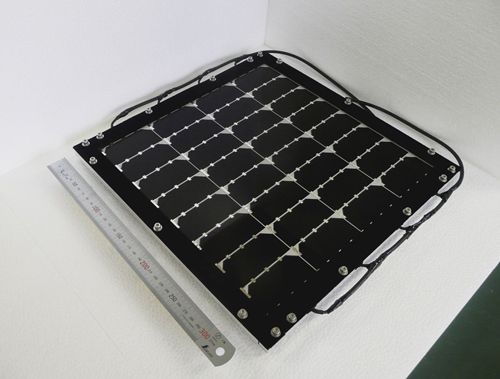 A triple-junction compound solar module with a conversion efficiency of 31.17% has been created by a project involving Japan’s New Energy and Industrial Technology Development Organization (NEDO) and Sharp.

NEDO announced last week that the efficiency was recorded as part of an ongoing series of efforts to reduce the cost of solar power generation to ‎¥7 (US$0.06) per kWh by 2030. The non-concentrating solar module was made with solar cells of what NEDO called a “practical size” of roughly 28cm2, put into a 31cm x 31cm (968 cm2) module.

While Sharp has previously achieved an efficiency of 37.9% for an individual PV cell using similar technology, that device had an area of just 1.047cm2. Using a triple junction cell means that the photovoltaic properties of the compounds indium gallium-phosphide (InGaP), gallium arsenide (GaAs) and indium gallium arsenide (InGaAs) can be used to capture a wider range of the spectrum of sunlight.

NEDO also said Sharp had been able to improve “uniformity in the surface of the substrate” by optimising manufacturing conditions. The organisation highlighted that the cost reduction and innovation programme, which runs until 2019 having started last year, will continue to chase high conversion efficiencies at lower cost, as well as looking at other areas including R&D into re-use of thin-film materials.

As has been stated on numerous occasions, there is clearly a gap between development of promising technologies with higher conversion efficiencies and their commercialisation. NEDO claimed that there could be applications for the new module type, which is “lightweight and flexible” in cars. Small solar sun roofs could help auto manufacturers reduce emissions by supporting heating and cooling systems for motors as they start up, for instance. Audi already offers solar sunroofs as an optional extra for some models, but so far appears limited to supplementing temperature control for the car’s interior.

It is also difficult to make true ‘like-for-like’ comparisons for PV cell and module efficiencies. NEDO claimed Sharp’s latest record bettered an existing “record efficiency” of 21.4% for a similar module by Alta Devices in 2012. Alta Devices has however, managed a higher efficiency since then, 31.6%, with a dual junction cell.

Last year, PV Tech reported on an efficiency “arms race” with SolarCity, Panasonic and SunPower all weighing in with their efforts. Each maker touted the different advantages of their own achievements – with SunPower perhaps the winner with an already-commercially available module, the X-Series X21 panel, at a verified 21.5% efficiency.

In other Sharp news, new Taiwanese majority owner Foxconn has affirmed its commitment to the Japanese company’s existing solar business, according to Reuters, which claimed a statement had been made in a letter sent to shareholders. Meanwhile, The Japan Times reported it had seen an internal notice posted on a website for Sharp employees stating that the management was committed to reviving the ailing solar segment of its business.

There had already been some indication of that nature from Sharp CEO and president Kozo Takahashi, as reported by PV Tech and sister site Energy-Storage.News back in early April. Takahashi said the Sharp Energy Solutions brand would continue post-takeover and that this would include solar, storage and home energy management (HEMS) solutions, as well as 'mega solar' (utility-scale).