PV manufacturing capacity expansion announcements in the first quarter of 2018 continued to follow the strong trend set in the fourth quarter of 2017. The quarter also represented a revival in thin-film expansion plans as well as the return of PV module assembly outpacing solar cell announcements. Also notable was the return of India and the US as major destinations for new capacity plans.

The majority of expansion plans came from the PV module assembly segment, which topped 8,600MW. Only one month (November 2015) had exceeded this figure when 11,180MW of module assembly plans were announced.

Solar cell expansion plans in January 2018 were 2,850MW, down significantly from 7,350MW in the previous month and down substantially from 20,000MW announced in November 2017, which set a new record for monthly solar cell expansion announcements.

Therefore it should be a surprise that after just two months when a total of 27,000MW of new cell capacity plans had been announced, January would experience further declines. In fact, 2017 stands out for breaking the trend since 2014 that solar cell expansion plans closely tracked those of module assembly. However, solar cell expansion in 2017 accounted for more than 65% of the total.

As a ‘Silicon Module Super League’ (SMSL) member, we will cover LONGi later in the SMSL review but the company accounted for 5,000MW of module assembly expansion plans in January in China and a further 1,000MW of cell and module plans in India.

Soon after its formation, UREC was cited in media reports as being interested in establishing cell and module manufacturing operations in the US, post the Section 201 trade case, as high tariffs were imposed. Some reports indicated a 500MW to 1,000MW nameplate capacity that could be implemented in phases. 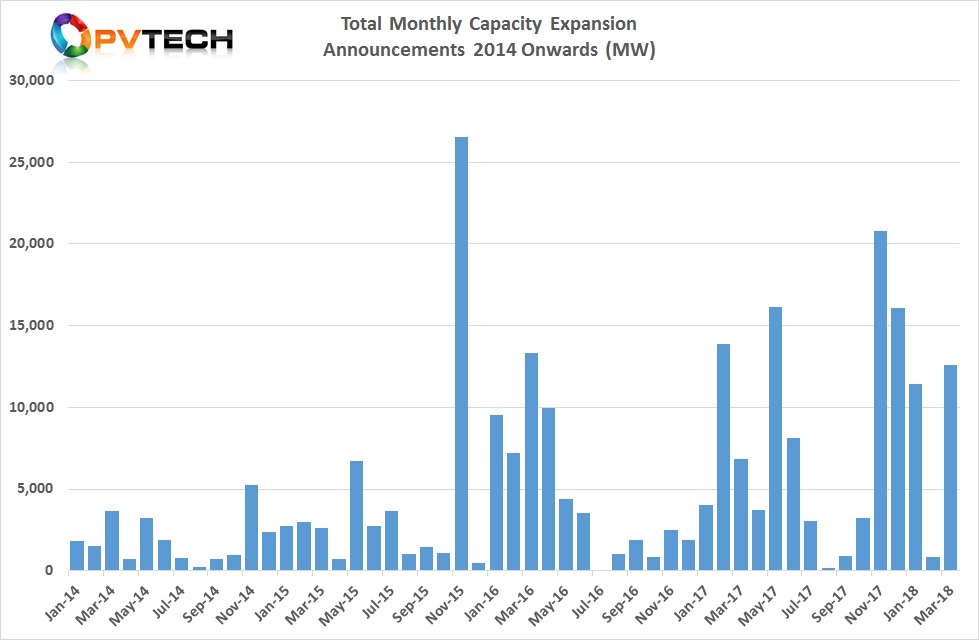 The month of February was in total contrast to the previous month as only a combined total of 850MW of new expansion plans were announced.

Only 500MW of solar cell expansions were announced coupled to only 350MW of module assembly.

Notable was a proposed 150MW module assembly expansion at Recom-Sillia in France and plans by Mission Solar in San Antonio, Texas, USA to double module assembly capacity to 400MW, which was after the Section 201 trade case tariff decision.

After the collapse in announcements in February, March bounced back stronger than January, accounting for a combined total of 12,570MW of new cell, module assembly and thin-film expansion plans.

Hanergy would seem to have created a completely new business model in 2017 that provides new industrial parks a selection of portfolio of a-Si, CIGS, GaAs and c-Si heterojunction (HJ) turnkey production lines to provide local government bodies access to solar technology and attract other hi-tech companies to new industrial parks.

The company announced for the first time in its 2017 annual report, issued at the end of March that it had already secured contracts from three newly formed industrial park project companies in Mianyang Sichuan, Datong Shanxi and Zibo Shandong, who had purchased thin-film production lines from the company valued at approximately RMB 11.3 billion (US$1.79 billion).

Hanergy TF noted that it had delivered the equipment for the first 120MW production line during 2017, with an advance from the customer of US$4.05 million. Total equipment orders outlined in its annual reported reached 2,740MW.

India was also notable for around 28 dedicated PV module assembly firms planning small-scale expansions that reached around 4,000MW, while several cell and module producers planned a total of over 200MW of cell expansions.

Leading SMSL JinkoSolar also provided expansion plan updates totalling 2,500MW in March on top of the 400MW module assembly plans for the US, which were announced in January, 2018. 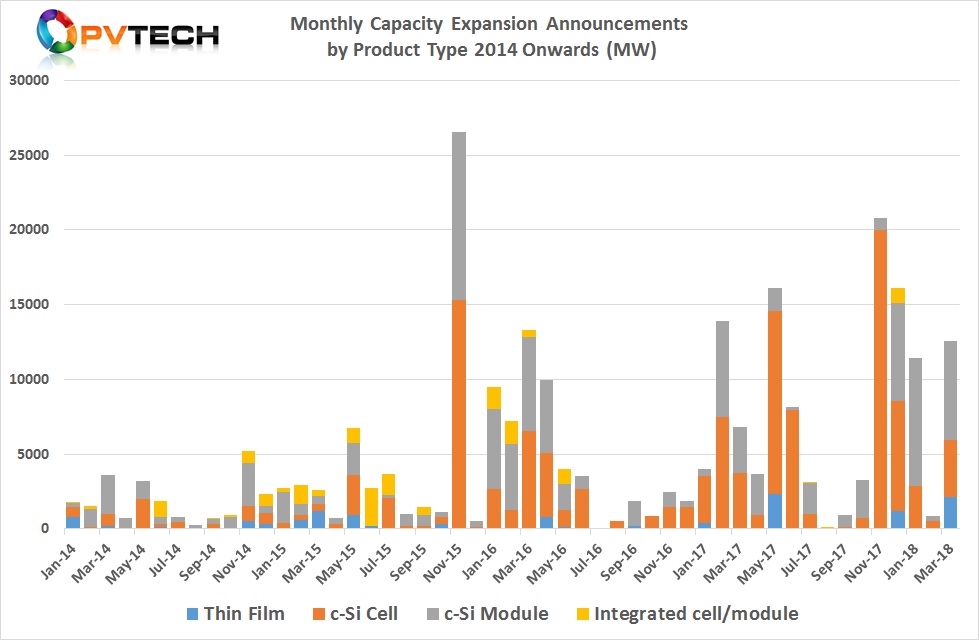 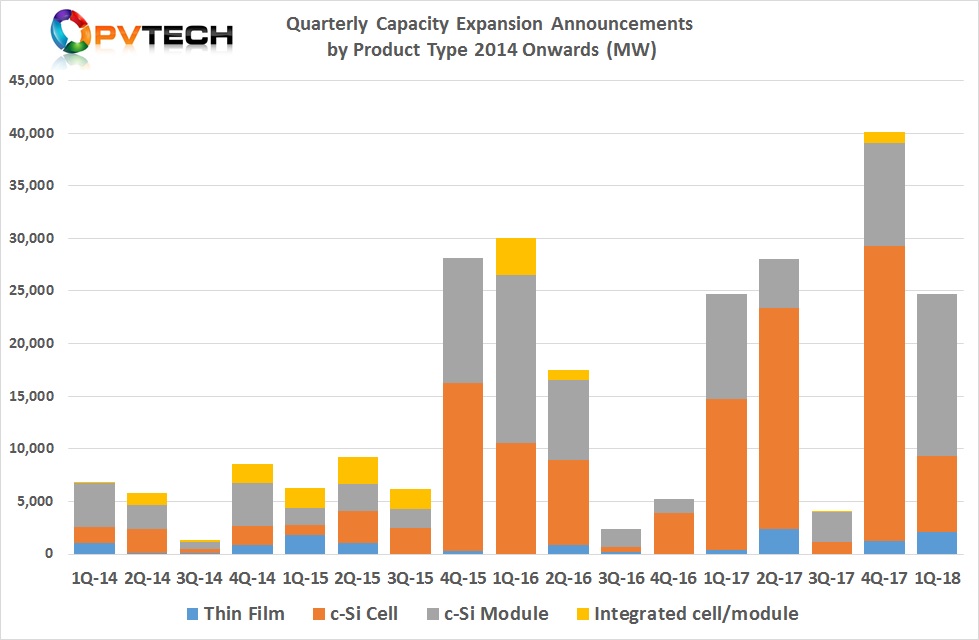 However, the Q1 2018 breakout by segment is more biased to module assembly expansion plans, while the Q1 2017 bias was towards solar cell expansions.

A key trend consistent from the beginning of 2014 has been that the first quarter of each year has been strong for expansion plans and in the last three years exceeded or came close to reaching total combined announcements of 25,000MW.

In Q1 2018, module assembly capacity expansion plans topped 15,570MW, the second highest on record, only exceeded in the first quarter of 2016 when plans announced topped 16,000MW.

Thin film activity increased quarter-on-quarter, due solely to Hanergy and totalled 2,140MW in the quarter, up from 1,200MW in Q4 2017. 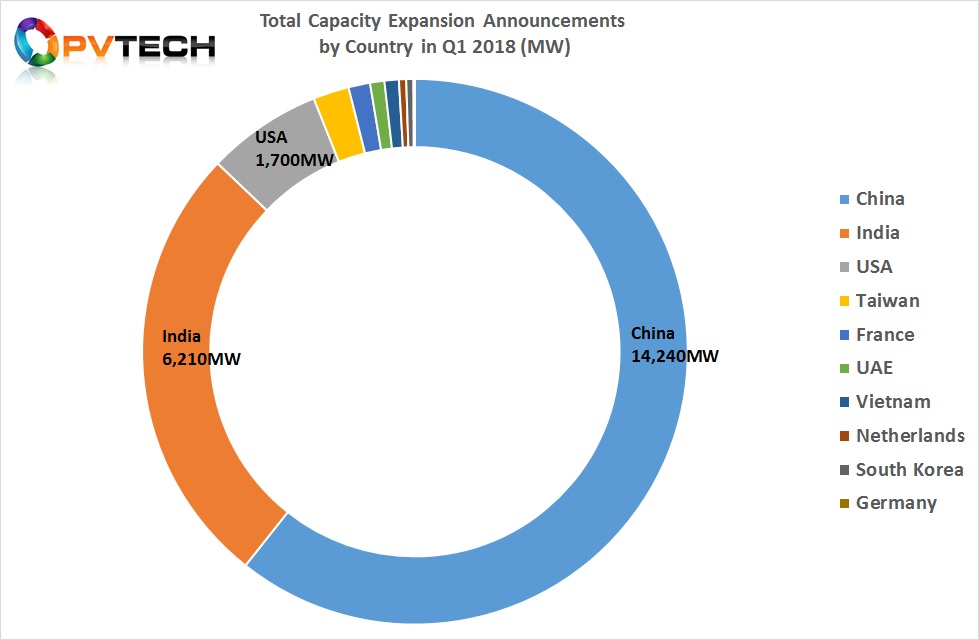 However, Q1 2018 saw the re-emergence of India as the second largest destination for planned expansions. India accounted for 6,210MW in the quarter, or 27% of the combined segment total.

As already noted, plans from domestic module assembly companies totalling around 4,000MW were a key driver, while China-based LONGi announced 1,000MW of both solar cell and module assembly plants to be built in the country.

The resurgence of India is believed to be driven by threats of anti-dumping duties in India as well as momentum building, despite challenges in the downstream utility-scale sector. Indeed, with the US imposing further anti-dumping duties in early 2018, India becomes even more important to PV manufacturers located in China.

As previously noted in these reports, PV manufacturing capacity expansion announcements in India have proved significantly difficult to translate into ‘effective’ capacity. 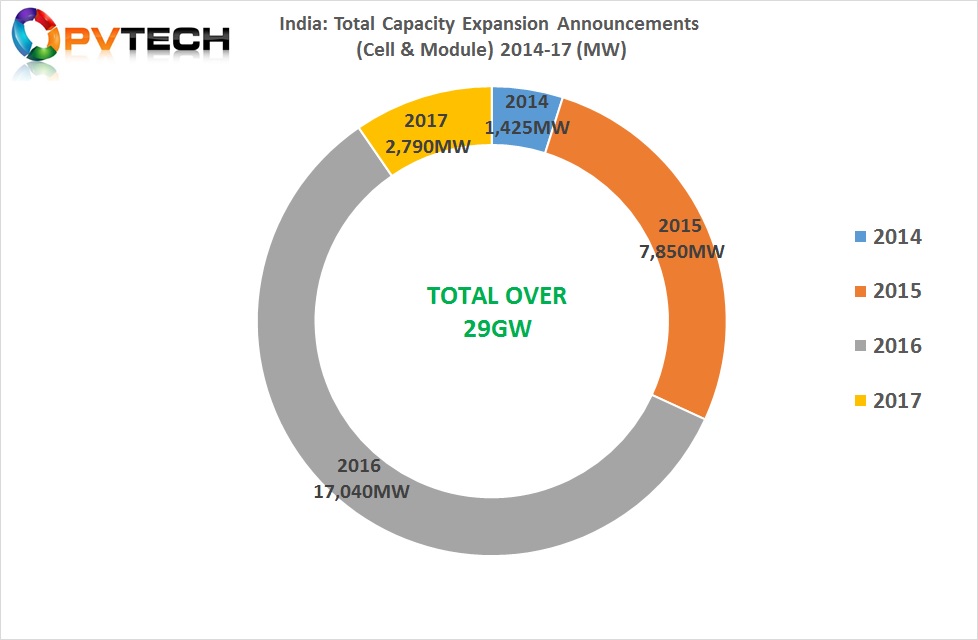 However, adding to the challenges in developing effective new capacity in India are the low utilisation rates of existing manufacturing facilities.

However, at the time of this report only JinkoSolar, Canadian Solar, Hanwha Q CELLS and LONGi Group have provided updates. Since going private, Trina Solar has not provided updated information on capacity expansion plans.

Leading SMSL member JinkoSolar is planning further capacity expansions across wafer, cell and module assembly in 2018, including a module assembly plant in the US, after strong capital expenditures in 2017 that totalled US$480 million.

In 2018, JinkoSolar has set plans to add 1GW of in-house wafer capacity in the first quarter, bringing total nameplate capacity to 9GW. By the end of the year a further 500MW expansion of wafer capacity is expected. 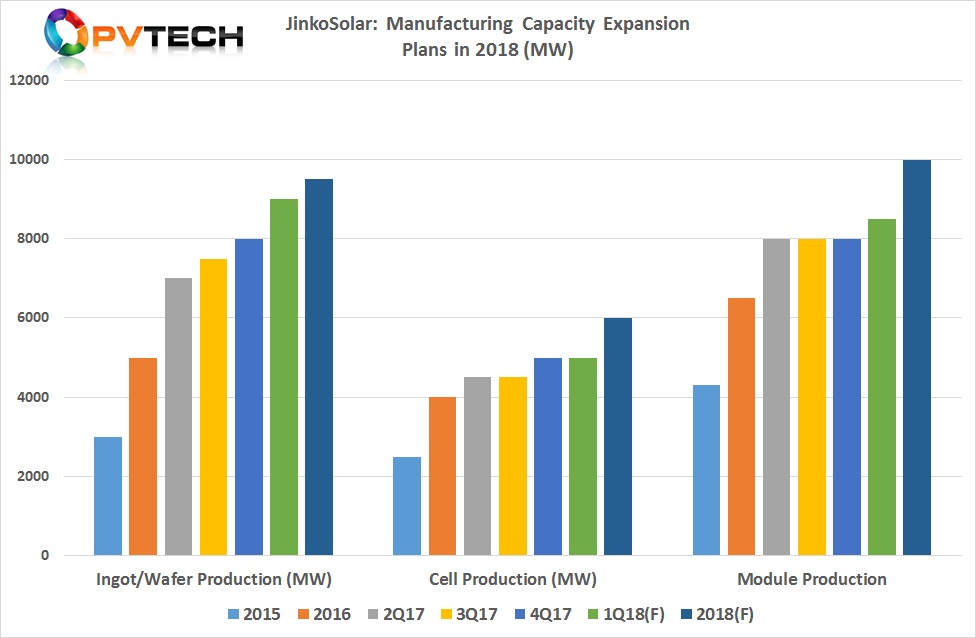 The difference between 2017 and 2018 expansions, apart from a slowdown in wafer capacity expansion plans, is the establishment of a 400MW module assembly plant in Florida.

The SMSL noted that its wafer manufacturing capacity at the end of 2017 stood at 5.0GW, a 3GW increase from 2016. However, the company has not announced new wafer capacity expansions for 2018, keeping capacity as 5GW. 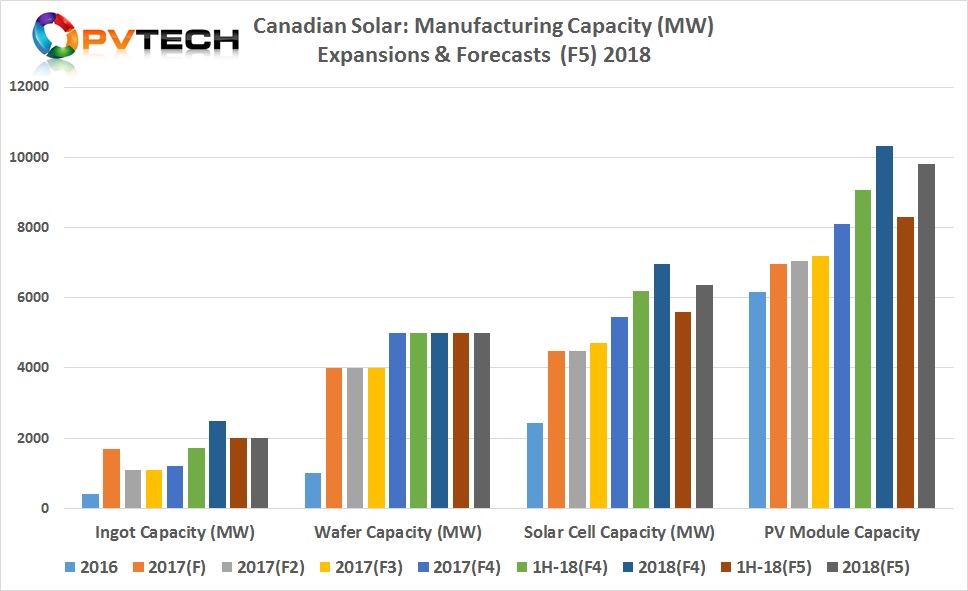 A similar adjustment has been made to in-house module assembly capacity expansion plans. The SMSL noted module capacity reached 8.11GW by the end of 2017, up from 6.17GW in 2016. The company said that module nameplate capacity was expected to reach 8.31GW by mid-2018, compared to its last update of reaching 9.06GW in that time frame.

Total module assembly capacity by the end of 2018 is targeted at 9.81GW, compared to 10.31GW guidance, previously given. Canadian Solar has not issued its annual report and therefore has yet to disclose capex figures for 2017.

Canadian Solar’s management noted that it had recently experienced under-utilization rates at its module assembly plant in Canada and its manufacturing plant in South East Asia, due to the Section 201 tariff decisions by the US government.

The fifth ranked SMSL, Hanwha Q CELLS had already restricted capital expenditure throughout 2017, all except for a the JV manufacturing plant in Turkey planned in response to building a 1.3GW (DC) PV power plant in the country which is expected to be operational in 2021.

The company had previously guided capital expenditures in 2017 to be around US$50 million, which would be allocated to manufacturing technology upgrades and certain R&D related expenditures. However, the SMSL’s capex in 2017 was US$66.1 million, while R&D expenditure was down 51.2% to US$24 million, compared to US$49.2 million in 2016.

The SMSL had an in-house name plate capacity of 4,300MW for solar cells and modules at the end of 2017, unchanged from the previous year.

In 2018, Hanwha Q CELLS expects a slight increase in capex, due to initial spending on its new integrated manufacturing operations in Turkey. The company guided capex of US$90 million in 2018 and an allocation of around US$37 million to the new plant in Turkey.

In early April, so technically outside the scope of this report, the SMSL reported a fourth quarter loss of US$50.5 million, primarily attributed to the asset write down of its entire wafering operations, which were based at dedicated facilities in Lianyungang, Jiangsu Province, China.

The company had multicrystalline ingot nameplate capacity of 1,550MW and 950MW of multicrystalline wafer capacity. The SMSL cited that the wafering operations were unprofitable as well being impacted by a downward trend in wafer prices.

However, the JV in Turkey requires Hanwha Q CELLS to establish wafering operations not just solar cell and module assembly to comply with the downstream project tender win. 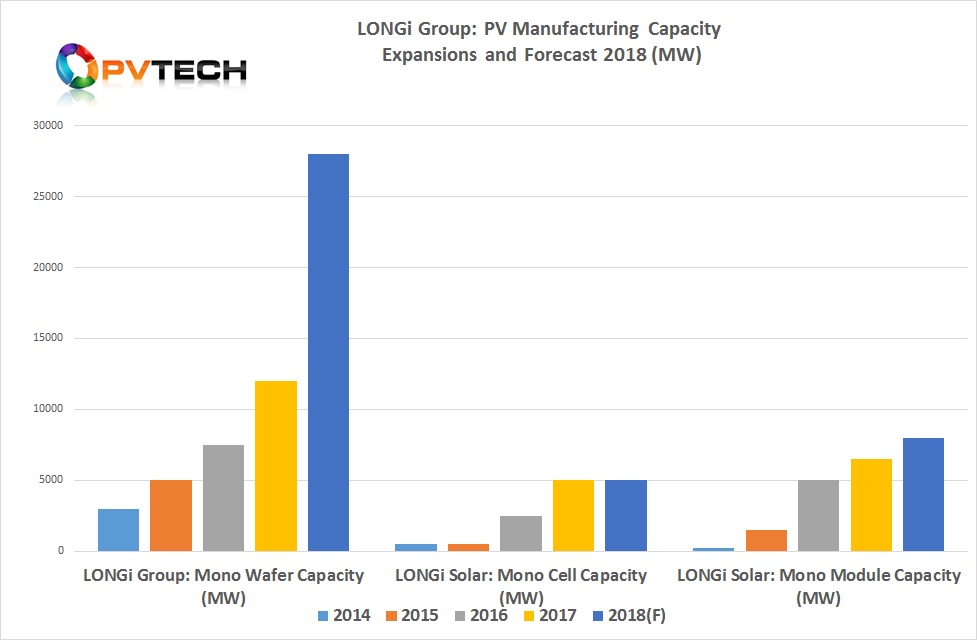 However, separate to the expansion cited, LONGi Group announced in the first quarter of 2018 that it would invest US$309 million, including around US$240 million in constructing a new facility in Andhra Pradesh, India, with an initial nameplate capacity of 1,000MW of monocrystalline solar cells and expand its mothballed 500MW module assembly plant (previously announced) to 1GW.

The new solar cell facility is expected to be operational in January 2020, while the expanded module assembly plant plans are expected to be completed and production ramp occur by the end of August 2019.

The capacity expansion announcements in the first quarter of 2018 remained strong, driven primarily by China and India on the back of domestic downstream demand. The US benefited from Section 201 tariffs, but only in respect to module assembly expansions and relatively small new assembly plant plans from the leading SMSL.

A significant increase in thin-film expansion plans, specifically in China, driven by one company, Hanergy, provided a surprise revival, notably for CIGS technology.

The return of module assembly announcements that far outpaced those of dedicated solar cell expansion plans was a key highlight.