Shifting solar power for several hours using flow batteries will quickly become economically viable if the energy storage systems are also allowed to provide other services, such as grid-balancing, one maker of the devices has claimed.

At present, flow batteries, which store energy in tanks of liquid electrolyte, have a higher upfront cost and are bulkier than lithium or lead acid devices. However, they are able to store energy for much longer and to undergo deep cycling – to go from fully charged to empty and back again – without risk of degradation or ‘thermal runaway’, which can cause lithium-ion batteries to ignite.

Scott McGregor, CEO of UK-headquartered RedT, one of a handful of makers internationally which are trying to bring a commercial product to market, told Energy-Storage.News that while his company “proved” the technology could work as far back as 2012, developing production techniques and scale to offer flow batteries at an attractive cost has been a challenge for all manufacturers.

“Storage is not an asset someone buys because they think it’s pretty. People buy it because they want to either save money or make money, it’s an economic proposition,” McGregor said, adding that he believed RedT’s second generation product, out later this year would be launched at a “very commercial market price” for 300kWh and 20kWh units.

RedT has already produced 18 units of its first generation batteries, some of which are already in the field. Among those projects are a wind energy integration unit on a Scottish island and solar-diesel hybrid off-grid installations in Africa. McGregor said that while many customers and potential customers of his wanted the storage to store renewables for similar applications in grid-connected regions, the economics are harder to make work, unless battery operators and owners are able to “stack” revenues or benefits of the systems.

“Customers want the storage but until the technology and the costs come right, it’s not there to buy,” McGregor said.

A report from sustainability group Rocky Mountain Institute last year found that battery-based electricity storage could provide some 13 grid services at behind the meter i.e. customer-sited, locations. The report, ’The economics of battery storage’, said that it should be a “high priority” for grid operators, regulators and utilities to create business models that “take advantage” of the way in which battery storage could be used to provide a number of network services, alongside a primary service to the individual such as solar smoothing.

Without this stacking, RMI argued, “energy storage systems deployed for a single customer-facing benefit do not always produce a net economic benefit”.

The RMI report also said that since customers were likely to want to deploy various scales of batteries for their own use in future, grid and electricity supply organisations should seize that opportunity to also make those behind the meter devices work in front of the meter. In an interview with Energy-Storage.News at the beginning of 2015, energy expert Melissa C Lott said that benefit stacking could be “key to the value proposition of many storage systems” and could help energy storage as a whole overcome some “crippling challenges”, while US regulator FERC has launched its own drive to find out how transmission operators see the role of energy storage in the network.

“You would never buy a flow battery for an application where you only require half an hour’s storage. A flow battery is not economic on a power basis. There are much cheaper forms of [storage for] backup or short-term grid services…

Read the full interview with RedT's Scott McGregor at Energy-Storage.News

RedT will be among the attendees at Solar Media's Energy Storage Summit at Twickenham Rubgy Stadium, London, on 28 April. The event – featuring 40 high-level speakers and three streams (residential, commercial and utility scale) – will address all the key issues related to storage deployment. 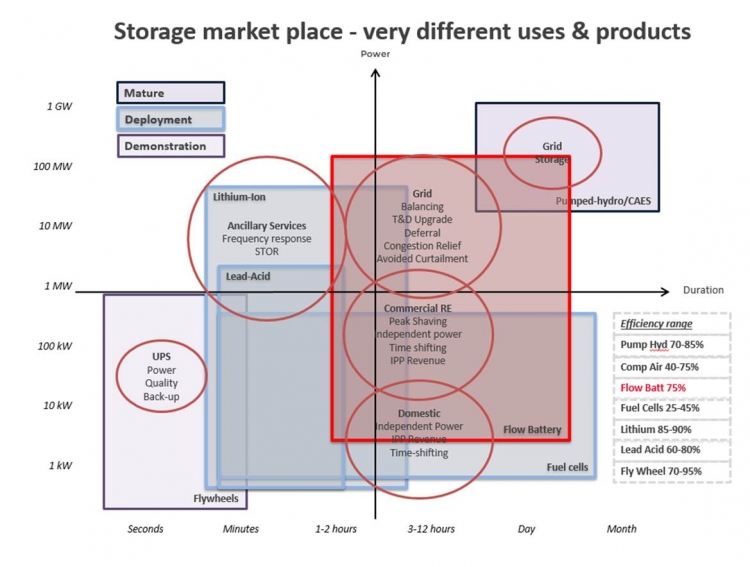