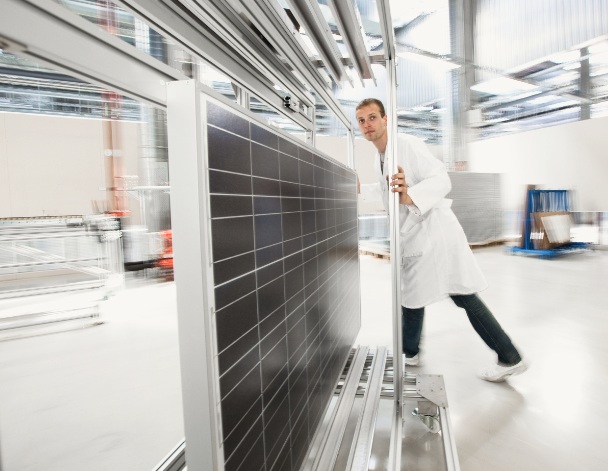 Yesterday, we exclusively revealed the top-10 solar cell producers for 2016. In the second part of our top-10 series, we can now reveal for the first time the top-10 module suppliers to the solar industry for 2016.

Yesterday’s feature explained the relevance of the top-10 lists covering both solar cell production and module supply, and why these are both different and revealing in their own ways.
A more comprehensive list of module suppliers to the solar industry is included in the January 2017 release of our PV Manufacturing & Technology Quarterly report, including also the geographic module supply segmentation for each company.

CTOs and heads of R&D from nine of the top-10 module suppliers are poised to talk at the PV CellTech conference in Penang, Malaysia, 14-15 March 2017.

Who made the cells and modules though?

The top-10 list for module suppliers to the PV industry is shown below. By a clear margin, JinkoSolar succeeded in what appeared to be a long-standing objective; be the number one in the solar industry for module supply.

As noted in the top-10 cell producer blog yesterday, the rankings are provisional, with full reporting and revenues to be given for Q4’16 and full year 2016. However, we do not expect any major changes to the list above, especially not from the top ranking companies shown.

While 12 months of marketing collateral will undoubtedly ensue from the number one company JinkoSolar, business models in the solar industry rarely have a lifespan of more than 12 months and to remain in the leading position here, the company will certainly need to look somewhat different going forward, compared to today.

However, what is clear from JinkoSolar’s rise is the degree to which the company has excelled in global sales and marketing activities, in a way that no other Chinese based solar company has done before. It is potentially the one thing that can keep the company at the top of the rankings for some time: in contrast to other solar companies that achieved number one shipment ranking but were then left exposed and debt-ridden as soon as market circumstances changed. 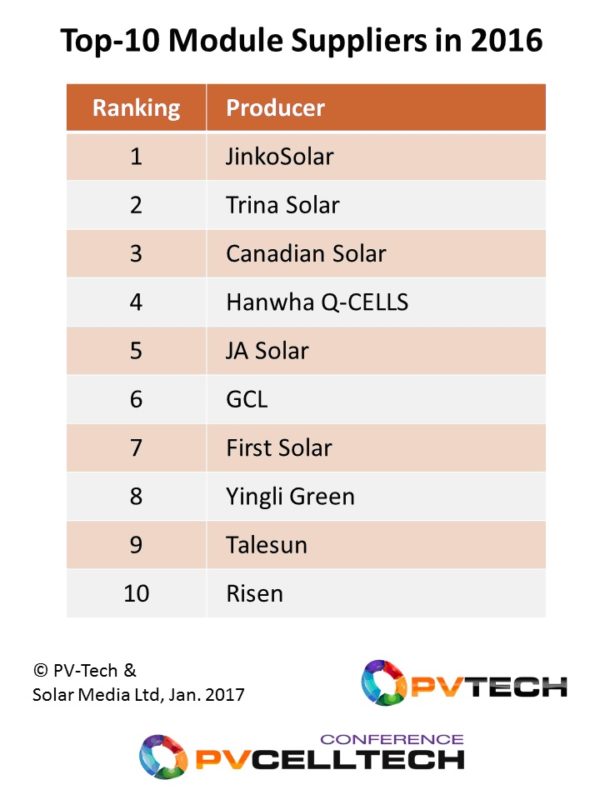 Collectively, the top-10 module suppliers shipped just over 50% of all modules during 2016. However, while this would at face-value look like there was some form of manufacturing consolidation taking place, think again.

Just over one-third of the cells used in the shipped modules from the top-10 were made by the companies different to the labels that ultimately appeared on the modules. This percentage increases again, if we remove First Solar from the analysis, as the only company that by default is 100% in-house produced.
There are several reasons for this. The rush to expand shipment levels quickly year-on-year, as in the case of JinkoSolar, can only be done by having third-party supply on hand at short notice. In addition, most companies wanted to grab market-share in the US and this could only be done by using cells and modules made by partners in Southeast Asia.

While we know about the strong capex into new facilities in countries such as Thailand, Vietnam and Malaysia, getting these new fabs into mass production has proved more challenging than was originally envisaged.

Simply sub-contracting module assembly routes from Southeast Asia to acquire cells from Korea, or exploiting Taiwan-based production lines moved abroad was an easy solution to ship branded modules to the US.

What will change in the next 12-18 months

Right now, everything is pointing to JinkoSolar being the leading module supplier in 2017, as discussed briefly above. It would take some pretty severe events to change this prediction, and we touch on some of these possibilities below.

In fact, we are forecasting nine of the Top-10 from 2016 to make up the list announced 12 months from now. The only new entrant is expected to be LERRI Solar.

There are two short-term issues that may change things in 2017 and 2018. These are now discussed.

The first relates to shipments to the US market. Right now, there appears to be a silence on the implications that may unfold upon global module supply channels, arising from changes expected from the President Trump reign.

Initially, there seemed to be a somewhat blasé dismissal in public from the leading module suppliers when the US election results were announced, clinging to the climate-change-will-win-the-battle mantra, not just today, but ad infinitum.

It now appears that the solar industry will not have to wait the first hundred days to see what is in store. The prospect of the Mexico effect being morphed into a revised anti-dumping petition related to Chinese product being outsourced to certain countries in Southeast Asia, to get around existing anti-dumping legislation, surely cannot be discounted. However, this may be more an issue from 2018 onwards.

The other key variable in the mix comes from China.

If we were to extend the top-10 module supplier analysis to the top-20, or even the top-30, a whole list of China-centric midstream production companies would emerge. The main reason for this is the domestic Chinese market, but secondary factors prevail in abundance, and there are many to list.

For starters, we have the Chinese cell and module manufacturers that were formed years ago to hit the mainland Europe FiT markets, prior to MIP. Most of these companies hibernated when Germany and Italy collapsed, and the EU stepped in, but were then reborn as local opportunities unfolded in front of them by virtue of China’s domestic PV deployment ambitions.

Directly related to this is the fact that many of these companies are not internationally savvy, and their raison d'être is inextricably linked to the autonomous job-count statistics of regions across China.

Does China want to have its own indigenous loss-making solar eco-system merrily installing 20-30GW per year: invisible to the outside world; making everything from polysilicon to modules; using local financing and EPC services?

Surely not; and when this is forced to change, then at last we will lose many of the lower tier producers and module suppliers that have been able to carve out a domestic existence in the world’s largest end-market of the past few years.

Over the next few weeks, we will be looking at further details regarding the type of modules supplied by the top-10 companies, and the industry as a whole. This will include more of the data and graphics that form part of our PV Manufacturing & Technology Quarterly report release from January 2017.

The research findings will also frame the context for the presentations and panel discussions that will form the basis of the topics to be covered at the PV CellTech conference in Penang, Malaysia, 14-15 March 2017.