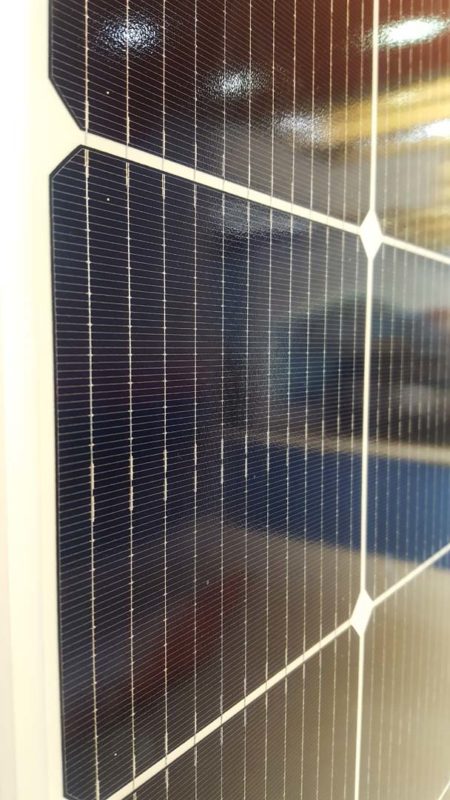 By carefully tracking the main contenders during 2018, this gives us a good idea of what the top 10 will look like, but when we get initial (unreported) confirmation during January, there are always a few surprises.

The counting in the past couple of weeks did not disappoint, and while the industry leader for 2018 was largely known from the start of the year, a few contenders did perform strongly during 2H’18 which is confirmed by the rankings list shown in the article here.

Some others – more reliant on China for shipments – suffered more during 2H’18 owing to the reset that occurred after China-531, and especially those module suppliers lacking access to overseas markets, being cash-constrained and with no Southeast Asia manufacturing to utilize then.

Before we get to the top 10 listing shown, it is essential to understand what ‘module supply’ means, because this still remains broadly misunderstood in the PV industry today. Even when we check companies for numbers, we find we are having to constantly explain to them what module-shipment really means!

Ranking the module suppliers purely on branded end-user (whether in-house EPC or third-party installer/EPC) shipments has become increasingly harder in the past few years, with an uptick in both module tolling (where production numbers do not translate to shipment figures) and the use of rebranded OEM module outsourcing (which count as module supply).

For example, some multi-GW module producers in China may have ‘produced’ very high levels of modules, but shipment numbers are markedly lower owing to these companies being used heavily on a tolling basis by peers in China that have access to module sales pipelines to downstream outlets. Using underutilized production lines as a tolling service for other companies does not count as a module shipment!

This is also relevant for some module producers today in Southeast Asia, in particular, Vietnam, as it has always been for contract modules manufacturers like Flex (formerly Flextronics), Celestica and Jabil, to name just three.

Similarly, other companies in China that have global brand recognition, or have downstream operations that drive the need for in-house branded modules – and who lack readily available owned cell/module operations outside China – typically have module shipment numbers much higher than in-house module production levels (or indeed any nameplate of effective module capacity levels).

In fact, looking across the top 20 module suppliers for 2018, almost every c-Si player (19 of the top 20) is subject to the above two caveats when ranking module supply figures for the year. By default somewhat, First Solar remains the only (top 10) company that can lay claim to having 100% own-produced module supply.

Another challenge in rankings relates to the numbers being reported (or not) by PV companies these days, particularly in light of the current trend of delisting from non-Chinese stock exchanges where the expectation from western observers for production clarity tends to be far greater than any other reporting channels.

Ultimately, the methodology behind all companies’ shipment levels has become rather bespoke, even for the ones that are still releasing MW or revenue numbers on a quarterly basis on NASDAQ or the NYSE for example. Some companies also like to quote a-sum-of-all shipments (wafers, cells, modules, and tolling services), which misleads certain third-party observers each year.

Thankfully however, the delta between the top-10 and then to the nearest number-11 is modest, meaning that the current (preliminary) ranking shown below is probably the final and correct version that will unfold over the next 3-4 months as reported data of sorts trickles out into mainstream press and social media outlets. We will correct any changes in a few months of course.

The top 8 are pretty much known with high certainty at this point; the final two entries are likely correct, with any other lists probably not differentiating between the various categories outlined above (in particular module-only numbers and tolling services).

For reference, during 2018, the top 10 module suppliers shipped nearly 60% of all modules to the industry.

And finally, here is our estimate of the top 10 module supplier ranking table for 2018: 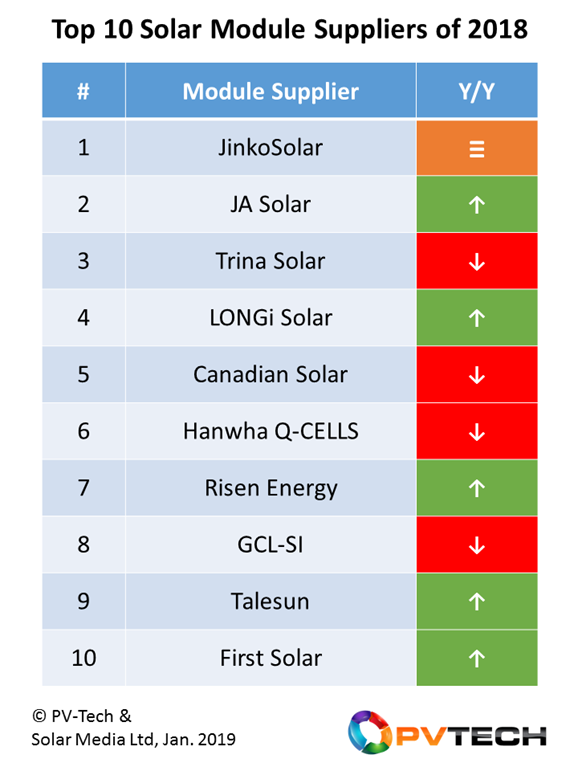 Commenting on the top 10 companies

While JinkoSolar’s position as leading global module supplier during 2018 was barely in doubt during the year, the most interesting changes were seen across the remaining companies in the rankings table above.

JA Solar established itself as JinkoSolar’s closest rival globally, with the two companies having made strong investments into mono PERC and being firmly committed to Southeast Asia manufacturing hubs to complement Chinese factories.

Trina Solar saw its ranking fall in 2018, as the company went through a year of adjustment coupled with cost savings exercises. However, a strong second-half maintained top 3 status for the company.

LONGi was another winner in 2018, with a strong company focus on seeking non-Chinese module supply growth in most major end-markets. This strategy is expected to continue during 2019.
Hanwha Q-CELLS saw its ranking fall in 2018, with the company adjusting to previous Section 201 implications for US shipments, technology upgrades to lines in China, and a less ambitious growth trajectory that overlapped with its going-private actions during the year.

Risen Energy made strong gains in 2018, driven largely by highly effective downstream project activity across Asia that puts the company on a par with Canadian Solar in the grouping above.
GCL-SI maintained top 10 status, but the company’s non-China operations is still a work-in-progress, with all capacity still located in China.

Having been just outside the top 10 in 2017, Talesun is a new entrant to the global top 10 listing for 2018. The company had been one of the first multi-GW capacity Chinese-based companies to focus on non-domestic business (similar to Risen Energy) and its inclusion in the top 10 in 2018 should not come as a surprise.

Finally in the top 10 rankings above, First Solar remains the only non-Asian and only non-c-Si based company to feature. The company went through most of 2018 with sales demand outstripping module supply, allowing the company to control the phasing of Series 4 and Series 6 line utilizations and ramp-ups.

Just outside the top 10 there were other multi-GW module producers, some of which produced more modules than companies in the top 10 list, but were often used as tolling sources for other companies, pulling down their final estimated module shipment figures.

When we come to review the top 10 module suppliers in 2019, do not expect too many adjustments; rather some internal reshuffling. In fact, it is likely nine or the top 10 will almost certainly be in the top 10 for 2019, with the top 6 the same.

Like 2018, the top 5 are likely to be all Chinese companies, depending on whether Hanwha Q-CELLS has a successful rebound in 2019 or not, with Jinko’s #1 status again simply not in doubt.
First Solar is expected to move further up the rankings, but this depends on the success of Series 6 during the year.

Of course, aside from being a dream for marketing teams looking to claim leading-supply status or show Y/Y progress, shipment-by-MW-volume is just one part of what really matters in 2019. Module ASPs, cost-structures and profit margins reign supreme of course.

But for those multi-GW players that are satisfied with 10-15% gross margins, then the more product that ships, the better.

Perhaps again, leading multi-GW status in 2019 will owe a considerable part to being one-step ahead of the industry when enacting flexibility in the use of in-house and third-party suppliers, having the correct balance of cell/module capacity inside and outside China, and always offering the optimum performing product to each key global market at ASPs that work also for key customers.

Many of the top 10 module suppliers will be outlining their in-house cell production roadmaps at the forthcoming PV CellTech 2019 event in Penang, Malaysia on 12-13 March 2019.

In the past, companies that stepped up module shipments to lead global rankings often did this at the expense of in-house cell R&D. Therefore, for those looking to see which of the top 10 module suppliers are also cell production leaders in 2019 and beyond, PV CellTech 2019 should offer key findings in this regard.

To register to attend PV CellTech 2019 in Penang, Malaysia on 12-13 March 2019, please follow the links at the event website here.