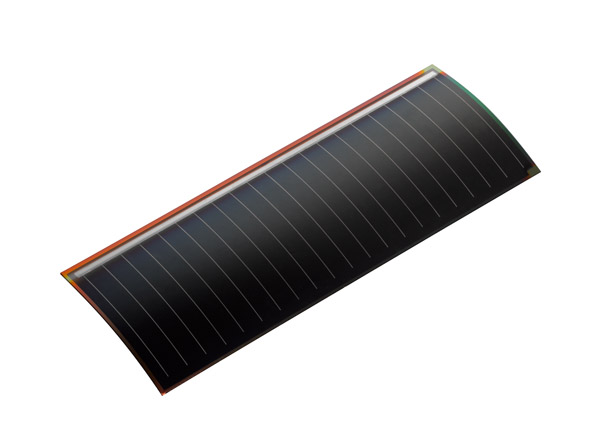 When the US Naval Research Laboratory (NRL) selected Alta Devices, a Hanergy Company, as the solar solution for the prototype Hybrid Tiger UAV (Unmanned Aerial Vehicle) Project, I decided to see what I could find out from NRL. After some discussion, an NRL spokesperson said:

“Due to sponsor considerations our lab is not inclined to discuss Hybrid Tiger. However, NRL's Solar-Soaring UAV uses photovoltaic technology and we are very open to discussing its capabilities.”

Sponsored by the Office of the Deputy Assistant Secretary of Defense for Operational Energy and the US Marine Corps Expeditionary Energy Office, the Hybrid Tiger Group 2 UAV project integrates Alta’s high efficiency solar cells, a hydrogen fuel cell, and autonomous cooperative soaring algorithms to achieve over 3.5 days of flight endurance, even during the winter solstice at up to 50° north latitude. According to Jane’s last year, Hybrid Tiger will be powered by the hydrogen fuel cell at night and solar cells during the day while carrying a small surveillance and reconnaissance payload, and first flight was expected last month, May 2018.

Another wing set using Sharp IMM cells was still in process at the time of the paper.

Without solar, the PV-SBXC UAV can fly about four hours using the 400 Watt-hour, 1.91 kg battery pack arranged as six series by six parallel (6s6p) Panasonic NCR18650B batteries. Each of the wing sets was ground tested and test flown for at least one hour. Extended endurance test flights for SunPower and Alta Devices have only been reported by NRL thus far. All the tests were flown with a fixed rectangular pattern and altitude range, and the autonomous soaring software algorithm was disabled for the two endurance flights to determine solar performance though passive soaring was permitted. The endurance flights began near sunrise with the batteries charged to at least 90% state of charge (SOC).

With the SunPower wing, the PV-SBXC UAV flew for 10.9 hours and about half of the power used during the flight was generated by the solar wing not including passive soaring. The SunPower flight benefited from two one-hour periods of thermal soaring and 40% of the flight was spent with the motor off. Correlated to a second SunPower wing on the ground, the UAV wing generated about 10% less power perhaps related to MPPT (Maximum Power Point Tracking) adjustments during aircraft motion and orientation to the sun.

The PV-SBXC UAV with the Alta Devices wing flew for 11.2 hours, and the solar wing generated almost two-thirds of the power used during the flight without any benefit from soaring. Correlated to a second Alta Devices wing on the ground, this time the UAV wing generated about 15% less power perhaps again related to MPPT adjustments during aircraft motion and orientation to the sun but also the higher Alta Devices array voltage. Alta Devices further outperformed by using only 66% of the battery capacity versus 89% by SunPower.

“The experiments confirm significant endurance gains are possible by leveraging thermal updrafts and incident solar radiation, rather than ignoring these free sources of energy. Future testing will focus on quantifying the trade space between improvements in solar cell efficiency and combining with autonomous soaring for improved solar-recharging.”

Alta Devices has proposed a new metric, the Solar Performance Index (PUAV), seeking to rank solar technologies by capturing the dual concerns of power per unit area and power per unit mass in UAV designs. PUAV is defined as the square root of the product of the power to mass ratio, Pm, and the power to area ratio, PA.

Pm is the power to mass ratio (Watts/kilogram)

PA: is the power to area ratio (Watts/square metre)

The units of PUAV work out to be Watts per the product of metres and the square root of mass and do not have a physical meaning other than translating a plot of the power to mass ratio versus the power to area ratio into a single index value.

I calculated the Solar Performance Index for cells from SunPower, Alta Devices, and SolAero in tabular and bar chart form as shown below with a few caveats. 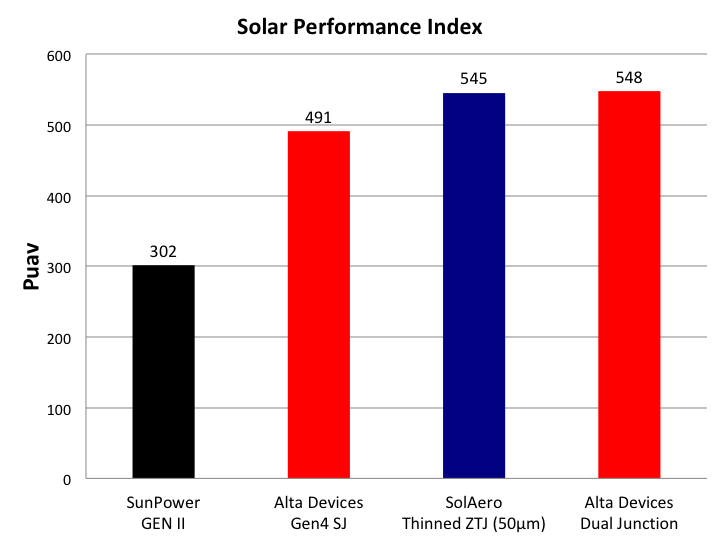 Alta Devices and SolAero GaAs cells would be preferred in UAVs when endurance and weight are paramount and price is secondary.

Alta Devices high-efficiency, thin-film GaAs solar cells are 100% made in the USA at their Sunnyvale, California, facility. Over the next eighteen months to two years, Alta expects to reach around 3MW of production capacity maxing out the available space and permitted capacity of the building. Alta is considering other locations for future expansion based on market demand or collocation with potential large partnerships.

Alta has been using their own design MOCVD reactor and is in the process of commissioning over the next few months their latest custom designed MOCVD reactor described as much bigger than anything available. Alta’s MOCVD reactor is optimized for gas material utilization and the area based deposition required by solar cells. As a result, Alta has simplified the reactor design compared to commercial MOCVD reactors used for laser and LED production.

Alta developed another large tool to handle ELO or separation of the Gen4 GaAs thin-films from the wafer with high yield and high throughput. Alta did not disclose the current average number of lifts per wafer; wafer reuse is critical for ongoing cost reduction and capital equipment improvements.

And the Matrix Assembly tool, fed from a cell magazine, builds customized solar modules to match customer requirements via serial and parallel cell configurations. In the typical UAV application, the cell matrix built by Alta for customers includes top encapsulation for direct integration into wing materials such as carbon fibre or metal.

When I asked Alta Devices about thin-film solar cell pricing, I wasn’t sure I would get a response. However, Alta said the solar cells are UAV market value priced lower than substrate based multijunction solar cells offered by Boeing Spectrolab and SolAero, for example. At this time, Alta’s capacity is sold out to projects driven by the growth of their aerospace business.

Alta Devices future ambitions extend to the automotive market where much more competitive pricing will be required to enable range extension though still at a premium to high-efficiency crystalline silicon solar solutions.

Solar is poised to become a standard feature on low altitude UAVs with any reasonable surface area, typically wings, to extend endurance or increases payloads or both.

Boeing Spectrolab declined to discuss the application of their multijunction solar cells in UAV applications.

6 June 2023
Join us in Napa to unlock the key to reliable PV module supply to the U.S. market in 2023 & 2024. We'll also be gathering the main players in the US solar market for some wine tasting!
alta devices, drones, epitaxial liftoff, gallium arsenide, hanergy, thin-film, us, us navy