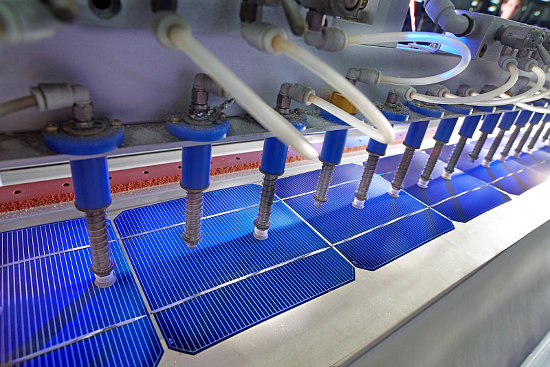 Solar cells produced using p-type multi c-Si wafers retained their dominant market-share position in 2016, despite significant investments into p-type mono and advanced cell production, such as PERC. The transition to increased mono wafer use is now expected to be seen more clearly during 2017 and 2018, but depends still upon the relative end-market demand from the domestic Chinese market.

The split between p-mono and p-multi has never been more topical and of relevance to the solar industry, over the past 12-18 months. In fact, this essentially set the basis of the agenda for our forthcoming PV CellTech conference in Penang, Malaysia on 14-15 March 2017, where CTOs and Heads of R&D from the leading wafer and cell producers will be on stage discussing this very issue.

Ultimately the data simply comes from looking at the volumes of ingots, wafers and cells produced across the year, and the make-up of the modules being shipped through downstream channels.

Alongside our forecast out to the end of 2018 (still critically dependent on China manufacturing and China end-market demand levels), the data is shown in the graphic below. Here we segment into standard (full Al-BSF rear side) and advanced cell types (completely dominated by PERC now), and include also all n-type configurations as a single category for illustration purposes. We further show thin-film, of which more on this further into this blog. 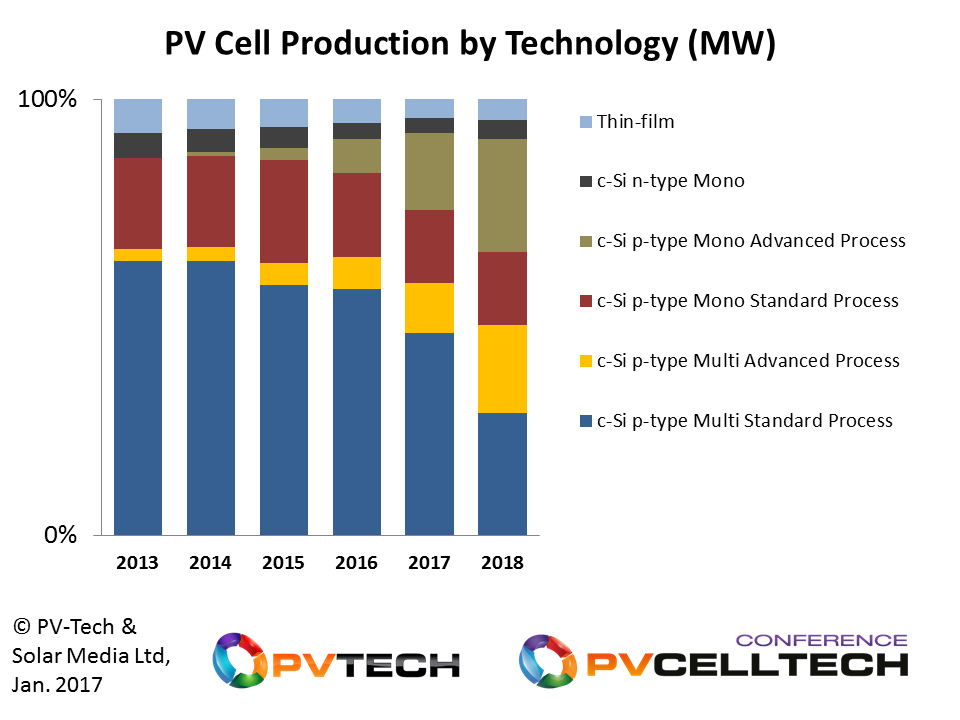 What is far more interesting is the ‘why’, and understanding why p-type multi is holding out, despite all the improvements to mono wafers, being totally driven today by LONGi Silicon Materials. Let’s try to explain.

The first thing to remember is that the most powerful PV manufacturer in the industry today, GCL (including Poly and Systems Integration, across poly-to-module), is top-heavy on p-multi and ships so much more wafers than anyone else.

Also, market-shares are only relative metrics. Both p-type mono and multi have increased significantly in volume in the past couple of years, in a market that has grown so much that companies specialised on each technology have not been short of opportunity.

This comes over in the graphic above, by looking at the declining share from n-type and thin-film as the differentiated ‘non-p-type’ grouping.

But in terms of p-type multi and China, much of the Chinese module supply in 2015 and 2016 was from Chinese cell/module manufacturers that basically came back from a state of passive existence and then added low-cost locally-sourced production equipment to expand. Those expansions and subsequent supply were weighted to the low-cost option, p-type multi.

Moving away from China, other factors in Southeast Asia have kept p-type multi production high. This includes the impact of one company: Hanwha Q-CELLS. The other factor is OEM production, and a new world of Southeast Asia production, that is different to the historic OEM supply climate in which companies like Flextronics, Celestica and Jabil were prolific.

OEM cell production, covered in a blog yesterday on PV-Tech, is seeing increased cell capital expenditure (capex) and attention now, especially in Thailand and Vietnam. During 2016, an incredibly high percentage of this production ended up in the US as 72-cell p-type multi modules, branded by one of the major module suppliers to the US market.

Lastly, we have India, and a market where p-type multi is very much at home.

It would be somewhat naïve to assume that the Chinese government, simply by having its Top Runner or Super Top Runner carve-outs, is going to force this change. In GW terms, this would be relevant in any other market globally, but not when the country adds more than 25 GW in a single year.

What will force the shift however is a scenario that many don’t want to happen, but inevitably will: the collapse (again) of lower tier ‘me-too’ Chinese cell and module suppliers. It seems that only China staying at a 25-30 GW market will save them, and even then, it is likely that there would be a local supply/demand dynamic that would cause self-implosion.
Let’s look at one option now.

Let’s consider that the China end-market softens 2017 and 2018, although remember a softening market means job losses and this is not a China mantra. However, should this happen, the Chinese cell and module makers that have no way to serve most of the global footprint then all shift to getting rid of product (at any price) in India. This sustains Indian module ASPs at rock-bottom global levels, as the first country to be selling below US$0.30/W in Q1’17 and hitting US$0.25c/W mid-year.

And then finally, we possibly have the hibernation of this China cell/module group, and a large chunk of the p-type multi supply is removed from industry participation.

Now, factor in p-type mono improvements, the rapid upgrade path to PERC, and all the other developments being done today by the leading wafer and cell producers to move cell efficiencies higher in mass production, and we get the possibility of a much higher rate of transition to p-type mono variants by the end of 2018. This is what the graph shows. It is only one scenario, but right now, I’ve yet to come across a better alternative forecast for cell manufacturing.

What about n-type and thin-film?

Aside from SunPower, LG Electronics and Panasonic, n-type growth is still more talk than action. Yes, there are moves from GW pretenders, but what’s new here? The list of casualties that have tried and failed is almost as big as that from thin-film. And what about thin-film?

The industry is well aware of what First Solar is proposing to do over the next few years, and the company has been transparent in this regard and has an impeccable track-record in moving R&D into volume production which no other company in the solar industry can match.

Less so is known about the one other thin-film company of any standing today, Solar Frontier. It remains to be seen how Solar Frontier will justify continued Japan-based manufacturing in a world of sub 30c/W ASPs, and declining opportunities from its domestic safe-haven end-market, especially when the company’s thin-film manufacturing has been loss-making for many years.
That said, thin-film capex is on track to exceed over US$1 billion in the next 2-3 years, which is interesting considering that thin-film’s share of PV production will be at an all-time low of just 4% in 2017. Money is flooding in from China for CIGS and CdTe, with the country’s previous showcase thin-film advocate, Hanergy, surely calling time on a-Si based activities for the solar industry.

Following the announcement from First Solar a few months ago to transition from Series 4 to Series 6 panel sizes, we took the decision to have a mini-session at PV CellTech in Penang, 14-15 March 2017, to assess the c-Si versus thin-film issue. This will include a presentation and panel discussion. Details on how to register to attend the event can be found here.