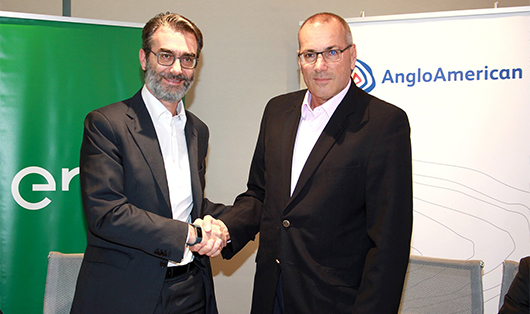 A mining giant has turned to Enel to power its transition to a fully renewable energy supply in Chile, signing a deal set to kick in two years’ time.

The developer announced this week its clean energy portfolio will provide Anglo American with up to 3TWh annually, starting in 2021 and over a 10-year period.

Contacted by PV Tech this morning, Enel declined to spell out which of its renewable installations are included in the energy supply contract signed by both firms.

However, this publication understands the energy will come from Enel’s existing renewable portfolio in Chile, developed through the Enel Generación Chile subsidiary.

The deal will help green the energy footprint of the Chilean projects Anglo American owns interests in, including the Los Bronces, Collahuasi, El Soldado mines and the Chagres smelter.

The mining group estimates the potential 3TWh a year in renewable supply will slash its overall Chilean CO2 emissions by 70%, equal to taking 270,000 cars off the road.

The firm, working to curb its worldwide greenhouse gas emissions by 30% by 2030, has tested a floating PV pilot at Los Bronces and sponsored World Bank climate-friendly mining schemes.

According to Enel, the deal with Anglo American is the most sizeable such arrangement seen to date in Chile and the largest clean energy supply agreement the firm itself has ever entered.

The developer claims to be the top power company in installed capacity terms in Chile, the country it chose as the location for its umbrella regional group Enel Américas.

According to the firm, renewables take up a 4.7GW slice of its overall 7.5GW portfolio, with installed solar (500MW) ahead of geothermal (50MW) but lagging behind hydro (3.5GW) and wind (600MW).

The group has been active on the solar front over the past few years, switching on 160MW and 97MW plants in the north and acquiring Sungrow inverters for a separate 400MW project.

Enel was also the chief victor of Chile’s renewable tender of 2017, reaping 1.180TWh of the total 2.2TWh on offer. In capacity terms, the auction awarded the firm 116MW of solar support.