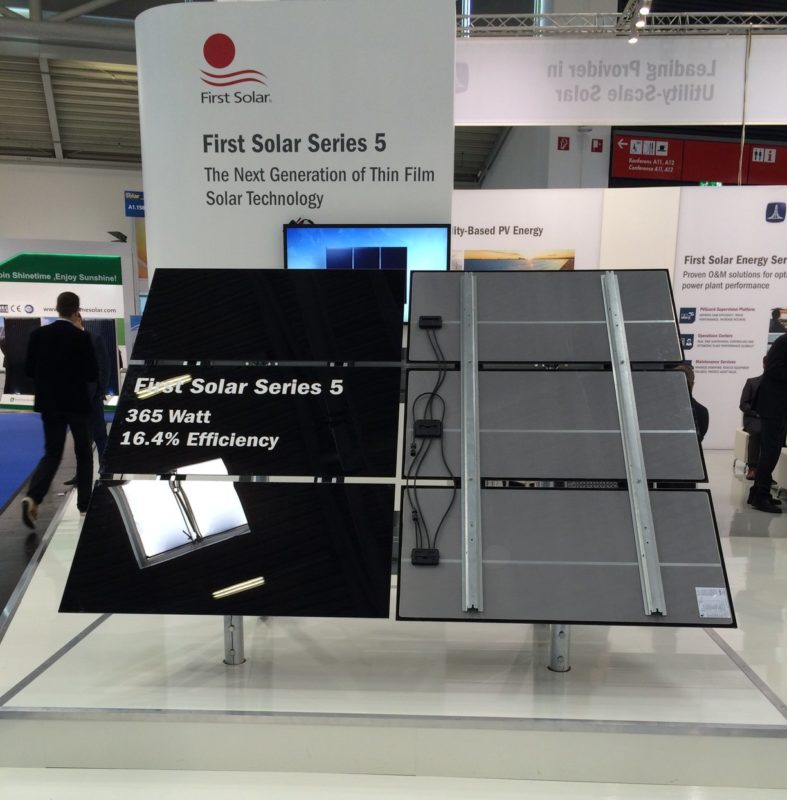 The Series 5 module is entering the market at 365W (Pmax) and consists of a 1.85 metres x 1.2 metres, three horizontal stacked module unit akin to the size and form factor of traditional c-Si 72-cell modules. Although it is comprised of three sections which look similar to the Series 4 module, Karim Asali, First Solar’s technical director for Europe, told PV Tech that the Series 5 is in fact comprised of “completely new modules”.

First Solar has plans to progress the module’s Watt capacity in future. “We will start at 365W and will progress to 370W and 375W and so on and will see according to the efficiency roadmap how it can go up more and more,” said Asali.

The updated module is new in several ways; the main way being its size. It is starting at 365W and 16.4% efficiency. “The main reason why we are introducing this starting mid-next year is to reduce the balance of system cost,” said Asali. “What does that mean practically? The specific cost of mounted structures will be about half of what we have today with our current module, and in the range of the majority of size-comparable crystalline modules.

“The second thing is that we will not need any clips and it is prewired which causes mounting costs to be a lot lower – the time of installation will be doubly as fast as we have in any crystalline technology,” he claimed.

“The balance of system costs is the main motivation [for updating], because reducing system costs is one of the key issues at the moment. The more the module costs go down, the more we have what is left on a system level to be looked at. That’s the idea. We are looking now at complete systems thinking ‘how do we reduce the costs?’ this is to a large extent the key thing.”

According to the company, the module installation time is at roughly two and a half minutes per kW – which is about double as fast as the average today. “Not only do we save on the material, but we have a module which has quite good efficiency comparable to the market and we have less installation time – this is the key point,” added Asali.

The new addition to the First Solar module offering underwent its first European outing at the trade show in Munich on Wednesday, and received a warm reception, exceeding the company’s expectations.

“This is the second day [of the show] and we are overwhelmed actually,” said Asali. “The interest has been massive. We have been constantly reprinting additional data sheets – we’ve never experienced that. The data sheets are finished; normally we have more than enough for three days but now in the first day everything is finished. So there seems to be a huge interest.”

As the module is anticipated to launch in the market mid-2017, it is too early to predict what uptake will be like. However, the company plans to use this year before the launch to “fine-tune the engineering”. The company is also currently working with a number of mounted-structure companies who are optimising their products for the Series 5 module.

“The thin-film we use is fully an IP of First Solar and fully owned by us,” said Asali. Production at the factory starts with glass, which ends up as a fully manufactured module in a record three to three and a half hours. “This is a very different manufacturing arena and procedure than you see in monocrystalline where you have to wait three and a half days. You can walk with the module from A-Z and see it finished in about three and half hours then packed and onto the market.”

First Solar has plans for the Series 5 module to be a global product and does not intend to target any specific country.