Pexapark is a renewables software platform specialising power purchase agreements (PPAs). The company outlined its outlook for the European PPA market in 2021 at the Solar Finance and Investment virtual forum this week, and predicts that PPA capacity volumes could exceed 10GW in the continent this year. We caught up with Luca Pedretti, Pexapark's co-founder and chief operating officer, to discuss how financial agreements are changing to accommodate more offtakers from a range of business sectors.

As the PPA market has evolved in Europe, we're seeing shorter structures becoming more commonplace, and also more sophisticated pricing structures. I'd be interested in your view on how you think that's going to evolve in Europe's emerging markets.

From the data we collect, we definitely can confirm that the structures have become more structured.

You have, as you pointed out, more baseload contracts, but you have also more options structure. That's a general trend which we see, and it's a sign of a market which has become more mature, in many ways now there are big regional differences, but overall this is a theme that definitely the data supporting.

On this first aspect the tenders are becoming more short bets. It's still marginal, though. According to our data, I would say it's a marginal aspect as there is still this general, industry way of financing where you have a single long term contract, enabling leverage. There are signs that this model is being seconded or changed, and not fully replaced, but that you are moving more to the balance sheet.

What do I mean with that? There are different players in the market, so we have the rise of the oil majors, which are mostly balance sheet finance. They would not have those requirements set typically by lenders for longer tenders, so they have much more flexibility in what they do. And they will not be required on long term PPA.

And then we see the same also on the financing side. You see new approaches where they say, “can we do more on the risk side on the financing side and keep some of the risk premiums in ourselves?” But I think that's something for the next two, three, four years, as this is developing as the standard way to this long term PPA approach. In some ways, it will be a great development for the overall renewable market, because if your business model requires a long term PPA, then this long term PPA becomes a bottleneck to the overall deployment of renewables, and that's something which is of keen interest to see how this develops and will be interesting to check back in a few years, but that's definitely on the rise.

Is there a potential difficulty that that could arise in the market with the fact that shorter PPAs are emerging, some of them half the length of PPAs that we've seen before? Prospective entities that you could form another contract with, that you could perhaps rely on to be able to fulfil that contract, are already tied into another agreement. Is that a potential struggle for developers trying to stay competitive in the market?

Well, in the end, the PPA is a tool to structure your cash flow and risk. So of course, if you leave more open by engaging in a shorter tender there is more risk, but also more upside. This then needs to reflect back on all investors if they are comfortable with such a profile. That's what we see changing because if you're a classical pension fund, maybe that's not what you'd be looking for. So that's something maybe more for oil majors, which have integrated value chain or utilities, integrating and doing the full value chain as well. And these are the interesting developments, which we are observing. 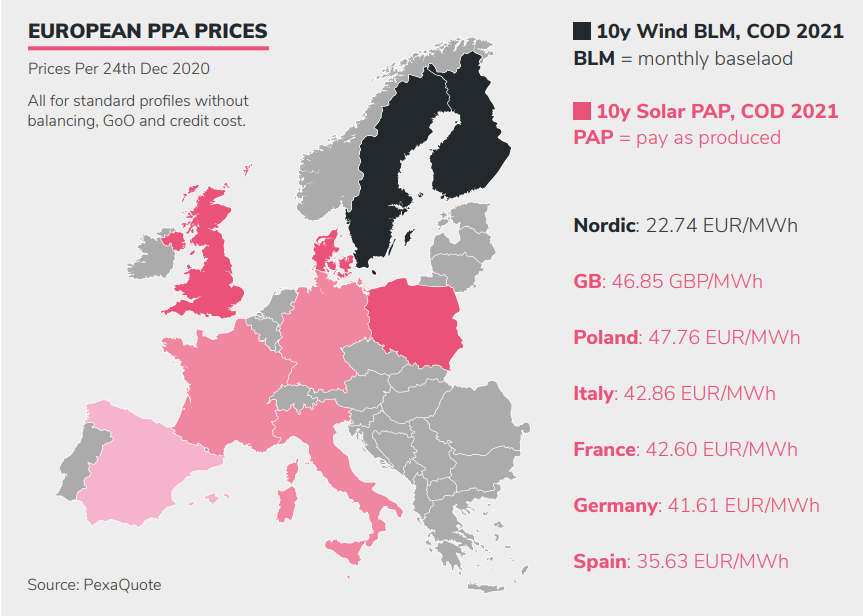 What would you say are the key differences we're starting to notice between more mature areas such as Spain, and emerging markets?

Definitely, there are big regional differences. First of all, price levels differ from market to market. So if you look at the Pexapark report on power pricing, Spain is in the €30s (US$36), whereas Poland is clearly above the €40s. And Nordics in this case, they are in the low €20s. Those overall price levels indicate whether there can be PPA or not. So there can be cases where there are no PPAs, regardless of the maturity of the market, just because it's market based, and sometimes prices are just not allowing for new investments. That's a first interesting feature. Then it very much depends. For example in Spain definitely solar is, in most markets, the most competitive technology. That's the reason why you see mainly solar PPAs in Spain, but in Germany, there is almost no onshore wind PPAs being done last year, and the main fact being that they require higher PPA price levels, and they were not given in most markets. It needs a few things to come together to make such a market based transaction happening.

We definitely see Germany as the biggest emerging market, and with offshore on the short term. For 2021 I would really say Spain's still will be ruling just in terms of volume, but you clearly see Germany coming up on the back of solar PPAs. Hopefully fingers crossed Italy, which is more a regulatory topic because they just don't get it down on the permitting side. If you were to look a bit further, I think offshore will dominate by sheer volume, because the project sizes are so big, but they will not have the big headlines, because the projects and the real volumes will only come in ’23, ’24, ‘25 so they will not be really in the media with big deals in the next year.

What do you think will make Germany such a competitive force in the market?

First of all, it's the most liquid market. It has plenty of tech. So you have 20 offtakers, which credit-wise can act as potential long term PPA providers. And to contrast that in many other markets, Portugal you maybe only have two or three, Spain, you have five to six or seven, in Italy three. And that's very important for the overall liquidity, the risk appetite that something can be done. And so there's a liquid market with many credit-worthy offtakers. The third aspect is that prices are right now sufficiently high that solar works without subsidy. So if these conditions continue, that prices stay at these levels we have, we will see deals and we will see projects. The only limiting factor is whether projects will be permitted, but in Germany, we wouldn't see any problem just from the offtaking world to do 4GW next year or 5GW, no problem whatsoever. Whereas if you would ask me, can we do this in a year in Italy, I doubt it because there is not a sufficient capacity there.

A lot of the PPA dominance we've seen at the moment has been on additionality and new deployments. How do you see this progressing in future?

According to our data, there are two big segments on the corporate side. There's one segment which has very, very high electricity costs. Think of steel manufacturing, aluminium, metals. They are extremely costly. For them, it doesn't really matter whether it's green or additional or not, but that those companies engage in renewable PPAs is a sign of that they have become cost effective.

Then there is a segment where it's all about green and additionality, and that's typical tech companies, or other companies where electricity cost doesn't play really a role. When you look at Google, they have substantial electricity needs. They pay €400 million a year on electricity bills for their data centres, but this is a fraction of their total revenue. They don't care whether they would pay €10 more or less, and industrials couldn't do that. This is interesting because when you look at Amazon or Google or Facebook, they're localising their data centres. Every country is getting its own data centres. It used to be very centralised, and they will close renewable PPAs regardless of the price level in the market. So Amazon is going to Italy, to Poland, to Germany everywhere, and they have said “we will buy green”, because it's ESG. It's required. This is driving new investment, and that's a very, very positive thing on the whole. It's not just related to the tech companies, because really sustainability investing, ESG reporting, this is really driving demand and it is visible on the ground. Some do say this is greenwashing and has no physical effect, but we can prove that this really leads into physical investments, so I think that's very encouraging.

Amazon are ruthless in how they tender, but they enable more technology, and more technology means lower unit costs, and the whole cycle continues. So this is I mean, just the figures, when you look at Pexapark’s figures, it has toppled from last year to this year, from 2019 to 2020 irrespective of what has been happening in the market like price volatility, COVID and all the things in the US. This is much bigger, but it's on the back of some tax credits. Whereas in Europe, there's no subsidy whatsoever involved, so this is very, very promising because it's just a self-driving machine based on low costs.