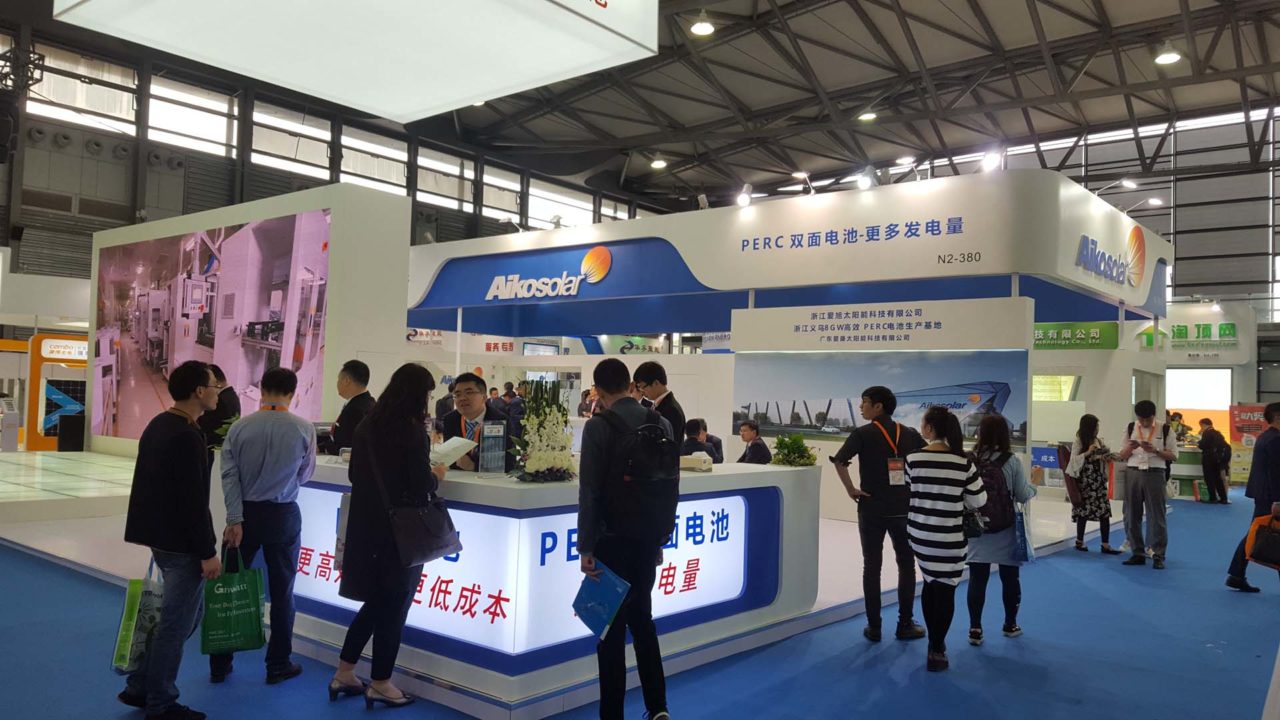 However, although some merchant solar cell producers have announced migration to PERC, these have been relatively conservative manufacturing capacity changes, which can include both multi and mono PERC cells. In other cases, some are migrating away from multi to mono PERC and even a sprinkling of IBC (Interdigitated Back Contact) and heterojunction (HJ).

The planned expansion by Aiko Solar is evidence of a wider shift to mono over multi for module manufacturers, which PV Tech recently highlighted in a blog from Finlay Colville, head of market intelligence at Solar Media.

Aiko Solar told PV Tech at SNEC that its new greenfield production plant broke ground ahead of the show and equipment orders were signed with a number of western suppliers on the morning of the first day of SNEC 2017, at the Aiko booth.

“We think the market is good and offers a huge potential for mono PERC in the future and is the key development trend over the next three to five years – even the next ten years,” remarked Vincent Lau, overseas sales director for Aiko Solar. “So we are ready to invest focused on this expansion.” The total investment will be RMB6 billion, divided into three phases of RMB2 billion each.

That equates to a total investment of around US$870 million and around US$290 million per phase.

“The first phase will be completed near the end of the year, in the fourth quarter of 2017. This will provide an available capacity of 650-700MW and will be mono PERC,” added Lau.

The initial Phase 1 plan of what will be an 8GW expansion is to be installed in a new manufacturing facility in an economic development area near Yiwu City, central Zhejiang province.

“The target is for all three phases to be completed by 2022,” noted Lau.

The merchant cell producer is also planning to convert its current 1.6GW of nameplate cell capacity in Foshan City, Guangdong province, to P-type mono PERC in 2017.

PV Tech recently profiled LONGi’s ingot/wafer expansion plans, while also noting that it was the fastest growing integrated PV manufacturer in the industry. LONGi is the key driver behind the mono push and has garnered significant supply deals.

However, the confidence from Aiko Solar also comes from a rapid improvement in  PERC cell manufacturing equipment, both from a process perspective and also productivity and throughput increases that enable lower overall production costs.

This has been a significant success story for equipment suppliers, notably western suppliers that have re-established themselves as key providers in this major technology buy-cycle.

According to Aiko Solar, partnering with top-ranking equipment suppliers has been essential in order to be competitive, as it starts the heaviest capital expenditure cycle in the history of the company.

The company has already launched its next-generation mono PERC cell range, which also includes a bifacial PERC cell recently featured by PV Tech. The advantage of bifacial PERC cells is that Aiko Solar believes there is almost no extra investment required to add these to its product offering, while a bifacial design combined with a double-glass module and an intelligent mounting system can increase power output by as much as 28%.