PV is increasingly becoming the cheapest energy source and therefore has become the energy source with the highest yearly capacity additions! Even in 2018, after some scepticism right after SNEC 2018, due to the announcement of the Chinese Government to stop supporting PV as intensively as in 2017, more than 100GW (109GW) has been installed worldwide (we actually bet a crate of beer on that!) and 125GW has been forecast to be installed in 2019.

This is also due to the fact that EU and MENA states are increasing their PV installations again. But this is only the beginning of PV, which is now taking off. In the next three years we will enter the “TW-PV-System era” and in 2050 60 to 70TW of installations are expected. Congratulations to all of us who are involved in R&D, manufacturing or any kind of business along the PV value chain! PV in the long-term will save our planet.

With our previous blog we wanted to create awareness about LeTID (Light and Elevated Temperature Induced Degradation) in PERC solar cells and modules, as such effects exist but many customers and even some PV specialists were not aware of these severe degradation mechanisms that are possible in new high-efficiency devices.

We believe that now that many more people are paying attention to this important issue, as in addition many blogs followed ours e.g. from Hanwha Q CELLS, LONGi Group (here and here), Canadian Solar and JinkoSolar, all writing about their LeTID free PERC products.

Indeed, Hanwha Q CELLS started working on LeTID free modules very early, similar to PID degradation, and collaborated with TÜV on tests to qualify PERC modules to be free of any degradation.

So as already mentioned, PERC technology provides a great and a simple possibility to achieve efficiencies well above 21% in industrial production which would not have been possible with standard (full-area) Al-BSF solar cell technology. With PERC technology having already been developed in many institutes before 2010, the pace of adoption has accelerated and is expected to completely replace the standard Al-BSF technology as the mainstream cell technology. We believe, similar to the projection of PV Tech (Fig. 1), that from 2021 onwards, no standard Al-BSF cell will be in volume production any more. 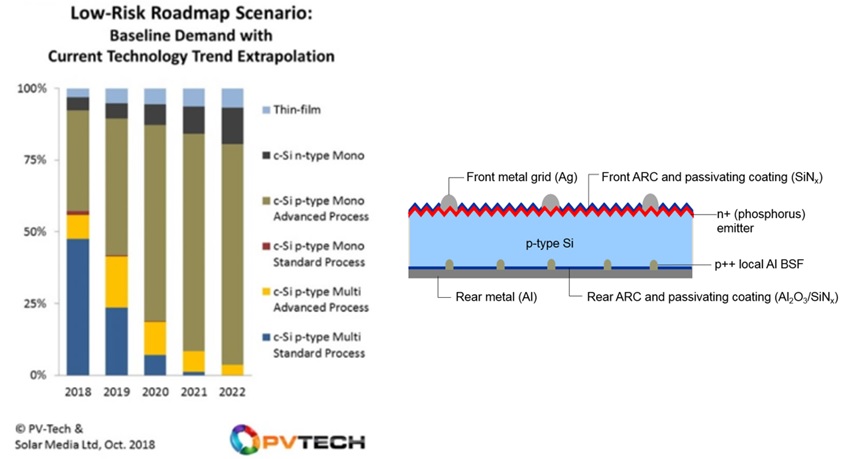 Current PERC average efficiencies in production are between 21% and 22%, with the higher efficiency ones already using selective emitters again, with champion cells even exceeding 22%.

There is currently a huge discussion and PR battle through announcements as to which technologies will become dominant in the post PERC world, while others are debating whether PERC still has higher conversion efficiency potential? Will nPERT at a certain point reach higher efficiencies? Will passivated contacts (often generally referred to as “TOPCon”) enter the PV market? Or will the market go disruptive with heterojunction technology (HJT)? However, as before it remains in the hands of key manufacturers as nobody knows for sure what technology will become dominant, which explains why the “battle” is ongoing.

What is striking our attention over the last 3-4 years, has been the high-efficiency solar cell announcements from large Asian companies, which started with Trina Solar but has been continued by the likes of LONGi Group, JinkoSolar, Kanneka, Hanergy Group and others.

Before 2010, when solar cells were still produced in volume quantities in Europe, such “showing muscles” was mainly played by European Institutes and also partly by industrial cell manufacturers located in Germany. However when you took a closer look at the announced solar cells structures you very quickly realised that there were always some “tricks” applied to the champion cells: while the champion cells from the institutes where often fabricated on very small substrates (sometimes even a small device implemented on a larger substrate, like a microchip on a wafer), the champion cells from the industry often where not usable in a real PV module, e.g. due to missing edge isolation or they were fabricated using plating or other metallization techniques that even today – more than eight years later – are not used in mass production.

As highlighted in the table below, we have summarised a list of tricks available on how to modify an industrial-scale solar cell process in order to achieve significantly higher cell efficiencies, but at the expense of actual industrial feasibility.

In summary, there are many champion cell press announcements around – even from industrial cell manufacturers – that demonstrate capabilities of respective R&D divisions when using their laboratories and advanced pilot lines but rarely give any indication when (and if ever) the related technologies would be implemented with similar efficiencies into industrial production.

Only the Pmpp at STC of the best actually commercially available PV modules (taking into account the actual wafer size that has been used: 5-inch, 6-inch with M0, M2, M4, et al) allow to deduct the top cell efficiencies that are currently feasible in industrial production.

What next with or after PERC?

The biggest question currently is what will happen with or after PERC? Does PERC still have potential to reach efficiencies well beyond 22%? Will passivated contacts enter the market in the coming years?

A recently published article suggested that TOPCon and HJT cell technologies would take over the n-type market in the coming years. Although this is possible it would also contradict our understanding from 25 years of industrial PV cell development.

Only SunPower and Panasonic were going the “revolutionary way” in the past, putting the focus on highest efficiency processes (based on passivated contacts and HJT, respectively) serving the higher costs markets. Then LG Electronics also entered this segment.

However, we are seeing that SunPower is increasingly shifting more of its production capacity away from the IBC high-efficiency segment to a more standard (double-sided contact) cell technology, as the modules are processed with standard techniques, which are coming closer to the module power outputs traditionally offered by them.

Companies such as Jolywood, REC Group and a few others are claiming that they are going into mass production with n-type technologies using passivated contacts. However, to our understanding there are still many issues that need to be resolved, such as production throughput, homogeneity, yield, metal paste contacting and overall module production as they are not yet at the same level of maturity as standard technology.

It should be noted that a 23% cell conversion efficiency with a Voc of 700 mV can be still reached by the optimization of standard n-type BBr3-diffused nPERT technology (MoSoN- Monofacial Solar Cell on N-type) using low-cost advanced Al-paste metallization (creating selective B-Al emitter), as recently published by ISC Konstanz*.

In that way, also the efficiency of our low-cost IBC “ZEBRA” cell concept would be pushed to 24% efficiencies and beyond without the need of any “hocus pocus” process steps and even before the need to introduce passivated contacts into the process sequence.

We expect that passivated contacts will need to be used on both sides of the cell (or both polarities in IBC concepts) of the solar cell in order to lead to cell efficiencies that are high enough (25% plus), to justify the cost of the additional and more advanced process steps.

9 June 2022
The proliferation of solar PV and other renewables is a cornerstone of the emerging new power system and, as a result, the solar industry has entered its fastest-growth period. This has become typified by surging demand for high-power PV modules that both produce more power and are more efficient than their predecessors. Providing a significant boost to power outputs, large-format modules have become a popular choice for customers the world over. Outdoor testing of modules is now providing empirical evidence of the benefits large-format modules produce, providing a crucial benchmark and invaluable data for customers to evaluate their module selection and procurement processes. In this PV Tech webinar, experts from TÜV Rheinland, CPVT and Trina Solar will discuss how to ensure science based and precision testing under field conditions, how empirical data is collected and analysed during TÜV Rheinland and CPVT’s outdoor testing, the empirical data behind a 670W module’s ultra-high power, and more.
c-si manufacturing, hanergy thin film power group, hanwha q cells, heterojunction back contact, ibc solar cell, isc konstanz, jinko solar, kaneka, lg electonics, longi solar, monocrystalline wafer, n-pert, n-type mono perc, p-type mono perc, panasonic, pv celltech, solar cell, sunpower corporation, topcon, trina solar