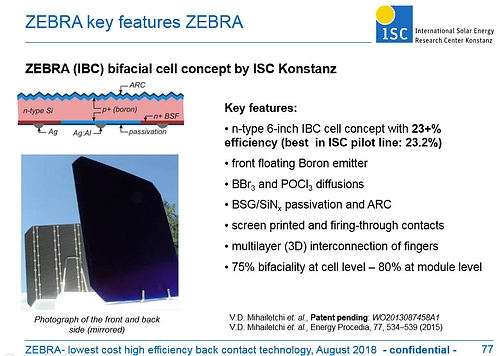 Coming out of stealth-mode, US-based integrated PV panel manufacturing start-up, Violet Power intends to disrupt the PV industry with in-house production of high-efficiency IBC (Interdigitated Back Contact) solar cells. The company will use cell-to-module ‘flex circuit’ and thermal plastic encapsulant technology in a glass/glass configuration that will have a solar panel warranty of 50 years, more than three times the average in the industry, today.

US-headquartered SunPower, which manufacturers its high-efficiency IBC solar cells in Asia (Philippines and Malaysia), currently offers a 30-year warranty on its Maxeon Series panels, the highest in the industry.

Charlie Gay, PV industry technology veteran (more than 45 years), who has recently become the new CEO of Violet Power, said, “There are currently no vertically-integrated U.S. PV panel manufacturers to meet the growing global demand for solar power. This lack of manufacturing capability within the United States results in billions of dollars in lost opportunity including jobs, wages, and revenue for American workers and government at the local, state, and federal level. In addition, there are serious concerns over supply chain self-reliance and electric grid security, which can be best addressed with control of the entire value chain. Violet Power’s manufacturing model addresses all of these concerns, and more.”

PV Tech talked to Charlie Gay about how the start-up intended to disrupt the PV manufacturing industry with solar panel technology that could financially justify offering a 50-year warranty.

The core of the solar cell technology comes from a collaboration with German-based R&D centre, ISC Konstanz and its head, Radovan Kopecek and his team. The ‘ZEBRA’ IBC cell, which was developed as a low-cost IBC cell architecture using front floating emitter (FFE) and screen-printed and fired-through metallization made on large-area 152.4mm n-type monocrystalline wafers has been further developed at Violet Power to include a ‘flex circuit’ (aluminium) backside cell to module contact technology coupled to thermal plastic encapsulant technology in a glass/glass configuration. Zebra IBC cell has been reported to have 24% plus conversion efficiencies.

The results are claimed to provide improved cell-to-module losses, reduced lifetime degradation and higher resistance to moisture ingress that was at the heart of ability to offer game-changing panel reliability that transfers to the lowest Levelized Cost of Energy (LCOE).  Some of these technologies were developed under multiple U.S. Department of Energy sponsored R&D programs, according to Gay.

Asked how the company would back-up the game-changing warranty claims, Gay confirmed that it would have the IBC panels go through PV Evolution Labs’ (PVEL) Product Qualification Programme (PQP). The PQP is a comprehensive, rigorous test regime that assesses reliability and performance of PV modules and well known for its annual ‘PV Module Reliability Scorecard’ report that is the benchmark for module reliability testing.

“What Violet Power is doing is differentiating on quality,” noted Gay.

However, the company will also be differentiating on carbon footprint with hydro-electric power for all manufacturing processes from polysilicon, wafering as well as cell and module production. The wafering operations will be in partnership with a Northern European wafer producer with direct connections with REC Silicon.

Violet Power’s first state-of-the-art integrated manufacturing facility will be based in Moses Lake, WA, across the road from REC Silicon’s high purity polysilicon plant and near to several Guardian Glass production plants in the state, according to Gay.

Desari Strader, Violet Energy’s President and Founder, said, “Violet Power is poised to re-establish world-class solar manufacturing leadership here in the United States where the technology was first born. We are deeply grateful to the State of Washington and the U.S. Department of Commerce for their leadership and support and focus on American manufacturing, which was critical in making Moses Lake the ideal location for our home.”

“Washington state is a leader in the global clean energy future and the addition of Violet Power’s production of solar cells and modules adds to our vibrant clean tech industry,” said Gov. Jay Inslee.  “Violet Power will build on our state’s great tradition of renewable energy production, and I am pleased they are committed to supporting the continued development of a complete solar manufacturing supply chain with REC Silicon and others. These efforts will be essential to growing 21st century green jobs in Washington.”

Charlie Gay also confirmed that Violet Power had been the undisclosed planned customer of Swiss-based solar equipment supplier, Meyer Burger back in July, 2019 having placed a CHF 100 million (US$101 million) initial order for the equipment suppliers core Heterojunction (HJT) equipment.

However, Meyer Burger announced in June 2020 that it planned to become a dedicated manufacturer of HJT solar panels in Europe and the US and exclusively use its technology in-house, forgoing its PV equipment supplier and JV business models.

3 May 2023
Large Scale Solar Summit is coming back to the US after a sell-out year in 2022! Designed as a meeting place for deal-making, we will not only discuss the most up to date topics and technologies but will also provide varied networking platforms so that developers, EPCs, manufacturers, asset owners, and investors can connect with possible clients and partners. Join us in Texas to meet with the top players in the industry and expand your network as business booms.
c-si manufacturing, interdigitated back contact, isc konstanz, module assembly, monocrystalline wafer, pv modules, rec silicon, sunpower corporation, usa, violet power, wafering